CELTIC have thanked Mohamed Elyounoussi, Diego Laxalt and Jonjoe Kenny for their contributions during their loan spells at the club last season.

The Hoops officially confirmed in a tweet the players had returned to their respective parent sides Southampton, AC Milan and Everton.

Mysteriously, though, there is no mention of Shane Duffy who arrived at his boyhood heroes from Brighton in a £2million temporary transfer in September. After a goal each in his first two games against Ross County in Dingwall and St Mirren in Paisley, the Republic of Ireland international centre-back endured a torrid time in a massively disappointing campaign for the individual and the team. 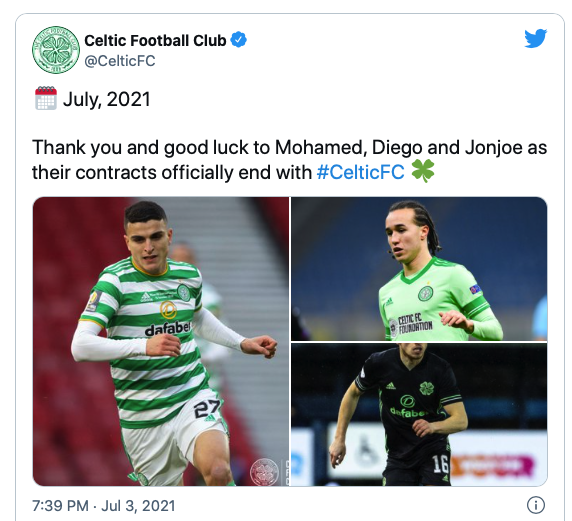 The defender returned to the Amex Stadium with two games of the season still to run and the player sent a heartfelt message to the club and the supporters, as CQN reported in May.

Elyounoussi also expressed gratitude to the club during the week as his two-year stay came to an end. The Norwegian international scored 24 goals in 67 appearances.

Uruguayan left-back Laxalt is on his way to Dinamo Moscow in a four-year deal while Kenny faces a third loan spell away from Goodison after stints at Bundesliga outfit Schalke and Parkhead.