BRENDAN RODGERS will set Kieran Tierney a deadline tomorrow to prove he is fit enough to face Valencia at Parkhead on Thursday night.

The Celtic left-back has been out of action for TWO months with a hip injury and made his last appearance in the 2-1 defeat against RB Salzburg in the Europa League Group B encounter in Glasgow on December 13.

However, Tierney is desperate to play in the last-32 first leg confrontation against the Spanish side and is hoping to convince his manager he is up to the task. 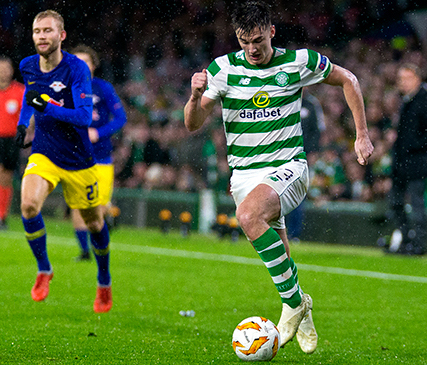 BHOY RACER…Kieran Tierney races away from an RB Leipzig defender.

Rodgers is faced with utilising winger Jonny Hayes in the No.3 position, as he did in the 5-0 Scottish Cup win over St Johnstone on Sunday.

Emilio Izaguirre is almost certainly out of the reckoning following the clumsy challenge by Hibs defender Darnell Johnson in the Hoops’ 2-0 win last Wednesday. The lunge saw the Honduran carried off on a stretcher with Hayes replacing him for the remaining eight minutes.

Tierney, 21, returned to light training last week and has been gradually pushing himself towards a full recovery.

He has not suffered any setbacks, and is looking to show his manager he will be able to last 90 minutes of hectic action against La Liga outfit.