We are going to see a lot of people in their true light through this.  Last night, Scott McGarvey, son of Celtic legend Frank, put his prized, signed, Roy Keane Republic of Ireland jersey on ebay to raise money for Glasgow South East Foodbank.  Their need, like so many others who cater for the poor, has never been greater.

Scott got the match worn shirt from Roy’s Ireland, and Frank’s Celtic, team-mate, Packie Bonner.  It is a rare and cherished piece of sporting memorabilia. Keep an eye on the auction here.  If you don’t have a wall for it, you can always move house. 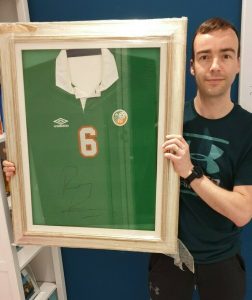 Hearts “chairman’s statement”, (self-identifying is ‘so Edinburgh’)* issued by Ann Budge last night, was worthy of a read.  If you can look past the close-up of Mr Budge (she started it) occupying all real estate above the fold, she had an obligatory kick at The Sun for an earlier article bereft of the basic grasp of business, before getting onto the matter in hand.

Hearts, like almost every other club in Scotland and most in Europe, had no contingency for what she tells us all of football knows is a shutdown until “late July/August”.  It was either cut costs early or make people redundant eventually.  Earlier this week we heard from Aberdeen, those two are as ready for this crisis as anyone apart Celtic, but neither is in a good place.  At least Aberdeen know they will play top flight football next season.

Budge was first to move and put staff and players on 50% salary, with minimum wage protections.  Many others will follow.  Stenhousemuir are showing the way for clubs who know they can rely on fans to keep their club alive (yes, Stenhousmuir fans can do what others cannot).  On Wednesday, their chairman, wrote, “We’ve had a surge in people wanting to buy shares in the club.  Many have.  Welcome to The Warriors.  We’ve had people making donations, and lots more offers too.”

These are hard times, but many clubs with either be saved by the largess of their fans, or will perish in the summer.

Remember to check out the Roy Keane auction.