Celtic Quick News on News Now
You are at:Home»Lions & Legends»“Simpson, Larsson, Gemmell, Murdoch, McNeill and Clark…”
By CQN Magazine on 20th September 2015 Lions & Legends
BERTIE AULD has never been an individual to pass up the opportunity for a little piece of mischief.
His fellow-Lisbon Lion Jim Craig should have been better placed than most to see a light-hearted barb coming his way. On this occasion, though, he was taken totally on the backfoot. 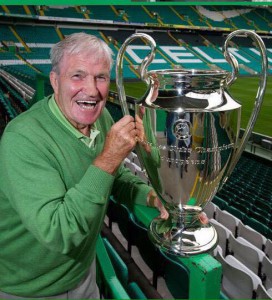 The man nicknamed Cairney by his team-mates was doing a stint as interviewer for Celtic TV when he chose Wee Bertie as a subject for a chat.
Eventually, after exhausting memories of Jock, Jinky and Co, the talk got round to Henrik Larsson, at that stage proving the £650,000 Celtic paid to Feyenoord for him in the summer of 1997 was the best cash they had ever shelled out in the transfer market.
A relaxed Craig, sitting in the studio, said: “Bertie, we all know how good Henrik is. However, I’ve got a tricky question for you – was he good enough to get into the 1967 European Cup-winning side? And if he was, who would you drop to make way for him?”
Bertie thought for a moment. ‘Oh, that’s a good question, Cairney. Without a doubt, I think he would have qualified as a Lisbon Lion. He had everything we looked for in that team; flair, a hard-working ethic, an eye for goal and, of course, he was such a good team-mate on the field while always doing his very best for the side and not himself. He would have to get into that team.”
“Fair enough, Bertie,” nodded the genial Craig. “So, my next question is – where would you put him in the team? Or, more accurately, who would you drop?”
“Another tough one, Cairney,” said Bertie, thoughtfully rubbing his chin. “You better give me a minute to think. I’ve got to get this right.”
The midfield maestro pondered for awhile. At length, he announced: “Okay, I’ve got it now. The decision is made.”
Craig, as you might expect, was more than a little interested in Auld’s momentous decision. “Okay, Bertie, reveal all, please,” he said.
“Are you ready for this, Cairney?” teased Bertie.
“We are all waiting with baited breath, Bertie, the floor is yours.”
“Okay,” said Bertie. “My team would line up like this: Simpson, Larsson, Gemmell, Murdoch, McNeill and Clark…”
Poor Jim was out and Henrik was in!
The King of Kings, Henrik Larsson, celebrates his 44th birthday today.
From everyone who posts on CQN, thank you for the memories, Henrik…and the 242 goals and the avalanche of silverware, of course.
Click Here for Comments >
Share. Twitter Facebook Google+ Pinterest LinkedIn Tumblr Email
Previous ArticleCOLE TO TRAIN WITH CELTIC
Next Article ‘MARSHALL RED CORRECT’