SCOTT SINCLAIR doesn’t want to hang around on unlucky 13 for too long.

The Celtic attacker will go into Sunday’s Premiership encounter against St Johnstone at McDiarmid Park on Sunday hoping to claim his 14th goal of a prolific campaign.

Sinclair has returned to scoring form in recent months and has played his part as the champions notched up their 12th successive league win at Parkhead with the 2-0 success over the Perth outfit in midweek to go six points clear at the top of the table.

However, the Englishman, one of Brendan Rodgers’ first buys for the club when he arrived in a £4.5million deal from Aston Villa in August 2016, admitted he not even thinking about personal glory, but concentrating on the team.

He said: “I go into every game wanting to score and obviously where I’m at now and where I’m playing, I’m confident in every single game I’ll get a chance and an opportunity to do that. 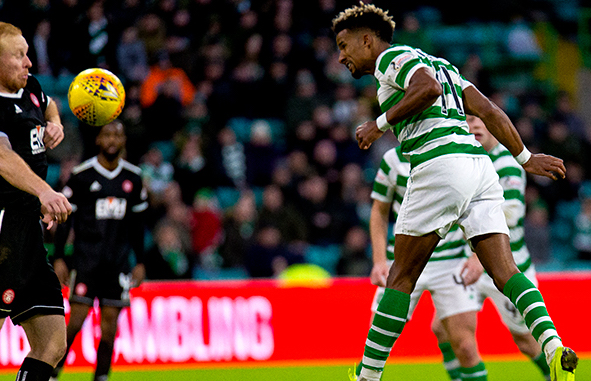 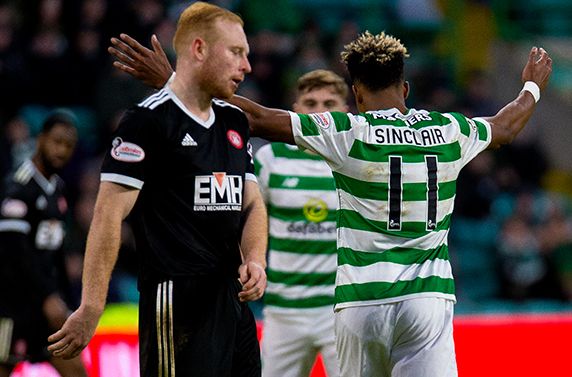 JOY BHOY…Sinclair waits for the congratulations from James Forrest. Ziggy Gordon doesn’t share in the happiness.

He said: “The new boys have been great. For them to come to a new club and to hit the ground running in the way they have done, that’s the best thing to do as a new player and they’ve done that. They’ve scored goals and they’re exciting to watch.”

The 29-year-old, who has also played for Manchester City and Swansea, is also delighted at the return of Israeli international midfielder Nir Bitton who had been sidelined with a knee problem for 11 months.

Sincalir added: “Having boys coming back in from injury gives players competition for places. It’s been great for Nir as he’s been out for so long.

“He looks in great shape, he looks like he’s raring to go and adds that quality to the team.”

* Sinclair was speaking to this week’s Celtic View, on sale now.