Celtic Quick News on News Now
You are at:Home»Latest News»SINCLAIR SPELLS IT OUT
By CQN Magazine on 21st January 2019 Latest News

SCOTT SINCLAIR knows what to expect in the second half of a crucial season – and the flamboyant attacker insists Celtic have the resources to overcome the challenges.

The two-goal hitman in the 3-0 Scottish Cup win over Airdrie at Parkhead on Saturday believes Brendan Rodgers has the best pool of players in the country.

Sinclair said: “We’ve got loads of games coming up and it’s about performing AND winning. Every game we go into, we MUST win.

“But we don’t want to get ahead of ourselves. We’ve just got to take every game as it comes to make sure we get results and we keep performing.”

The Hoops were without the injured Kieran Tierney, Odsonne Edouard and Olivier Ntcham against the League One part-timers while Leigh Griffiths is still sidelined with personal issues. 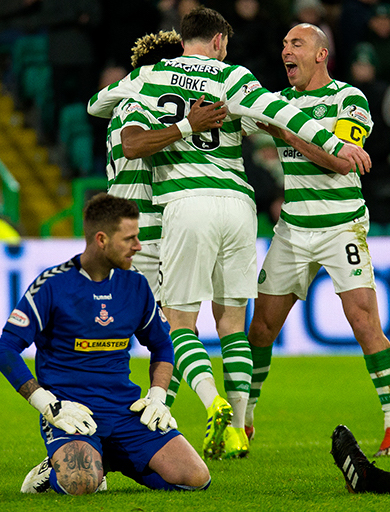 CHEERS AND TEARS…Scott Sinclair is congratulated by Oliver Burke and Scott Brown after his second goal – but Airdrie keeper David Hutton doesn’t share in the joy.

New £2million striker Vakoun Issouf Bayo is expected to arrive in Glasgow this week to bolster the side’s attacking options while a deal for left-back Andrew Guzman is also expected to be finalised within the next few days.

Israeli international midfielder Nir Bitton was also welcomed back for his first appearance since last February when he came on for the last nine minutes in place of skipper Scott Brown.

On-loan double-act Oliver Burke and Timothy Weah also played in the Cup-tie and the Paris Saint-Germain teenager made an instant impact by claiming the third goal with a clever run and slick finish.

Asked if he believed his manager still had the strongest squad in the country, Sinclair replied: “Yes, I would say so. For us, it is all about battling and all about competing.

“It all comes from our training. We’re all hungry – just as hungry as we were in our first season. But it is up to us to perform.”

Sinclair was denied a hat-trick by a dreadful wrong call from an assistant referee, but earlier fluffed his second penalty-kick of the season.

The former Manchester City forward, who cost the Hoops £4.5million when he joined from Aston Villa in August 2016, missed from the spot in the Betfred League Cup Final against Aberdeen at the start of last month.

Thankfully, a first-half strike from Ryan Christie ensured the trophy was heading back to Parkhead for the third successive season and the Englishman’s blushes were spared.

On the Hampden occasion, Sinclair was thwarted when Dons keeper Joe Lewis swooped to his right to push the ball away.irdrie No.1 David Hutton re-enacted the scene at Parkhead when the ball was hit to the same corner and the shotstopper managed to turn the effort wide of the upright.

However, Sinclair claims he is still the man to be entrusted with spot-kick duties and said: “Definitely. I’ve taken some important penalties since I’ve been here, I can think of numerous occasions.

“I’ll always step up, I’ve always got that confidence, and the next time I’ll put it away.

“The goalkeeper went the right way and made a great save. But, like I say, the next time I take a penalty I’ll put it away.”