SCOTT SINCLAIR is ready to stand up and be counted at Ibrox tomorrow afternoon.

The Celtic attacker is high on confidence after his scintillating hat-trick in the 4-3 triumph over Aberdeen at Pittodrie that took his Hoops’ goal haul to 52.

Sinclair is aiming to bring down the curtain on a rousing 2018 with a grand finale in Govan in front of only 750 of the team’s own supporters.

However, that won’t faze the Englishman who said: “I’m sure it’ll be a little bit different in terms of the crowd.

“But, for us as players and professionals, we get our heads down and forget about things like that. We just try to make sure that we play good football.”

Sinclair has stormed back into Brendan Rodgers’ first team with a series of excellent displays after a stuttering start to the campaign where he found difficulty in getting into his stride. However, he insisted he has come out the other end of his shade in form.

He said: “I think that, sometimes, you have got to go through tough times.

“The first years that I have been here at Celtic, there has been nothing better. There was no negativity, just all positive. 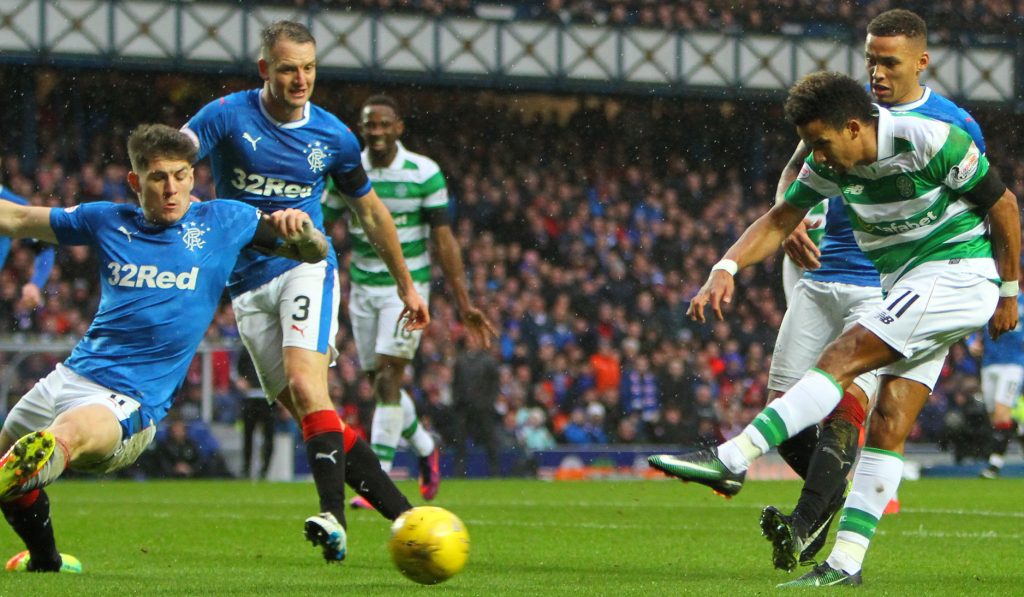 WALLOP…Scott Sinclair fires in a shot at Ibrox despite being surrounded by Rob Kiernan, Clint Hill and James Tavernier. Moussa Dembele looks on. Pic: Geo.

“But there is always going to come a time when you get negativity, but, for me, it’s about just getting head down and continuing to keep working hard and having a never-give-up attitude, which I’ve always had.

“It’s the same for everyone. It’s how you perform on the weekend and also during the week in training.

“For us, you never get complacent, make sure you always give 100 per cent and keep working on your game.”

Two years ago, Sinclair took centre stage in the Hogmanay fixture at Ibrox when Rodgers’ team had to come off the ropes after conceding a goal to Kenny Miller.

Moussa Dembele walloped in the equaliser shortly afterwards and his team-mate made certain the points were heading back to Parkhead when he materialised at the back post in the 70th minute to ram the winner behind Wes Foderingham.

And he slotted home a penalty-kick four months later on the same ground when the Hoops proved unstoppable in a runaway 5-1 triumph.

Sinclair is looking to make his mark at Ibrox again tomorrow as the champions aim to extend their lead at the top of the Premiership to six points with a game in hand.