Neil Lennon’s champions had to settle for 6-0 with Mohamed Elyounoussi starting and completing the rout with Odsonne Edouard (2), Callum McGregor and James Forrest adding the others.

But for a fine performance from the former Hibs No.1, there is little doubt the Hoops would have gone on to hit at least 10. There were also a couple of goal-line clearances from defenders and McGregor smacked one off the post.

Laidlaw may have been on the receiving end of an uncomfortable 90 minutes, but he still paid tribute to Lennon’s men at the end of a landslide display.

The shotstopper, speaking to the Evening Times, said: “It was just the speed of them, they had players coming everywhere. 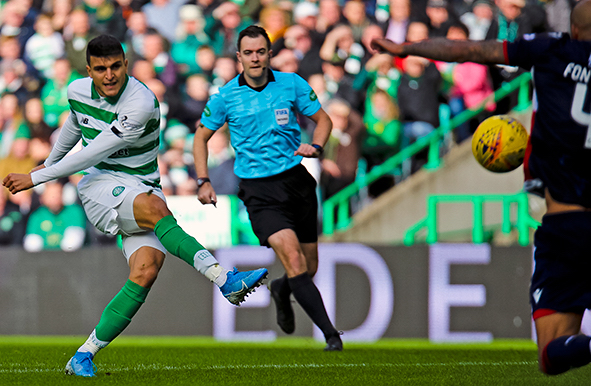 ROUT OF THIS WORLD…Mohamed Elyounoussi fires in an unstoppable right-foot drive for the first goal.

“Their wee right-back (Jeremie Frimpong) was brilliant and they just absolutely killed us in behind in the second-half.

“With the chances they created, they had so many different players who were brilliant.

“I had a few saves to make. I had to, because I don’t think we were at the races.

“We are bitterly disappointed to come here and get beaten 6-0. We caught Celtic on a really good day, they were brilliant.

“It’s still disappointing, because at the end of the day I still let in six goals. That’s not a great feeling after the game. 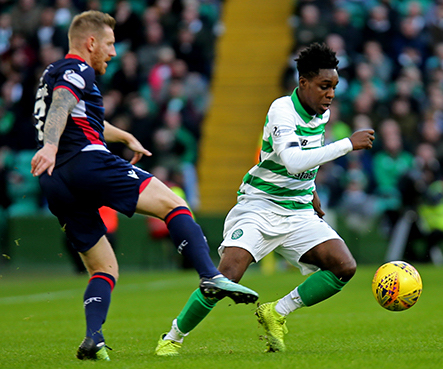 “I just had to try and do what I had to do and keep the ball out of the net.”

Laidlaw added: “It was 4-0 after 50 minutes, and it was just damage limitation at that stage. It was hard to keep ourselves going, but we had to try and do that.

“We just lost a poor goal at the start of the second-half. We made a mistake for that, and I think the heads just dropped.

“With the way Celtic were playing, they were brilliant and we just couldn’t live with them.”

Substitute Vakoun Issouf Bayo, on for Edouard who was given a rest before Lazio come to town on Thursday, can the opportunity near the end to emulate the 7-0 opening-day win over St Johnstone.

Unfortunately, the Ivorian frontman took a heavy first touch and Laidlaw was able to rush from his line and divert his shot.

The keeper at least deserved to end the game on a high.