NEIL LENNON is preparing for six make-or-break domestic confrontations before the turn of the year – and the Celtic manager is hoping it will be home sweet home.

The champions will play five of the games in Glasgow – four at Parkhead and one at Hampden – and the only away trip will be to Hamilton.

Lennon has the opportunity to concentrate completely on business and turning the club’s season around without the distractions of travel, foreign fields and hotel arrangements.

St Johnstone provide the first Premiership challenge when they visit Parkhead tomorrow afternoon and a week later Kilmarnock will be the opposition at the same venue.

The Hoops then face Hearts in the delayed Scottish Cup Final at Hampden on December 20 where they can complete the phenomenal quadruple treble by winning their TWELFTH successive domestic honour.

Three days later they will be handed the opportunity of quickfire revenge on Betfred League Cup conquerors Ross County before a Saturday trip to take on Hamilton Accies on Boxing Day.

Celtic will bring down the curtain on a testing year with a home match against St Mirren on Wednesday, December 30.

The wretched Europa League Group H will also be completed with the visit of Lille on Thursday which will allow Lennon to concentrate completely on making certain there is no stumble on the home front as we see out 2020.

Lennon, speaking to the Daily Record, said: “I know it’s all about perspective, but I don’t think we are a million miles away from being a real force again and a good side.

“We’ve had a few hiccups to sort out and settle down defensively, but, overall, I’ve got to to be pleased with what I got in Milan in terms of quality of performance as I thought we were outstanding going forward and we looked a threat. 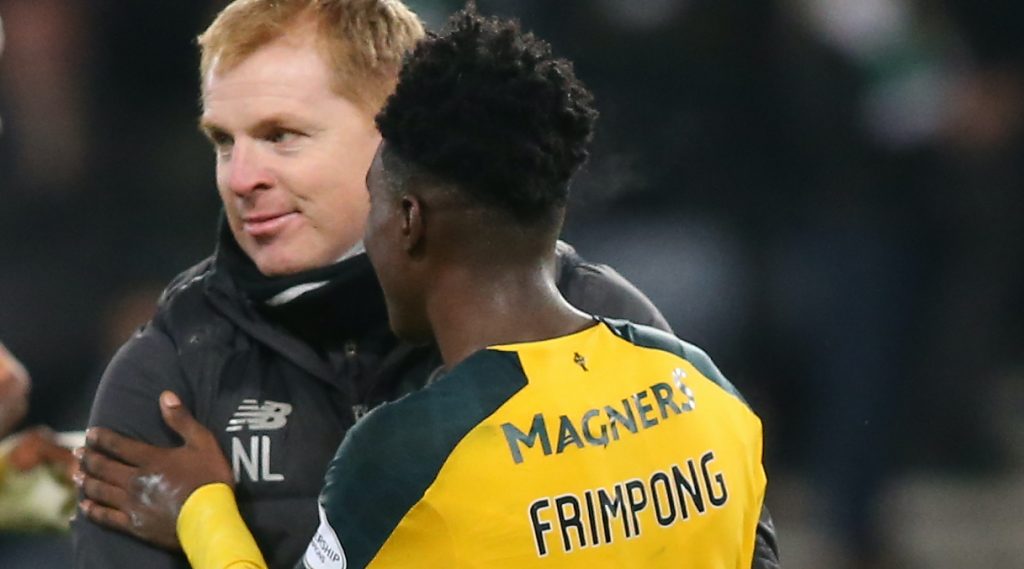 “We played very well under the circumstances and we played with bravery, so we need to take that forward now.”

Lennon admitted he had a word with Jeremie Frimpong before the tie in Milan and the Irishman added: “I had a good half an hour with him.

“He was outstanding in the San Siro. I don’t know if it had anything to do with the chat that we had, but he went out there and played bravely.

“I don’t just want to speak to them about the football. I want to get to know what’s going on with them.

“I want to know how they are getting on Glasgow with the restrictions, how they are coping with it all. They are human beings.

“Jeremie was pretty positive about the whole thing and he’s sort of gone out and it manifested itself in his performance in Milan.

“They are good boys, they are really good lads and they are working really hard.

“I’ve done it with many of them. Senior players, younger players. The response has been good.

“Kris Ajer is still a young man. Ryan Christie is the same, so is Odsonne Edouard.

“We are having a bad run and it’s probably the first one we have had in five, six or 10 years.

“There have been long chats with a few of them over the past few days just to see where we are as a group.

“They are all in it. They are all head-scratching, but they showed on Thursday night what a good team they can be.

“I thought they did a lot of good things in Milan and that pleased me.

“There has been a lot of soul searching from them in the last few days and I got the response I was looking for in Milan.”