NEIL LENNON had 18 players stripped for action the last time the champions of Kazakhstan played at Parkhead.

Amazingly, only SIX players remain at the Hoops since the 3-0 comeback win against Shakhter Karagandy under three years ago. 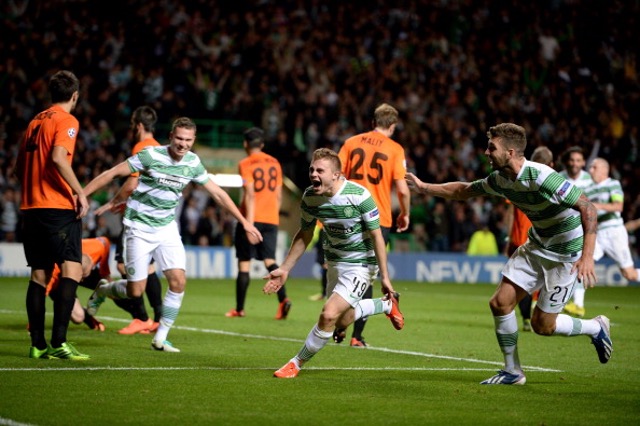 And, of course, the manager and his backroom team have also moved elsewhere with Lennon now in charge of Championship outfit Hibs.

James Forrest got the last-gasp winning goal after Kris Commons and Georgios Samaras had levelled the tie on a 2-2 aggregate in Glasgow on August 23 2013.

It’s a phenomenal turnaround in staff and even Lennon’s successor, Ronny Deila, has been replaced in the summer by Brendan Rodgers. 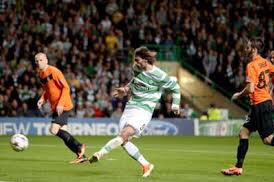 Here’s a rundown of the Celtic squad that night:

FRASER FORSTER: The English international keeper was a massive favourite with the Parkhead faithful, but he was sold to Southampton the following year for £10million.

ADAM MATTHEWS: Moved to Sunderland for £2million last year, but made only two first team appearances for the Stadium of Light outfit. Now on loan at Bristol City.

EFE AMBROSE: Despite criticism, the Nigerian international, bought Lennon for £1million from Israeli outfit FC Ashdod four years ago, is still in place and could face Astana.

CHARLIE MULGREW: Stalled on the offer a contract extension in the summer and has been interesting Championship side Sheffield Wednesday.

MIKAEL LUSTIG: The Swedish international was virtually an ever-present at right-back last season under Deila, but could figure in central defence against the Kazahks this evening as Rodgers plots a path towards the play-offs and the £20million group stages.

SCOTT BROWN: The skipper and midfield dynamo was booked last week in Astana and was yellow-carded, too, in the second leg against Karagandy. Now 31, but a key man for Rodgers.

KRIS COMMONS: The clever midfield schemer has yet to figure under the new manager as he attempts to get back to full fitness. He has scored 10 goals at European level.

SUB: DERK BOERRIGTER: The Dutchman cost £3million when he arrived at Parkhead from Ajax three years ago – and the winger proved to be a complete waste of money. He came on for Commons in the 79th minute. He was released on April 4 with a year still to run on his contract.

JOE LEDLEY: The popular Welsh international arrived on a Bosman from Cardiff City in the summer of 2010 and was sold for £800,000 to Crystal Palace on January 31, 2014 as his contract was coming to an end.

JAMES FORREST: The last-minute goal hero put the Hoops through to the money-spinning group stages, but the winger could be on his way with his contract due to expire this season.

SUB: VIRGIL VAN DIJK: He came on at the death for Forrest as Lennon went through the motions of running down the clock. The classy Dutchman joined Forster at Southampton last season in a £13million move.

GEORGIOS SAMARAS: The enigmatic Greek made it 2-2 on aggregate with an effort shortly after the interval. He left the club at the end of his contract in the summer of 2014 and joined West Brom in August. He has also played in Saudi Arabia and the States after flopping at the Hawthorns.

ANTHONY STOKES: A great run to set up the winner for Forrest. However, he fell foul of Deila last season and was loaned to Hibs in January. The Republic of Ireland hitman netted twice in the Easter Road side’s 3-2 Scottish Cup Final win over Rangers. He was released by Rodgers and joined Blackburn Rovers in the summer.

LUKASZ ZALUSKA: The back-up to Artur Boruc, Fraser Forster and Craig Gordon never made the No.1 position his own. The Pole left last year for German outfit SV Dramstadt before joining Wisla Krakow last month.

EMILIO IZAGUIRRE: It looked as though the Honduran defender was on his way at the end of the last campaign after losing his left-back spot to Kieran Tierney. He is now in the last year of his Hoops deal.

AMIDO BALDE: The Portuguese striker failed to make an impact after his £1.28million arrival from Vitoria Guimaraes. Was released and joined French side Metz in July last year and is now with Angolan outfit Benfica Luanda.

TONY WATT: Had been the matchwinner against Barcelona the previous season, but didn’t see any action against Karagandy. The striker joined Hearts on a season-long loan from Charlton last week.
THIS AIN’T NO BEDTIME FAIRYTALE!

Get your copy of the fantastic fantasy story book about the death of Rangers and the emergence of the pretendy new club. All the colourful characters on this saga are included in the book that has the Zombies raging! You’ll love it!
Only from www.cqnbookstore.com priced at £9.99 while stocks last. After reading it a few times pass it on! The more Tims who enjoy it the better!