SCOTT BROWN has praised both sets of supporters for their reaction to the unacceptable sick taunt he received as he left Ibrox after Celtic’s 2-0 win at the start of the month.

The Hoops skipper was preparing to board the team coach when he was subjected to a vile comment over the death of his sister Fiona.

A 15-year-old boy was arrested and charged after the sickening verbal assault.

Brown was clearly stunned when he heard the remark from the yob. The Hoops captain’s sister died from skin cancer in 2008 at the age of 21.

However, the 34-year-old midfielder, who played a starring role in the crucial victory, admitted he was happy to receive an apology from the Ibrox club amid other support. 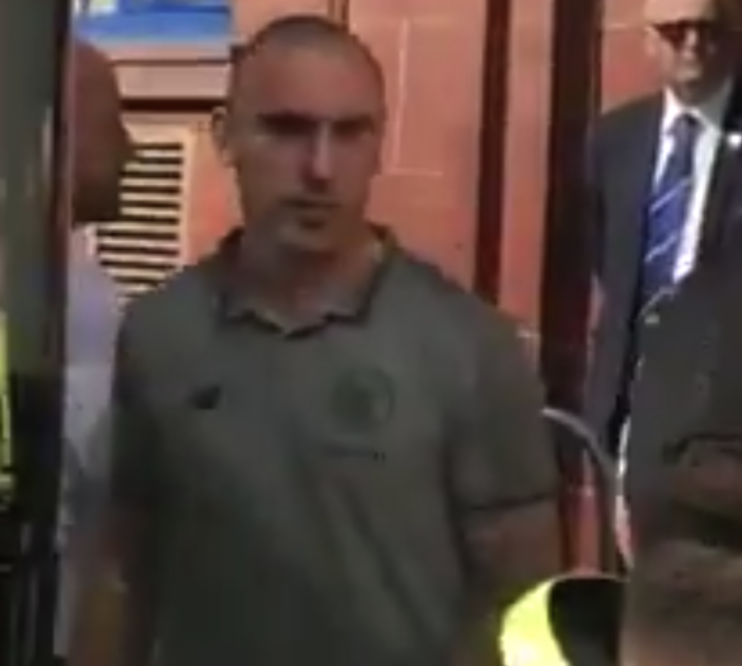 STUNNED…Scott Brown reacts to the sick taunt outside Ibrox.

The former Scotland international stalwart, speaking to the Daily Mail, said: “They (Rangers) sent an email, so that was lovely of them to actually do that.

“Fans from both sides were phenomenal, to be honest.

“It’s not just one incident, it’s happened over the last 12 years of my career. It’s hard, it’s sad and it shouldn’t be happening.

“‘I play football, I play to win. Ninety minutes, you can shout and swear at me as much as you want on the park, but don’t go into detail off the park like that.

“For me that’s finished with. It’s about me focusing on football now and continuing winning games.

“People can just shout and say what they want and think it’s appropriate, but, for me, it’s just about getting over that and focus on playing football again.

“It’s always difficult (not to react), but I don’t want to keep talking about that situation.”

It’s business as usual for Brown and the champions when they take on Hamiton Accies on Saturday as they attempt to preserve their 100 per cent start which has seen them win all four Premiership outings while racking up 17 goals.