The Celtic ace, who had come on for Andy Considine in the 68th minute with the Scots trailing 1-0, must have thought he had snatched a UEFA Nations League draw for Steve Clarke’s men with the last kick of the game.

Griffiths timed his run on the left to perfection to take a pass into his stride and he walloped in an angled left-foot drive that looked to be zeroing in at keeper Marek Rodak’s far post.

Somehow the Slovakian shotstopper somersaulted across his line to get the merest of touches to send the ball just past the upright.

Before Scotland could take the corner-kick, ropey Romanian referee Istvan Kovacs, who booked five of the home team, blew for time-up.

Ryan Christie looked as though he had been singled out for some special treatment and Slovak tough guys Peter Pekarik and Robert Mazan were both yellow-carded for dreadful assaults on the Hoops playmaker.

Scotland had the chance to win the group this afternoon, but they will have another opportunity to complete the job against Israel in Tel Aviv on Wednesday night. 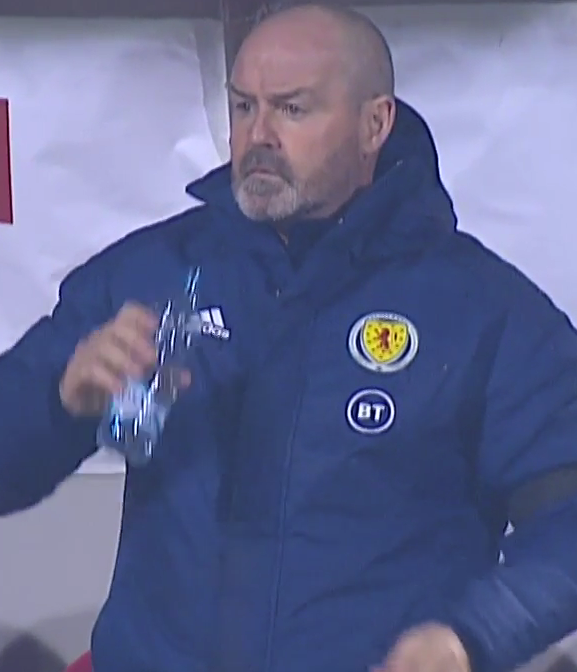 It was hit and miss for the Scots in the first-half as they went in at the interval trailing to 31st-minute effort from Jan Gregos that left Craig Gordon flat-footed as it edged its way towards his right-hand corner of the net from 25 yards.

Boss Clarke had seen his side construct some fine moves, but, unfortunately, the best of them fell to Oli McBurnie and Liam Palmer and between them they failed to hit the target on four occasions.

The striker, who went into his 14th international without a goal outwith his penalty strike in the Europa Play-Off win over Serbia Belgrade on Thursday, had two reasonable opportunities, but squandered them.

In the 10th minute, Stuart Armstrong sent him running clear into the box with only the keeper to beat, but the Sheffield United frontman dithered and the chance was gone.

Close to half-time, he was presented with another decent opportunity when he got on the end of a right-wing cross, but his header was straight at Rodak who saved easily.

Defender Palmer looked as though he would open the scoring in the sixth minute when Christie stabbed the ball in front of him, but he blazed waywardly over the bar.

He followed that up later on when he got on the end of a deep cross, but once more he ballooned the ball wildly off target.

In the midst of all this, the home side moved upfield with a sequence of clever passing and the ball ended at the feet of Gregos and he sent a right-foot effort wide of Gordon who was frozen to the spot. The only explanation could be the netminder was unsighted with a few bodies in front of him or it took a nick off a defender.

Armstrong. who also sent one wide when he should have hit the target in the 42nd minute, picked up a booking from the fussy and erratic match official and the Southampton midfielder will now miss the midweek match against the Israelis. John McGinn was also yellow-carded as the first-half drew to a close.

With the greatest of ironies, match official Kovacs, clearly in love with the sound of his own whistle, booked Christie for a challenge in stoppage time.

Griffiths also had an opportunity to score just moments before he was denied at the death, but once again Rodak made a fine diving save to his right.

And the Slovakian shotstopper bailed out his nation when he made a flying leap to push away a thunderous header from Kenny McLean after some good work on the left by Kieran Tierney.

The Scots couldn’t match their first-half performance and paid the price.

But there is still a lot for gaffer Clarke to feel a sense of optimism before the encounter against Nir Bitton, Hatem Abd Elhamed and Co on Wednesday.