CELTIC’S reported interest in Brazilian star Vinicius Souza is poised to come to an end.

The SC Lommel midfielder appears to be on the brink of agreeing a season-long loan with Espanyol who finished 14th in La Liga last season.

Souza, who played for Belgian outfit Mechelen on a temporary transfer deal the previous term, will jet into Barcelona to put the finishing touches, according to Spanish media sources. 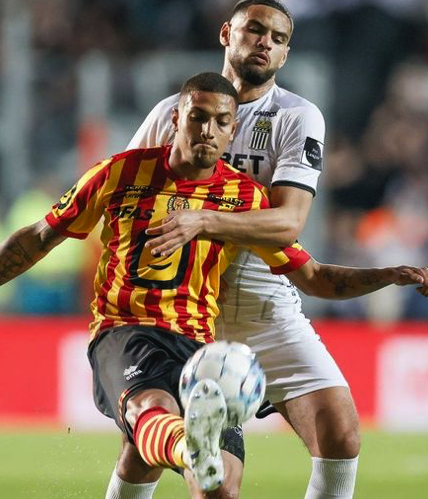 NO GO SOUZA…the Brazilian in action for Belgian club Mechelen.

Lommel are a part of the City Football Group, headed by parent club Manchester City, who are said to be against allowing the 24-year-old enforcer to leave on a permanent switch.

Ange Postecoglou will continue to scour the market for at least two more recruits and has once again been linked with Sheffield United right-back George Baldock.

The England-born defender is a Greece international team-mate of Giorgos Giakoumakis and has made four appearances for his adopted country.

Twenty-nine-year-old Baldock, who is under contract with the second-tier Yorkshire club until June 30 2024, was linked with the Parkhead club last summer before Postecoglou paid £2.5million for Croatia’s Josip Juranovic from Legia Warsaw.

However, he appears to have resurfaced as a potential target for the Hoops boss who has already brought in Cameron Carter-Vickers, Filipe Jota, Alexandro Bernabei and Benji Siegrist at a cost of £17million this summer.