FORMER Liverpool skipper Steven Gerrard has admitted when El-Hadji Diouf spat on a Celtic fan it summed the controversial Senegalese as a person.

Diouf shocked football with his disgusting actions when he gobbed on a Hoops supporter during the UEFA Cup-tie at Parkhead in March 2003.

And Gerrard, now playing in the States after quitting Anfield in the summer, admitted he was the team-mate he hated the most.
Diouf, who also played a season on loan at Rangers and was sent off in a Scottish Cup defeat against the Hoops, was hit by a two-game ban by UEFA and an assault charge for his unacceptable antics. 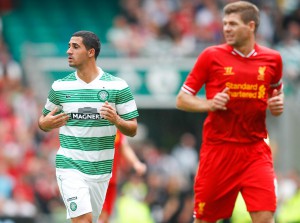 Gerrard makes the frank admission in his newly-published autobiography ‘My Story’. He doesn’t hold back when he talks about Diouf, bought for £10million from French outfit Lens in 2002. The goal-shy ‘striker’ was one of three new signings by manager Gerard Houllier who were meant to turn Liverpool into Premier League champions after finishing runners-up to Manchester United the previous season.
He was joined by Salif Diao and Bruno Cheyrou, but the Anfield legend dismissed the trio of under-achievers as “probably the biggest waste of £18million in Liverpool’s history” when they finished a disappointing fifth.

Gerrard reveals: “It seemed to me that Diouf had no real interest in football and that he cared nothing about Liverpool. For example, the way he spat a huge globule of gunky phlegm at a Celtic fan in a UEFA Cup match at Parkhead in March 2003 summed up his contemptuous and spiteful demeanour.

“A few people have since asked me if I saw any comparison between Diouf and Mario Balotelli – and I’ve always said no. I’ve got respect for Balotelli; I’ve got none for Diouf.”