LEIGH GRIFFITHS flashed in the winner with seven minutes to play and Dedryck Boyata was sensationally sent off in added-on time in an explosive climax to a remarkable League Cup encounter in Perth this evening.

The outcome saw the holders battle through to the semi-final where they have been paired with Hearts, who beat Motherwell 4-2 tonight. The other tie will be between Aberdeen and Sevco Rangers.

However, it looked like a one-way bombardment wasn’t going to yield anything for the Hoops in the regulation 90 minutes as Brendan Rodgers’ men just could not claim the breakthrough goal.

Chances were created and missed with almost monotonous regularity, Saints keeper Zander Clark produced several top-class saves and bodies were thrown in the way of efforts in an Alamo-like siege.

But, astoundingly, the home goal was still intact as the minutes ticked towards extra-time.

WHAT A MISS…Callum McGregor sends the ball wide with keeper Zander Clark helpless.

And then, in the 83rd minute, substitute Tom Rogic slipped a pass wide on the left to the rampaging Kieran Tierney who clipped an inviting cross into the box.

James Forrest took off to send in a header that was blocked by a frantic Saints defender. The Hoops fans were still shouting for a penalty-kick for hand ball when the opportunity fell to Griffiths.

He pounced like a python on its prey as he gathered the ball and thumped a low drive beyond the grasping fingers of Clark.

Boyata then spoke out of turn after Mikael Lustig had been clearly fouled and referee John Beaton, who made a succession of bewildering  decisions throughout an exciting tie, was about to show yellow when the Belgian apparently had something to add. The match official had no hesitation in flashing a straight red card.

Boyata will now miss the last-four clash with the Tynecastle side and boss Rodgers will have a central defensive headache with Kristoffer Ajer limping off in the first-half to be replaced by Jack Hendry.

Filip Benkovic has an Achilles problem, Jozo Simunovic is still attempting to get back to match fitness and Marvin Compper appears to be off the radar. 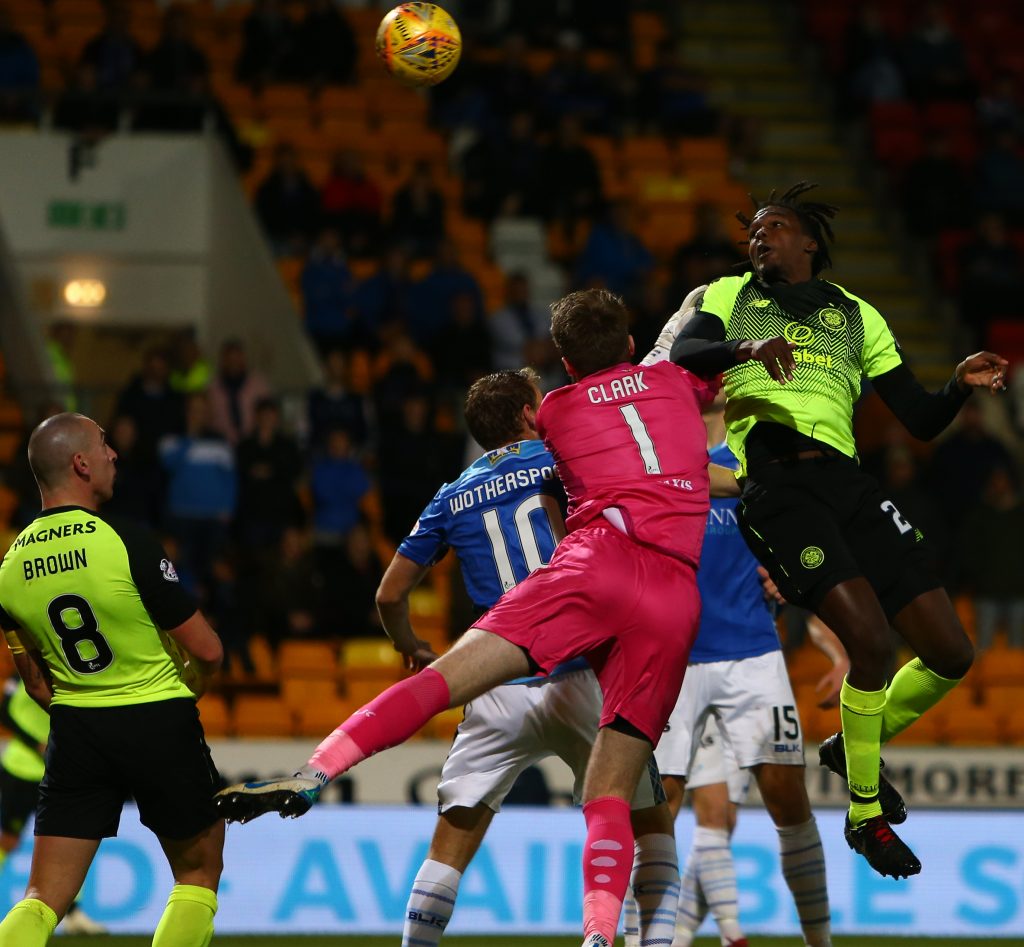 UP AND AT ‘EM…Dedryck Boyata climbs high to pile pressure on Zander Clark and his defenders while Scott Brown looks on.

An appalling miss from Callum McGregor kept the scoreline blank at the interval when he failed to score while clean through on goal in the fading moments of the first period.

Olivier Ntcham slipped an inch-perfect pass into the tracks of the midfielder as he raced clear into the box. Clark was totally exposed and just when it looked as though the all-important barrier-breaking goal was about to arrive, McGregor hit a wretched shot wide of the far post.

The player had been anonymous for almost the entire opening period yet he could have been the man who made the difference if he had allied a modicum of precision to his parting shot.

It was the second time the Saints had been let off the hook in the first 45 minutes.

They got out of jail in the 29th minute when an Odsonne Edouard ball from the left found Griffiths unguarded smack in front of goal.

Astoundingly, the striker, from only three  yards, headed the ball straight at the relieved Clark and his effort bounced to safety. It should have been a goal.

Apart from those opportunities, the Perth No.1 hadn’t been exactly overworked by the holders who were going for a hat-trick of successes in the tournament under Brendan Rodgers.

There was a lot more urgency in their play than was on display in the defeat from Kilmarnock on Sunday.

Boyata was coming forward a lot more often with the ball at his feet and Scott Brown was also in a slightly more advanced role.

Forrest flitted in and out of play, Tierney was putting in his usual shift on the left and Lustig was unfussy on the right.

The Hoops were first to threaten in the ninth minute when Boyata cheekily back-heeled a Griffiths right-wing corner-kick onto the inrushing Ntcham, but the Frenchman didn’t make a proper connection and his low drive trundled past Clark’s left-hand upright.

Saints were absorbing Celtic’s pressing game and even got a shot on target when Liam Craig tried his luck from distance, but Scott Bain held onto the ball as it skidded along the sodden surface.

The one-way traffic continued into the second-half and, within three minutes, Clark was forced to dive low to his left to turn a McGregor drive round the post and moments later he had to throw himself across his goal again to deflect a raging 25-yarder from Ntcham.

In the 51st minute, Boyata headed one over during a goalmouth melee and then Griffiths screwed one horribly wide from an angle when he should have worked the keeper.

At that stage there appeared to be little chemistry between Griffiths and Edouard as a possible frontline partnership and it was no surprise when Rodgers withdrew the £9million Frenchman to make way for Lewis Morgan as he freshened up his frontline.

In the 73rd minute, Griffiths had another miss when he raced clear into the box, but his accuracy was out and Clark managed to stab a right foot at the low drive and deflect it to safety.

THAT WAY TO THE SEMI-FINAL…Brendan Rodgers urges on his troops. Pics: Geo.

A couple of minutes later, Rodgers replaced McGregor with Rogic and the Australian almost made an instant impact with a mighty whack from outside the penalty area that actually hit team-mate Lustig and rebounded to safety.

It was just one of those nights!

Then came the moment of magic that combined the awareness, speed of thought and action from Griffiths that made certain of a place against Craig Levein’s Edinbugh outfit in the semi-final.

The referee played over the two minutes of added-on time which had been indicated and with just seconds to go there was a heart-in-the-mouth moment for the Hoops when Bain alarmingly left his line to deal with a right-wing cross and was caught in no-man’s land as Kevin McMillan got up to head the ball goalwards.

His attempt slipped wide of the far post and justice was seen to be done. The loss of a goal at that stage would have been an absolute travesty.

This win, though, was more about character than confidence in the end.

But no-one can argue the better team won.