Celtic Quick News on News Now
You are at:Home»Match Report»ST JOHNSTONE 0 CELTIC 1: STRUGGLE – BUT IT’S 34 NOT OUT FOR HAMPDEN-BOUND HOOPS
By CQN Magazine on 1st March 2020 Match Report

It was tense and tight when Ryan Christie swung in a free-kick from the right wing. Christopher Jullien raced in front of the Saints defence to the near post and swung a foot at the cross.

The ball travelled beyond the bewildered Zander Clark into the far corner of the net. Both Celts looked delighted and TV images were inconclusive.

It mattered not a jot to the Hoops fans who danced with delight in rain-soaked Perth as the holders booked a semi-final place agaonst Aberdeen at Hampden.

Sportingly, Jullien later admitted the goal should go to Christie as he did not get the final touch as the ball swirled into the penalty area en route to its final destination.

It was never a classic Cup encounter, but Neil Lennon’s men did enough to keep the phenomenal quadruple treble in sight. 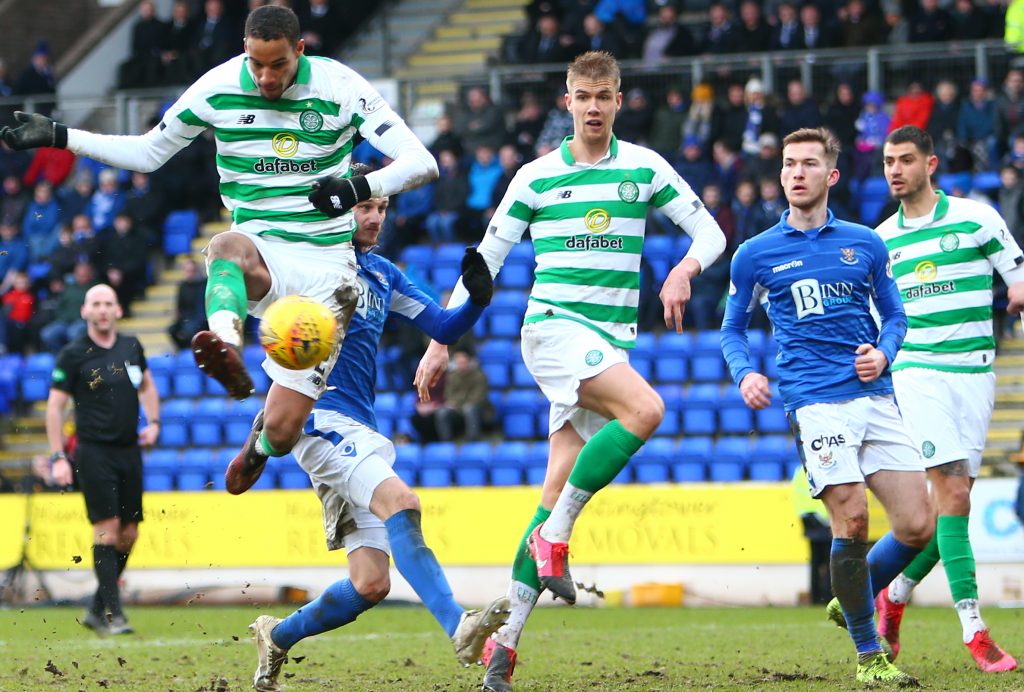 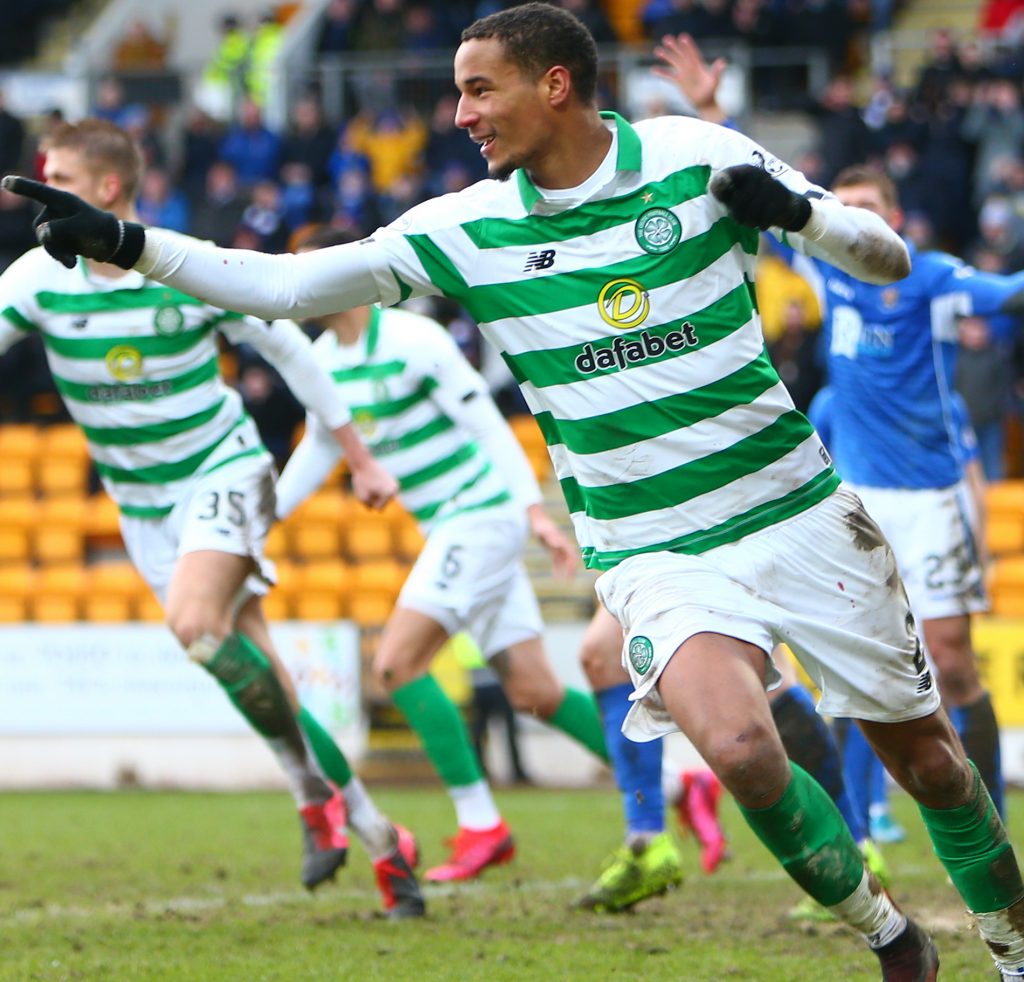 GOOD SIGNS…Jullien appears to point to his Celtic team-mate as the ball hits the target. 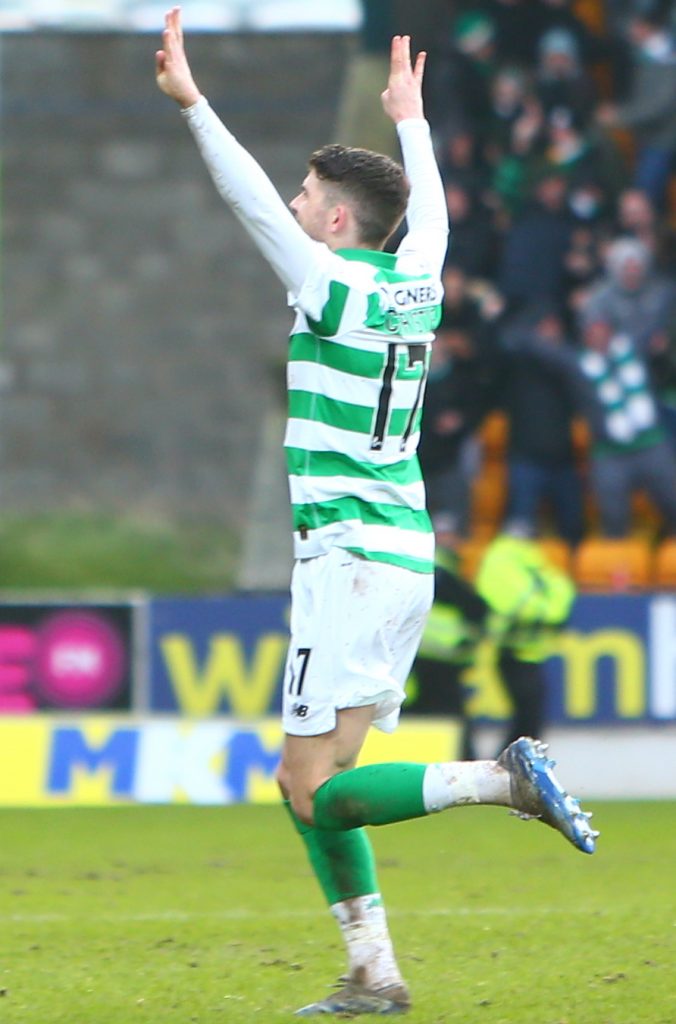 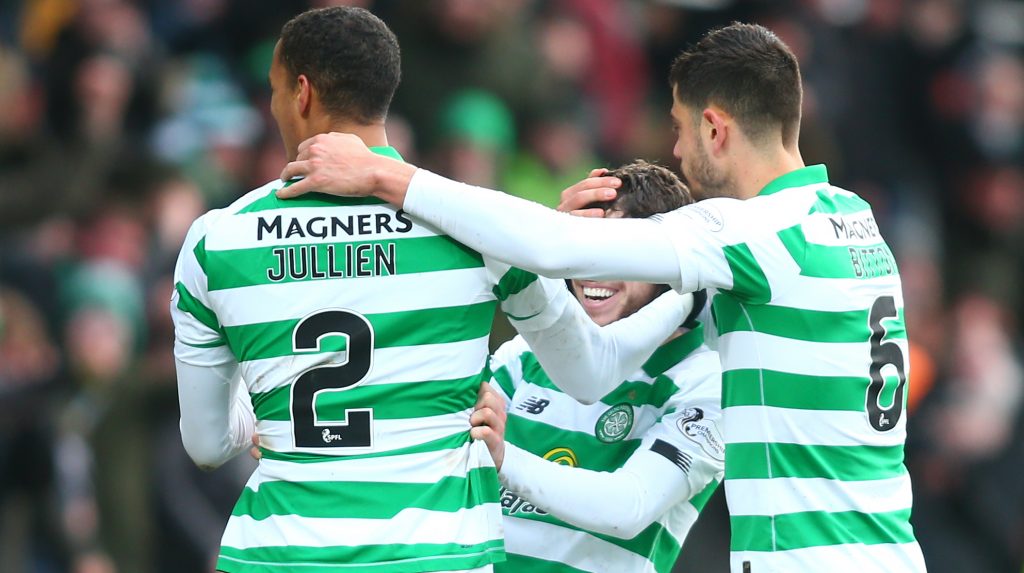 In the third minute, Nir Bitton surged forward on the right flank to pick out James Forrest who sent a pass inside to Christie. The midfielder tried to arc the ball into Clark’s right-hand post from yhe edge of the box, but missed the target by a few feet.

A couple of minutes later, Fraser Forster had to make a diving save to push away a dangerous right-wing cross and only moments later the keeper took a 30-yarder from David Wotherspoon into his gloves.

Liam Gordon went through Leigh Griffiths to get in a crude challenge. Surprisingly, referee Bobby Madden was content to award the Hoops a free-kick without a word of caution for the Perth defender.

Callum McGregor had a wonderful opportunity to open the scoring in the 13th minute after some excellent intricate lead-up play involving Forrest, Greg Taylor, Griffiths and Odsonne Edouard.

The ball was slipped through to the inrushing McGregor who was left with just the keeper to beat, but his parting shot lacked precision and power and Clark was allowed to flop on the effort and hold on at the second attempt.

Matt Butcher was the first name in the book after a clattering challenge on Christie on the touchline.

In the 25th minute, Edouard first-timed a misplaced Jamie McCart header from a left-wing Taylor cross, but his 18-yard effort didn’t trouble Clark.

The Saints, demoralised in the first-half when the Hoops raced to a 3-0 interval lead last month, were clearly determined not to be on the receiving end on this occasion. 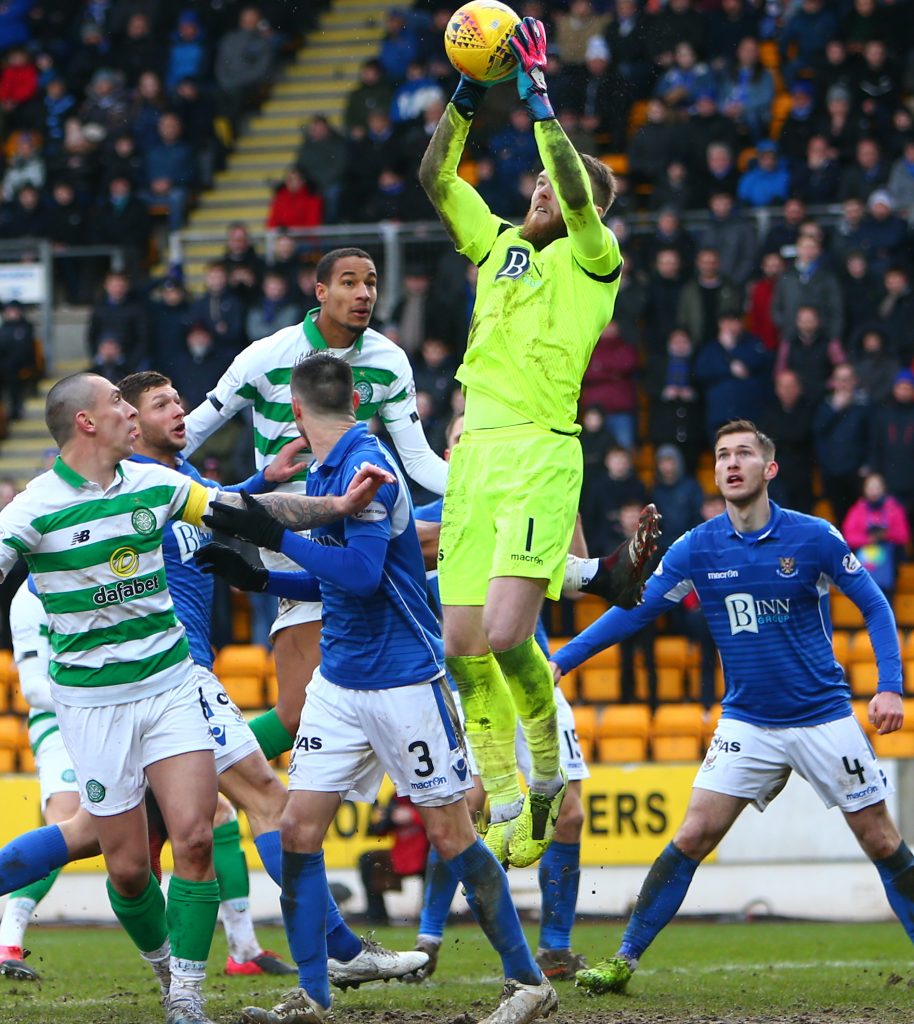 HIGH AND MIGHTY…Saints keeper Zander Clark rises to hold a corner-kick with Christopher Jullien and Scott Brown in the vicinity.

Forrest created an opportunity as he skipped past Scott Tanser on the right, but his low cross was smuggled away by Jason Kerr at the near post as Griffiths raced in.

Forster was required to stretch his full 6ft 7in to turn a dangerous right-wing cross over the bar as the Saints broke from defence.

In the 41st minute, a wayward crossfield pass from Christie was snapped onto by Drey Wright who thumped in a vicious effort from 20 yards, but Forster was alert to the danger as he swooped to his left to touch the ball round the post for a corner-kick.

So far, the Hoops hadn’t look too comfortable in the wet and windy conditions and lacked the cutting edge as the ball was moved forward.

Boss Lennon was beginning to look agitated and frustrated on the touchline as his players lacked imagination and pace in their movements in the middle of the pitch.

Ref Madden was quick to flash a yellow card at Bitton who tackled Callum Hendry after the Saints forward had blatantly pushed him before taking possession – an infringement overlooked by the match official.

At 0-0 at the interval, there was a lot of work ahead of the Hoops manager as he attempted to galvanise a team that looked short on invention, intensity and overall spark on what must be admitted was a very heavy pitch. 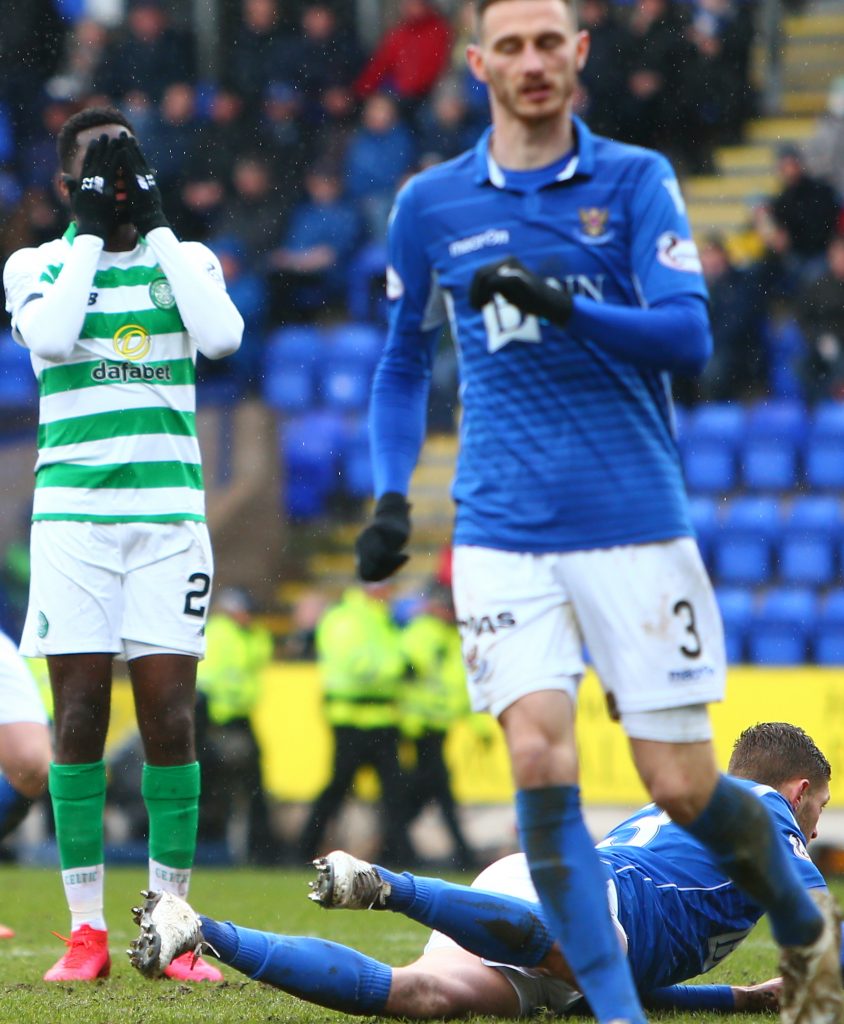 OH, NO…Odsonne Edouard can’t bear to look after thumping a shot off target.

Two minutes after the interval, Forrest and Christie combined to carve open a chance for the Scotland winger, but he slashed the ball wide of the far post.

Moments later, Edouard blazed wildly off target from 12 yards when it looked as though he was about to add his 27th goal of the campaign.

Hendry, who was putting himself around, was next to be booked with a heavy challenge on Ajer that looked nasty.

In the 54th minute, Clark looked lively to get down to his right to scoop away a low angled drive from the hard-working Forrest with Griffiths just too late to capitalise on the loose ball.

A couple of moments later. Ajer sent Griffiths clear, but he lifted the ball well over the bar when he should have hit the target.

Taylor took far too long in taking a throw-in and, after a couple of warnings from the referee, the shy was eventually awarded to the Saints. Quite correctly, Lennon was far from happy with his player.

In the 64th minute, Lennon changed the shape of the team as he took off Griffiths and put on Tom Rogic to move Christie further forward to support Edouard.

Celtic surged forward with Edouard and Rogic combined to set up Christie who looked as though he was about to break the barrier, but he blasted his 10-yard shot at the advancing Clark who reacted with lightning reflexes to touch the ball away for another corner-kick.

Within moments, Edouard struck the near post with a deft flick from a Forrest cross and Jullien saw a shot deflected wide from four yards as he tried to force in the rebound. The Hoops were edging closeer to the breakthrough. 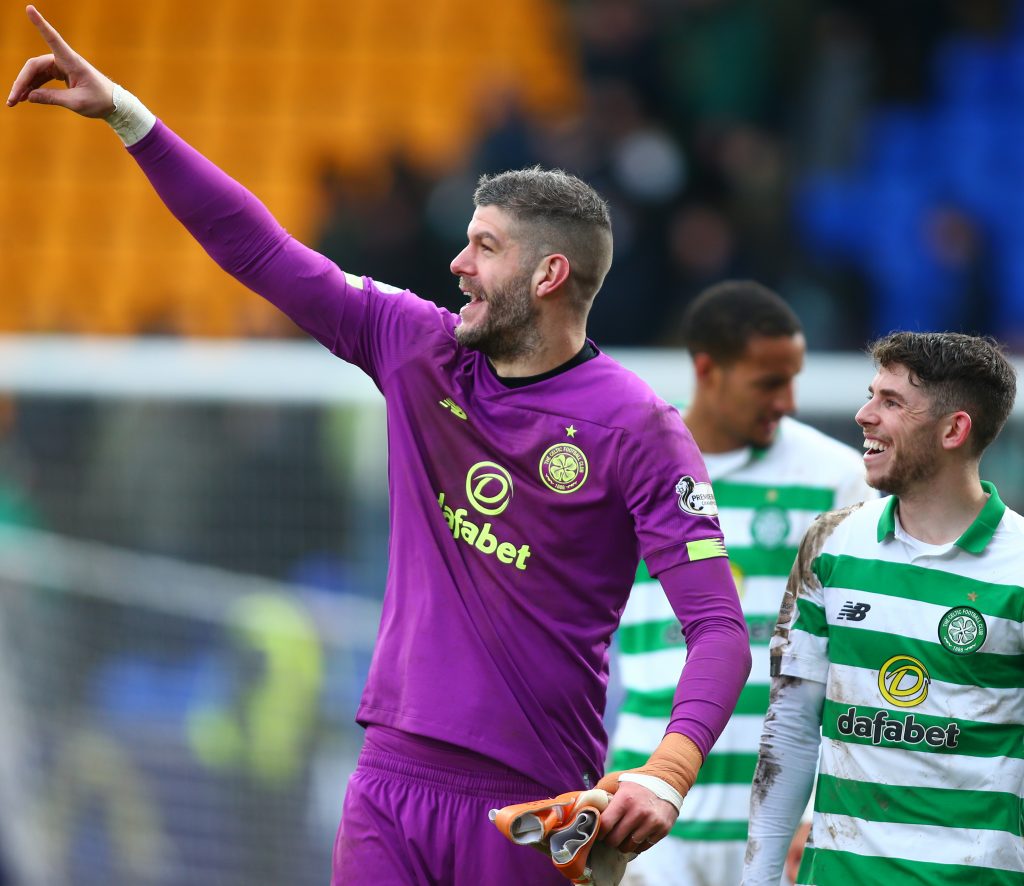 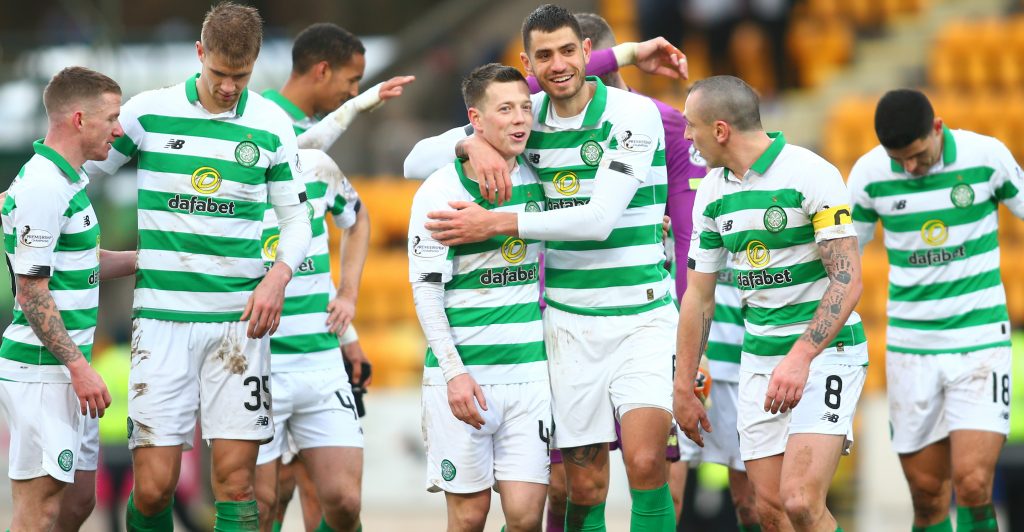 The holders were piling forward as the Perth outfit valiantly defended in numbers, but still looked dangerous on the break. And that was highlighted when Forster had to race from his line to boot clear from May.

Madden awarded a free-kick on the edge of the box when May fell beside Ajer who looked baffled at the decision. The deadball effort was cleared by a frantic defence.

In the 76th minute, Jonny Hayes replaced the toiling Taylor as Lennon urged his team forward.

Three minutes later, McCart hammered into Forrest and sent the winger flying. The defender got none of the ball and a lot of his opponent, but Madden was satisfied with a yellow card although the travelling fans were screaming for red.

Celtic got the breakthrugh goal when the Saints eventually surrendered in the 81st minute. Christie sent in the resultant free-kick from McCart’s foul on Forrest. Jullien went for it at the near post and the ball flew past the stranded Clark into the far corner. Did the central defender get a touch? At that moment, it wasn’t clear in the pandemonium in a packed penalty area, but there was little doubting the quality of the deadball effort from Christie.

Certainly, the midfielder celebrated as though he knew it was his 19th goal of the season.

Edouard, who didn’t enjoy his best outing for the Hoops, trudged off in the 87th minute with powerhouse Vakoun Issouf Bayo taking his place.

Gordon was yellow-carded for a foul on Jullien and Forster was also booked for his reaction to the challenge.

In the end, the applause went to both sets of players who were muddy marvels. To Celtic, though, went the spoils of victory to keep their amazing record intact.

Bring on the Dons!