A WINNER against Sevco, a sinner against Saints – what a transformation for Olivier Ntcham.

The French midfielder, fresh from his dramatic goal against Steven Gerrard’s team in his last outing, saw red as Celtic had to settle for a frustrating stalemate in Paisley this evening.

Ntcham could have no complaints following a moment of sheer stupidity that provoked the inevitable reaction from referee Andrew Dallas.

He had already been booked for a foul on Ryan Edwards, who had been similarly treated in only two minutes after clattering Kieran Tierney.

And then Ntcham took a rush of blood to the head that saw him make a needless and rash challenge on Paul McGinn on the touchline. It wasn’t his best decision even if he barely made contact and Dallas flashed red. 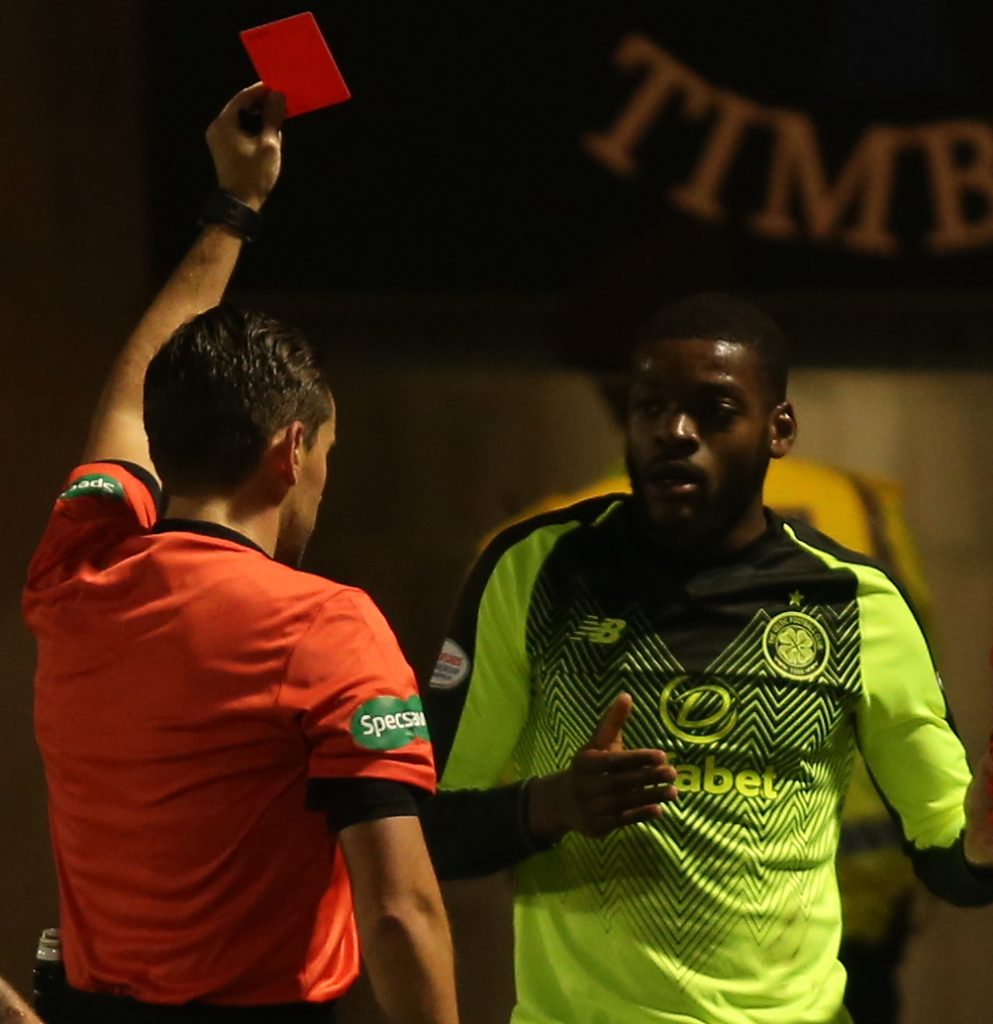 He left the field in the 37th minute leaving his team-mates with only four minutes short of an hour to try to pick up three points.

Celtic had struggled to pick up the pace of a contest against a Paisley outfit obviously motivated by the arrival in a new manager in Oran Kearney who replaced Alan Stubbs at the weekend.

Strangely, though, it was the visitors who came the closest to scoring following a Callum McGregor right-wing corner-kick in the 35th minute.

Kristoffer Ajer rose at the back post to nod the ball back into the danger zone and Dedryck Boyata met it squarely to power an attempt wide of the helpless Craig Samson.

It looked a goal all the way until Ryan Flynn materialised on the line to head it to safety.

The Saints had been first to show in the fifth minute when Cammy Smith blitzed in a 25-yard free-kick that forced Craig Gordon into a flying save to his right. 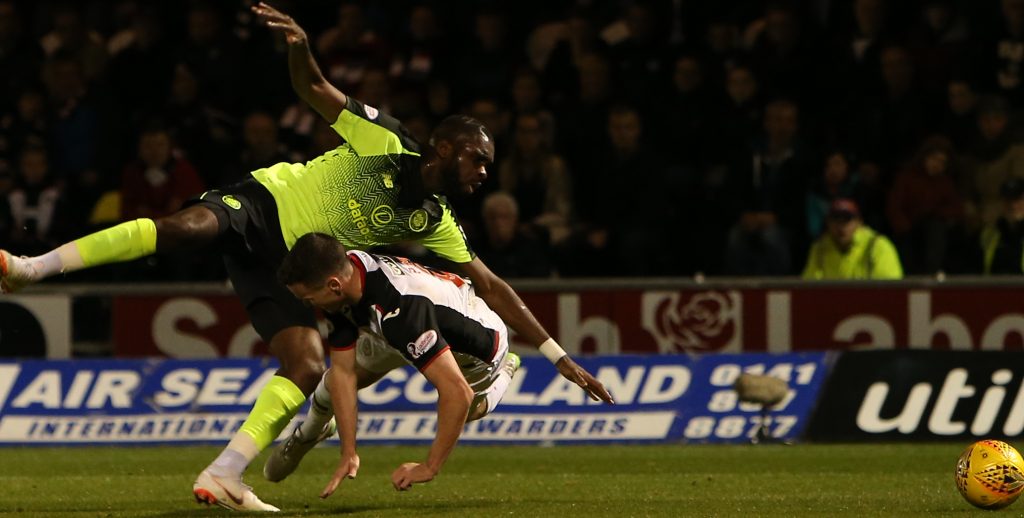 NO WAY THROUGH…Odsonne Edouard is blocked by a Saints defender as he tries to break the deadlock.

Celtic’s response was a burst forward from the ever-busy James Forrest, but he dragged his parting shot yards past the far upright while Odsonne Edouard screamed for a pass.

In the 14th minute, Lee Hodson drove a cross from the left and Flynn nodded over the bar from only six yards.

Gordon then had to push the ball for a corner as Smith sent in a snap shot from a wicked angle.

Celtic were toiling to get their passing game going in the middle of the park where Ntcham, even before his ordering-off, McGregor and Tom Rogic weren’t sparking although, to be fair, the Aussie was putting himself about.

On the plus side, Filip Benkovic, the on-loan Croatian defender, looked a class act as he brought the ball forward and his switch of play was excellent, too. However, Leicester City’s £13million man was sacrificed in the second-half in place of Leigh Griffiths as Brendan Rodgers looked for victory.

The Hoops dominated after the turnaround and had their chances. Forrest set up Griffiths, but he slashed at the cross with his right foot and his finishing effort probably ended up closer to Johnstone town centre than Samson’s net.

McGregor, who was always on the periphery on this occasion, should have done so much better, too, in the 85th minute.

After an excellent first touch, things opened up as he burst into the box, but he tried to place the ball with his left foot and his powderpuff effort was gratefully received by Samson. He should have ripped a hole in the net.

Boyata also had an opportunity smack in front of goal when he followed up his own header from a corner-kick, but his elevation was wayward and his attempt flew harmlessly off target. 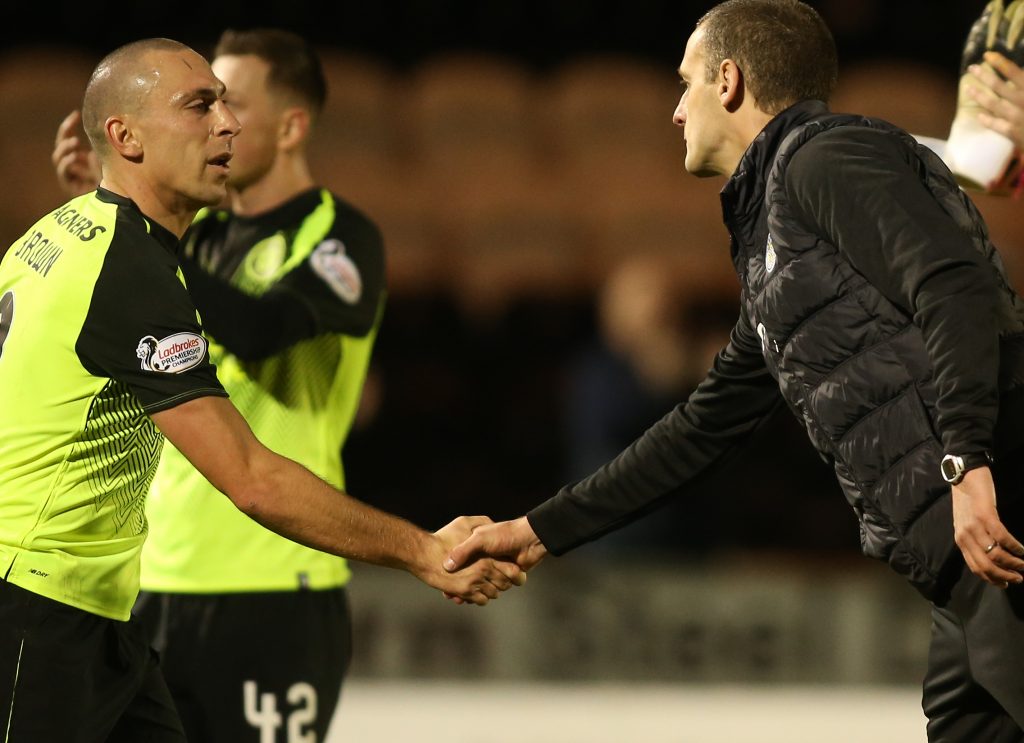 Referee Dallas made some confusing decisions in the second-half that appeared to bewilder Brendan Rodgers and his backroom staff on the touchline.

The match official, amazingly, booked Rogic when he tried to retrieve the ball from the arms of Danny Millen who had fallen over. The Saints player then threw the ball away, but escaped any retribution from Dallas.

Scott Brown, who was Celtic’s Man of the Match with a flawless performance, somehow found himself in the book, too, when it looked as though Mullen had bumped into him. The Hoops skipper couldn’t prevent a a wry smile as the yellow card came out.

Ryan Christie was sent on for Edouard late in the game, but at that stage the points were already slipping away.

Griffiths first-timed the ball into the net with the last kick, but was a yard offside. It was the story of a painful night in Paisley for the champions.