CELTIC blew two points in Paisley in a scoreless stalemate that could prove so crucial in May when the first prize is handed out.

Ange Postecoglou’s men huffed and puffed throughout an uninspiring and frustrating 90 minutes-plus in Paisley this evening when they failed to dazzle in the drizzle.

There was no inspirational figure such as Kyogo Furuhashi as the visitors failed to capitalise on overwhelming possession on a night when very little went right as they finished a dour contest six points adrift at the top of the Premiership.

Chances were made and chances were squandered in reckless fashion with a team crying out for firepower when their Japanese talisman is not around to provide that cutting edge. 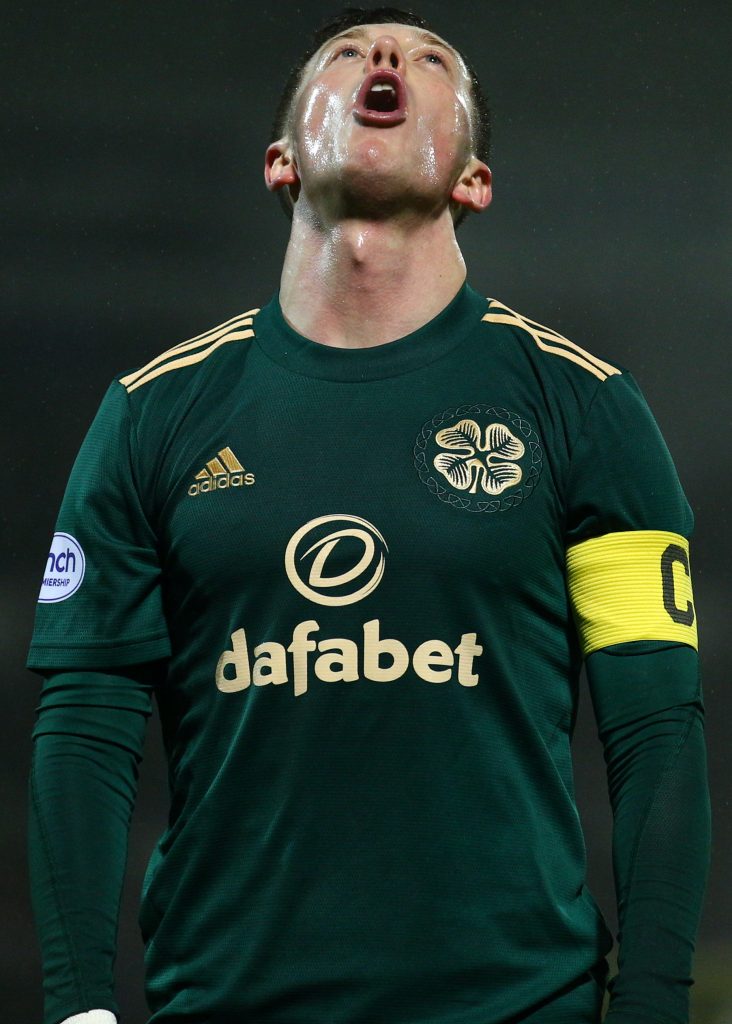 Patience was the key as Postecoglou’s side failed to spark against a workmanline and stubborn Saints side.

On the occasions the Hoops, once again wearing their all-green strip, managed to break through, keeper Dean Lyness dealt well the threats.

The stand-in netminder pulled off a superb high-flying save to his right as he turned away a 12th-minute free-kick from Nir Bitton that was arrowing into the top corner.

He then made a competent save from Anthony Ralston in the 20th minute and moments later Liel Abada was off target with a wayward effort. 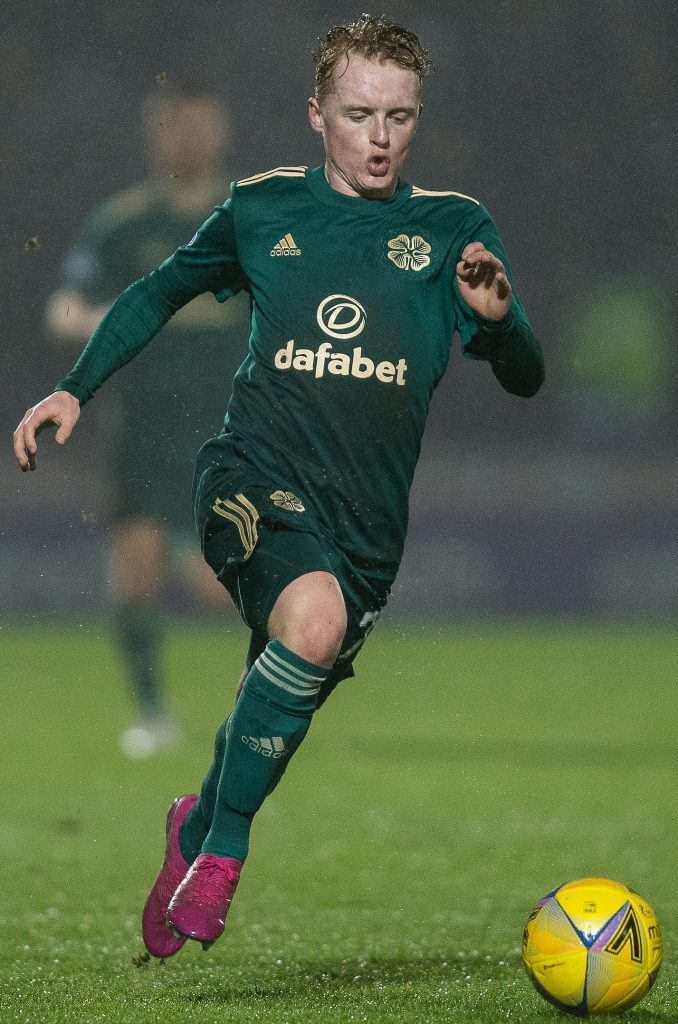 ON THE RUN…new Bhoy Owen Moffat is on the ball.

As Celtic attempted to get the game in a stranglehold, Callum McGregor was denied by Lyness as the keeper got down smartly to his left and Tom Rogic was next to try to get the breakthrough goal, but his attempt was blocked.

In quick succession, Mikey Johnston and debutant Owen Moffat saw efforts repelled by desperate defenders who were willing to throw themselves in front of shots on goal.

There was a flurry of activity in front of Scott Bain as the home side forced a couple of corner-kicks with Joe Shaugnessy and Charles Dunne reminded the Parkhead side they were still in the contest.

Nearing the interval, the pacy Moffat made a lung-bursting 50-yard run, but, unfortunately, his right-wing cross was too heavy for Johnston and Rogic and the chance was gone.

Three minutes after the turnaround, Johnston fired in a snap volley from 10 yards, but it was straight at Lyness who held on to deny the winger.

Next up, Moffat zipped one high and wide after being set up by the quick-thinking Abada.

The little Israeli international was playing through the middle with the 19-year-old new Bhoy wide on the right, but it was taking a while for the new-look side to gel on a wet and miserable winter’s evening in Paisley.

In the 61st minute, Postecoglou made his first change when he replaced Moffat with Josip Juranovic and moments later Johnston skied the ball widly over the bar from a good position as the relentless search for the breakthrough goal went on.

Johnston then set up Callum McGregor 25 yards out, but the skipper’s effort was taken comfortably by Lyness as he held the ball to his right. 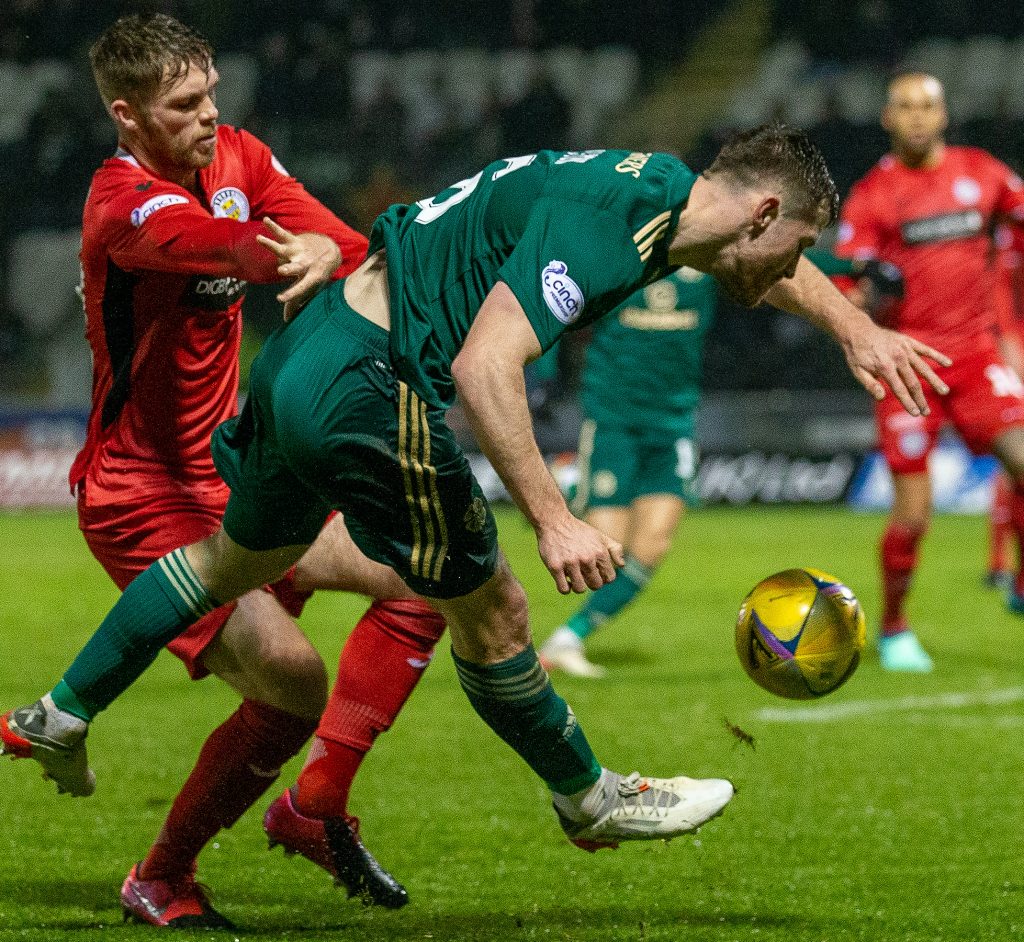 In the 68th minute, Scott Bain was brought into action as the Saints staged a speedy break after a Juranovic corner-kick from the right had gone astray. They sliced through the heart of the Hoops rearguard and Curtis Main was presented with a chance 16 yards out, but his low drive was well held by the netminder as he got down swiftly to his right.

Three minutes later, Rogic set up McGregor on the left, but his ball was too fierce for Abada to turn into the gaping net and once again a chance was squandered.

Juranovic was within a yard of the opener when he swirled a free-kick from 25 yards beyond the right hand of the diving Lyness, but, alas, the ball carried just wide of the right-hand upright and the home side breathed another sigh of relief.

Liam Shaw then came on for Bitton in the 81st minute as Postecoglou sought the key to open up a packed Saints back lot.

In the 84th minute, Ralston fired over an inviting cross from the right, but Abada, smack in front of goal, failed to make contact and the home side escaped again. It was becoming more than a little monotonous.

Abada’s touch was off moments later when he was picked out by Juranovic and once more a chance was lost.

Ralston then had a looping header snatched from under the bar in the 87th minute as Celtic’s attacks became a bit more frantic.

Greg Taylor was then thrown on for Scales in a third second-half change as Celtic chased the all-important goal.

It wasn’t to be on an evening where Celtic failed to rise above the mediocre. They went into the game in the knowledge of how their opponents would set up and the visitors still lacked the ingenuity and finishing skills to capitalise.

Postecoglou knows there are questions to be answered after this below-par performance.