Any chance of Jim Goodwin’s men repeating the feat of their win in Glasgow 11 days ago was obliterated as the champions turned on the firepower and left them devastated and well beaten.

The Hoops were already leading with a first-half strike from Tom Rogic when they went into overdrive when Odsonne Edouard battered in a penalty-kick in the 80th minute and Ryan Christie and David Turnbull added two more in quickfire fashion to illuminate a grey evening.

The only blemish on an otherwise flawless night for the visitors was the sight of Stephen Welsh being stretchered off in the 68th minute when a late challenge from Jonathan Obika left him writhing in pain after being caught on the instep. He was forced to go off with Shane Duffy taking his place.

At the same time, Neil Lennon took the opportunity to bring on Ryan Christie for the ineffective Albian Ajeti who worked hard with little reward.

Celtic dominated the opening half while displaying a lot of energy and endeavour against a Saints team willing to snap into challenges all over the pitch. 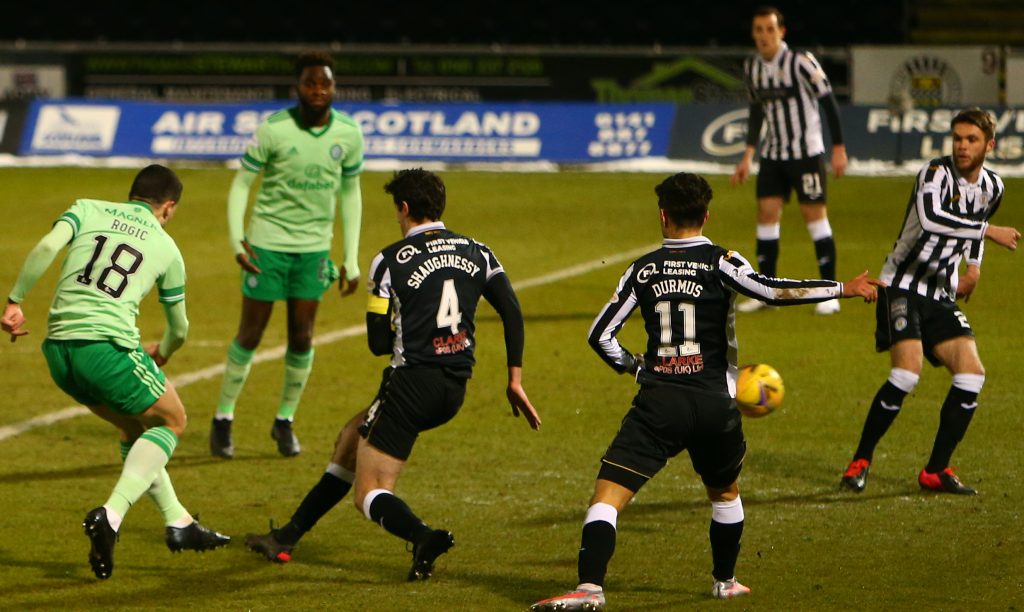 The breakthrough goal came from Rogic and it was an effort to roll back the years. Jonjoe Kenny took a throw to the Aussie close to the corner flag on the right. The playmaker shuttled it back to the on-loan right-back who wasted no time in returning it to Rogic who had quickly moved into a better position.

He drifted across the penalty area taking the ball to his left foot before drilling in an excellent drive low beyond the sprawling Jak Alnwick for a superb goal.

When you see the flamboyant forward produce a little moment of magic like that you have to wonder why that was only his second goal of the season.

But it was a goal the Hoops deserved for their play in the first 45 minutes-plus with two minutes being added on for an injury to the home side’s talented Irish youngster Jamie McGrath who injured his left shoulder when he fouled Welsh in the 14th minute. Kyle McAllister came on in his place.

Four minutes afterwards there was a blistering exchange between Edouard and Ajeti and the Swiss international was just about to pull the trigger for what almost certainly would have been No.2 when a Saints defender threw his foot at the ball to nudge it to safety.

In the 33rd minutes, Kristoffer Ajer went on an incredible lung-bursting 70-yard run down the left that only came to a halt when he lost control in the home penalty box and keeper Alnwick dived on the loose ball. 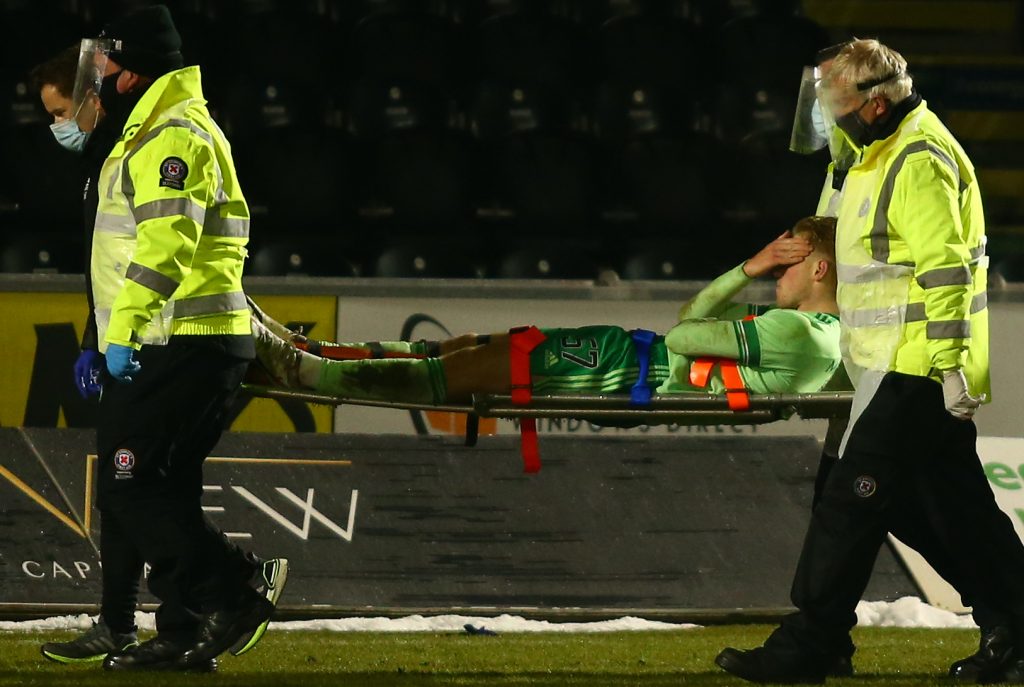 STRETCHERED OFF…Stephen Welsh can’t bear to look as his game is over in the 68th minute.

Scott Brown was dominant as he covered and cajoled and generally pointed his team-mates in the direction of the opposition’s goal. He was perpetual motion throughout the confrontation.

In the 42nd minute, Rogic set up Turnbull, but the young midfielder snatched at the opportunity and his right-foot shot from inside the box swept waywardly past the left upright.

Scott Bain had been a virtual onlooker for the opening period, but the Saints did give him a slight scare before the interval when Dylan Connolly fired one just past his left-hand post from close range. Kenny deserved credit for a late lunge to put the attacker off at the crucial moment of impact.

Eight minutes after the turnaround, the Hoops continued to pile forward and Rogic picked out Callum McGregor at the edge of the box, but his shot was woeful, weak and well off target.

In the 57th minute, Alnwick had a superb save at his near post from Edouard who really should have scored. 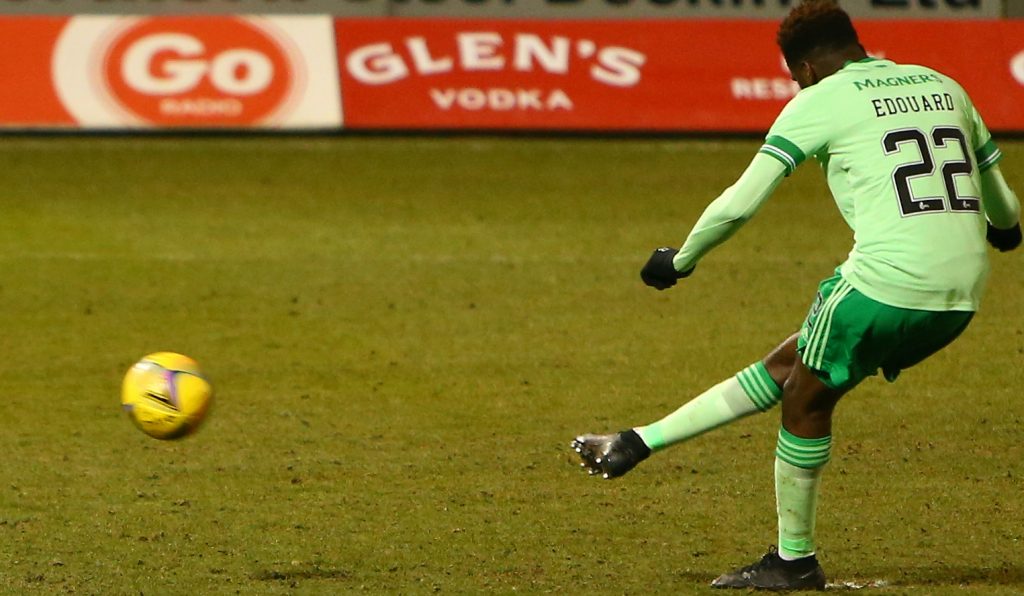 NUMBER THREE…Ryan Christie whips an angled drive into the net with Patryk Klimala getting a good view. 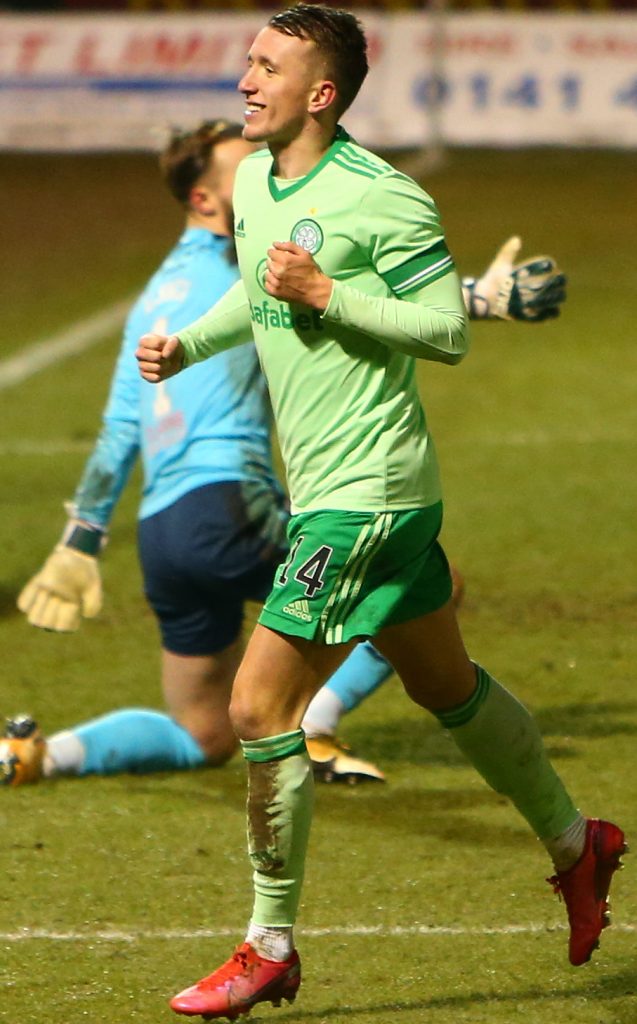 NUMBER FOUR…David Turnbull is all smiles after tucking the ball away.

A second goal had to come and it arrived in the 80th minute after Greg Taylor had been tripped in the box by Ryan Flyn. Referee Don Robertson unhesitatingly pointed to the spot and Edouard fairly hammered the award beyond the helpless Alnwick.

It was the Frenchman’s last action as he was withdrawn for Patryk Klimala.

Two minutes later the third goal arrived when Brown got the move in motion with a tackle and pass forward to Rogic who had an interchange of passing with Christie before the Scotland international finished with a stylish shot across Alnwick for his first league goal since October, a wait of 13 games.

The fourth goal duly arrived 60 seconds later when Christie set up one for Turnbull and he didn’t hesitate as he slid the ball in at the post.

Leigh Griffiths and Mohamed Elyounoussi also got late run-outs in place of Rogic and Turnbull.

This was more like the Celtic team we have watched in recent years.