Celtic Quick News on News Now
You are at:Home»Match Report»ST MIRREN 1 CELTIC 2: LATE SCARE – BUT IT’S ELEVEN FROM HEAVEN FOR THE CHAMPS
By CQN Magazine on 26th December 2019 Match Report

CELTIC racked up their ELEVENTH successive Premiership triumph at Paisley this afternoon – but were given a late scare on their way to the three points.

Callum McGregor and James Forrest struck in the first-half to have the Hoops in cruise control.

However, a deflected free-kick from Cameron MacPherson wrong-footed Fraser Forster near the end to make the scoreline a lot tighter than it should have been,

Neil Lennon may be concerned that his side dominated for the majority of the 90 minutes, but could not convert their superiority into the currency of goals.

They have scored two goals in each of their past four league outings which hardly emphasises their domination of Hibs, Hearts, Aberdeen or the Saints. 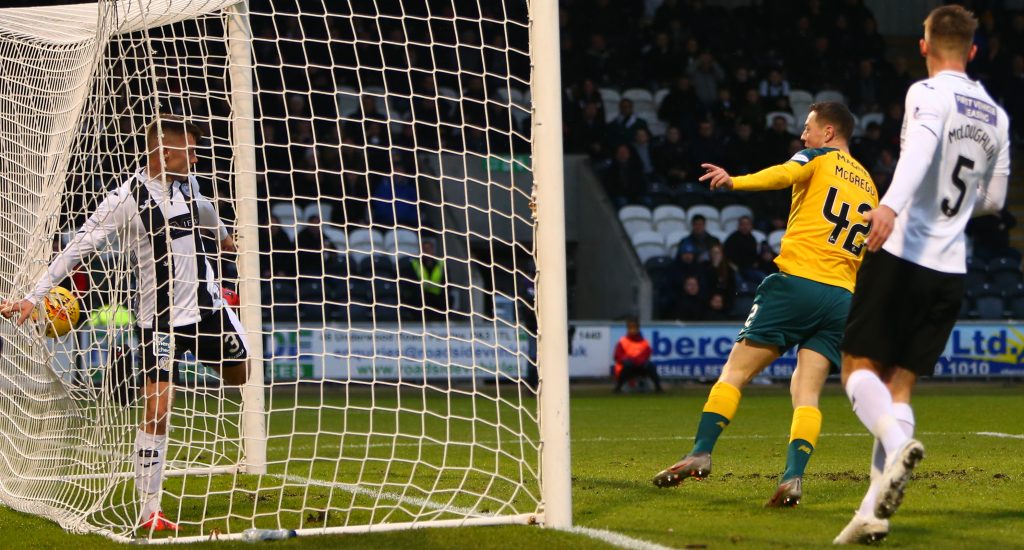 NUMBER ONE…Callum McGregor knocks in the breakthrough goal against the Saints.

Their cause wasn’t helped by two dodgy decision that robbed Odsonne Edouard of two goals after the turnaround.

On this occasion, though, two goals in 10 first-half minutes sent the champions on their way to three points.

After dominating possession and rarely threatening a breakthrough strike, the Hoops took the lead in the 22nd minute with a sweet-flowing move that brought some quick reactions from McGregor.

Ryan Christie got the move going with an excellent left-foot pass to Edouard racing clear on the left wing. The Frenchman was well onside as the Paisley defence and fans claimed otherwise, but the Frenchman ignored their appeals – as did referee Willie Collum – to gallop towards the danger zone.

He knocked a pass to McGregor who clipped an effort over the advancing Saints keeper Vaclav Hldaky. The ball struck the right-hand post, but the Scotland international was alert to follow up and thump the rebound into the net to open the scoring.

NUMBER TWO…James Forrest stretches as he fires in the second goal with the Paisley defence in disarray. 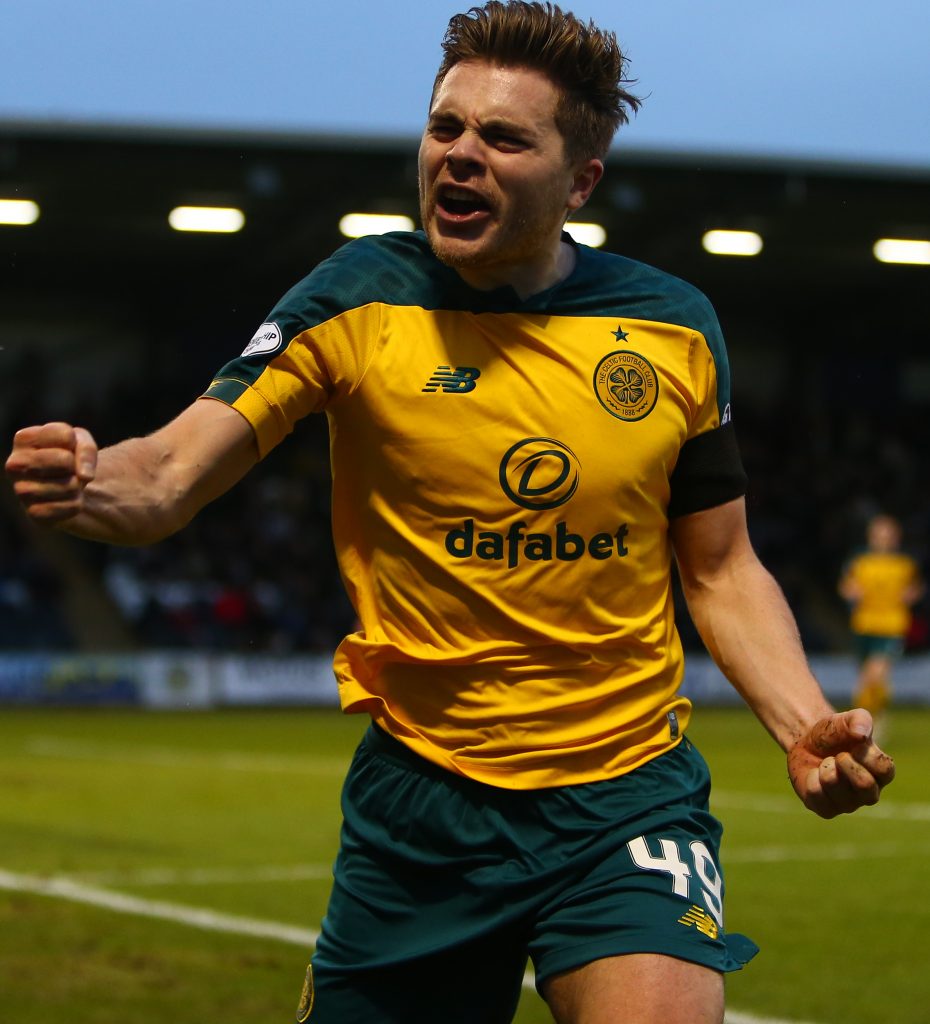 Ten minutes later, Forrest doubled the advantage when he started and finished a lighting move. Again Edouard was involved as he moved onto a pass from the winger.

He carried it forward before knocking a pass inside and Forrest took the ball on the run, cleverly made an angle for himself and then drilled the ball into the inviting net with Hladky helpless.

The champions were well worth their two-foal half-time advantage after controlling most of the opening 45 minutes, but, strangely, the first shot on target came from the home side when Ilkay Durmus flashed in a first-time drive following a right-wing cross, but Fraser Forster was well placed to grab the ball low at his left-hand post.

Kristoffer Ajer must have been wondering over his half-time cuppa how he had failed to add to his two goals in this campaign. Ryan Christie picked him out three times with superb corner-kicks from either wing, but the towering Norwegian defender missed on each occasion.

Jeremie Frimpong, as ever, was a willing worked on the right flank and the Dutchman set up two good opportunities before the interval that went abegging.

In the 49th minute, Edouard got clear on a pass from Scott Brown to lob a measured effort into the roof of the net. It looked good, but the linesman flagged for offside and TV images showed it was an extremely tight decision.

Later in the game, Edouard lobbed an another effort over the flailing arms of the keeper and once again the flag-happy assistant reckoned it was offside. Once more, TV pictures showed he may have been just a little too hasty in his judgement. 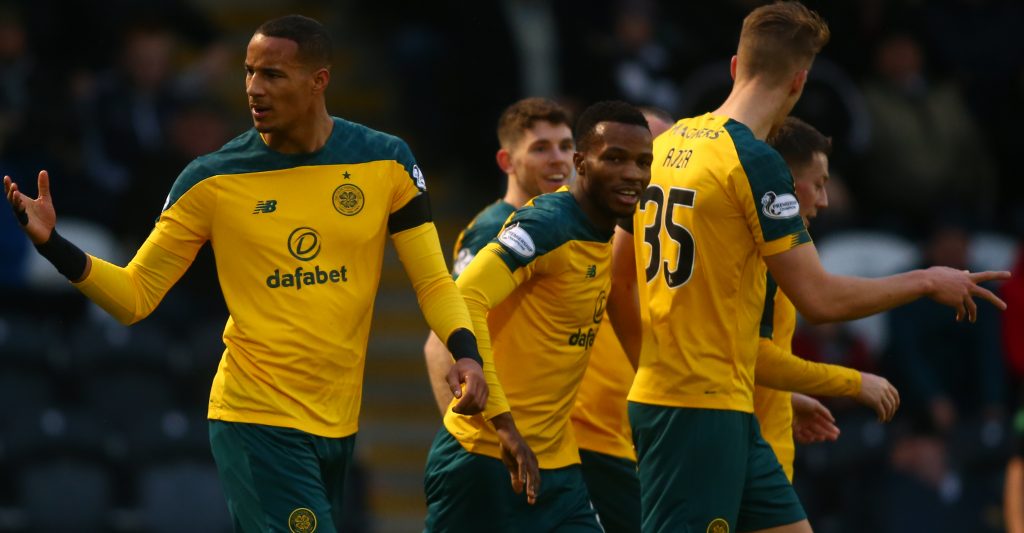 In the 51st minute, Hldaky made a good diving save from Forrest and did likewise after Frimpong had dazzled to get into a shooting position on his left foot. And the Czech keeper followed that up with an excellent sprawling stop from an Olivier Ntcham.

Forster had been mainly a spectator at the other end, but he was called into play when Christopher Jullien switched off and allowed Jon Obika a clear sight of goal, but the keeper made an excellent save to his left.

In the 69th minute, Neil Lennon freshened things up when he sent on Mikey Johnston for Forrest and near the end Leigh Griffiths was introduced for Edouard..

But there was a late fright when Jullien, who had just been booked for giving away the free-kick, deflected the resultant award from MacPherspn beyond the helpless Forster.

Now it’s all eyes on Parkhead on Sunday as the champions bring  down the curtain on a memorable decade when Steven Gerrard’s Ibrox outfit, who haven’t scored in their previous two games against the Hoops this season, are the visitors