Celtic Quick News on News Now
You are at:Home»Latest News»‘STAND UP AND BE COUNTED,’ CALMAC WAR CRY
By CQN Magazine on 18th March 2022 Latest News

CALLUM McGREGOR insists there is no hiding place for anyone at Celtic between now and the end of the season.

It’s time for everyone to stand up and be counted with the finishing line in sight and an extraordinary domestic silverware clean sweep in view.

The Premier Sports League Cup was claimed in December with a 2-1 triumph over Hibs, the Hoops are three points ahead at the top of the league with eight games to play and have a Scottish Cup semi-final against Giovanni van Bronckhorst’s side to look forward to on Sunday April 17.

Before the last-four confrontation, Ange Postecoglou will take his players to Ibrox a fortnight on Sunday for the third derby of the campaign after thrashing the Govan club 3-0 in the east end of Glasgow at the start of February. 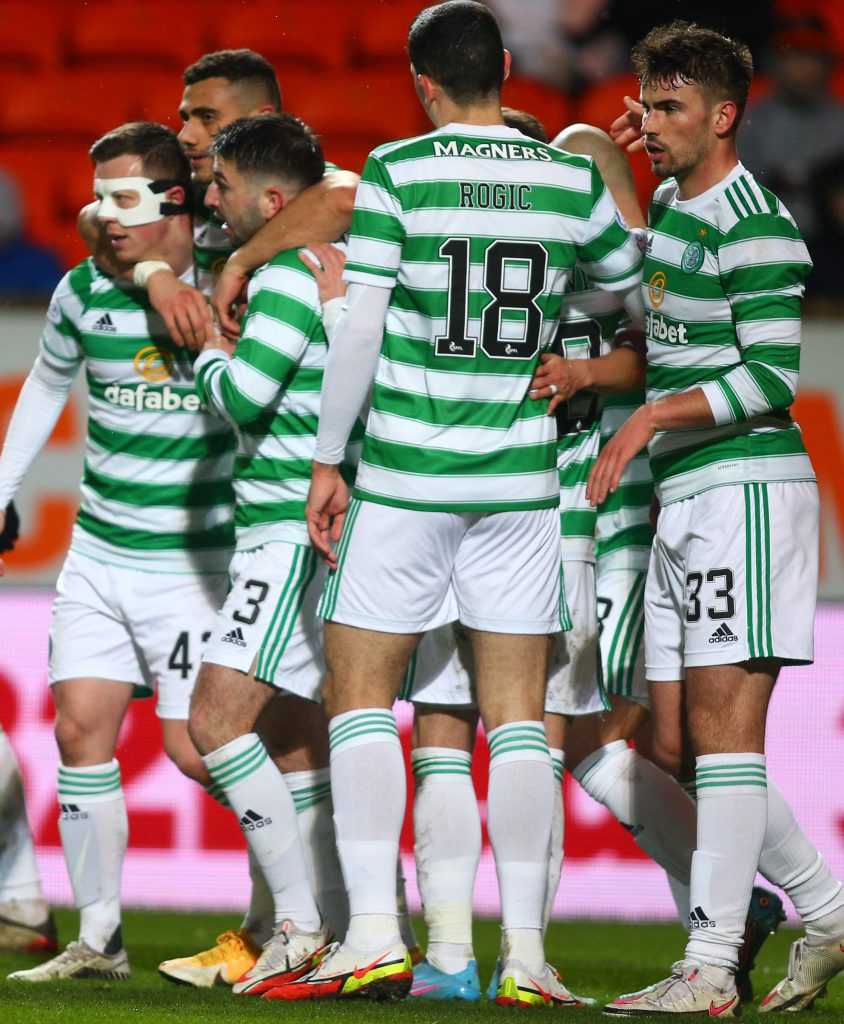 PRIZE GUYS…Callum McGregor and Greg Taylor celebrate Giorgis Giakoumakis’ first goal in the 3-0 win over Dundee United at Tannadice. Tom Rogic and Matt O’Riley are about to join in the celebrations.

McGregor, who took over as captain from long-serving onfield leader Scott Brown in the summer, is pursuing his seventh championship success and is adamant he is up for the challenges that are laying in wait.

The club and country anchorman said: “This is the stage of the season, maybe 10 games to go, that you love as a player.

“We’ve got big international games coming up, then we’re back in and full focus, eight or nine weeks of: ‘Here we go, this is the good stuff’.

“This is what you play football for, the big games where you need to stand up and be counted. That’s the most exciting period of the season. When big games come around, semi finals, Finals and, hopefully, big league games.

“If you want to play at Celtic then you have to embrace that pressure of having 10 massive games and having to win them all to have a successful season.”

A satisfied Postecoglou watched his side overcome a spirited and stubborn Dundee United 3-0 at Tannadice on Monday night to rack up their thirtieth unbeaten game on the domestic front to set up the semi-final shoot-out at the national stadium next month. 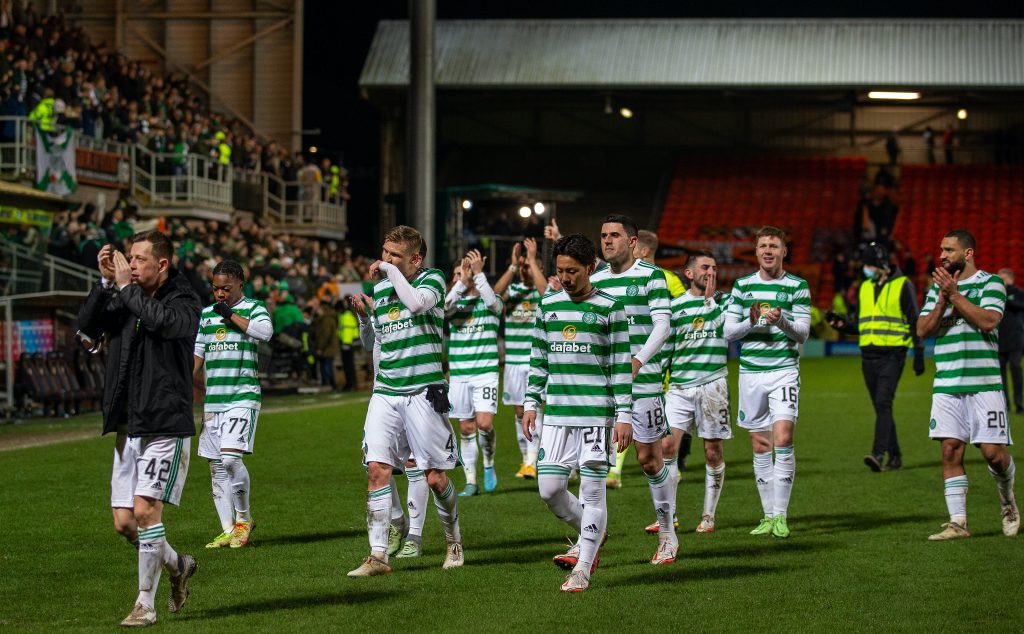 FANFARE…Callum McGregor leads the Celtic procession as the players applaud the fans for their support at Tannadice on Monday evening.

Twenty-eight-year-old McGregor, speaking to the Daily Record, continued: “We have done great up to now, but this is where the period comes in that you have to stand up and be counted.

“As a group, whenever we have had a challenge like that, then more often than not we have risen to the challenge.

“Just looking at the boys, you can see in training every day they are ready for it.

“They are enjoying it and are going to embrace it. Here’s hoping we can do that.”

The Hoops are now preparing for the visit of Malky Mackay’s Ross County tomorrow afternoon and talismanic striker Kyogo Furuhashi, scorer of 16 goals before the tun of the year, will almost certainly be missing from the squad yet again.

The Japan international has yet to kick a ball in 2022 after limping off in the 3-1 win over St Johnstone in Perth on Boxing Day. 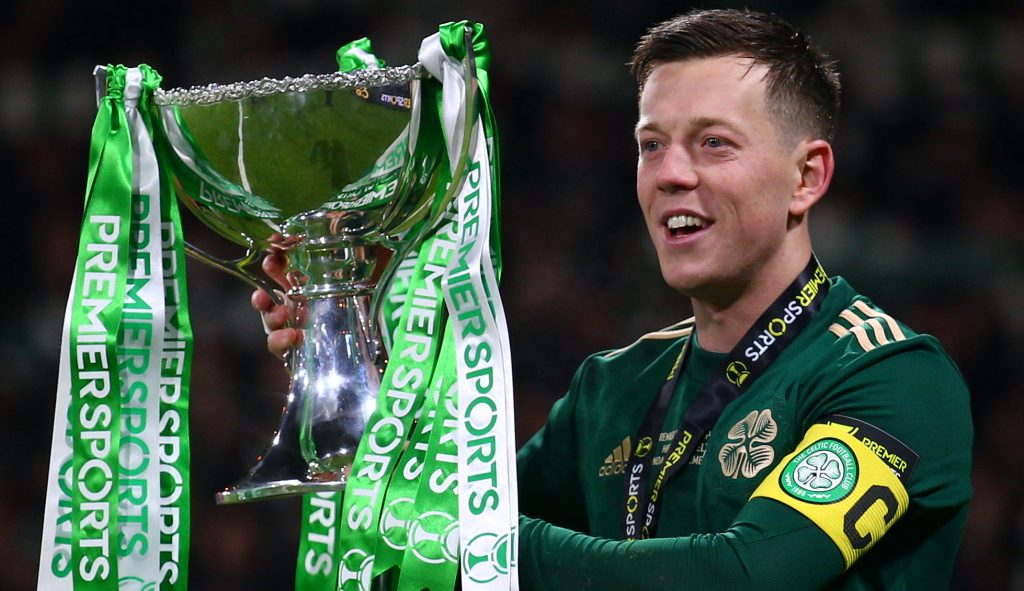 SILVER SMILES…Callum McGregor with the Premier Sports League Cup at Hampden in December.

Tomorrow will be the sixteenth consecutive game the team will be without the services of the fans’ favourite although there are hopes the £4.6million summer arrival from Vissel Kobe will have a role to play in the vital campaign crescendo.

McGregor added: “It would be good timing if we could get Kyogo and David Turnbull as fit as possible for the run-in. We NEED everyone fit. We’ll generally only have one game a week, so that makes every week of training really important.

“The more options you have, the more standards in training go up and more more selection headaches the manager has. Hopefully, that’ll stand us in good stead.”

* Callum McGregor was speaking at the launch of the Billy Against Dementia Golf Day and Dinner to be held on Friday, June 3, at Cameron House Hotel. The event will be hosted by Sky Sports’ Hayley McQueen with funds raised going to providing respite care for former footballers suffering from dementia. The event is being supported by the SFA, SPFL and PFA Scotland and tickets can be booked on: www.eventbright.co.uk.