Celtic Quick News on News Now
You are at:Home»Latest News»STARFELT’S CASE FOR THE DEFENCE
By CQN Magazine on 18th October 2021 Latest News

IT went almost unnoticed, but Celtic enjoyed their first clean sheet on their travels this season in the 2-0 win over Motherwell at Fir Park at the weekend.

Joe Hart was rarely called into action as Carl Starfelt and Cameron Carter-Vickers played their part in central defence to protect their keeper to make sure he wasn’t required to pick the ball from the back of his net during their ninth away encounter.

The rearguard has come in for some criticism with Ange Postecoglou’s system taking a while to gel, but signs are now positive after the display against a Well side that started the game above the visitors in the Premiership.

RISE AND SHINE…Carl Starfelt heads clear in the 2-0 win at Motherwell.

Once the smoke of battle had cleared – and goals in each half from Filipe Jota and David Turnbull had settled the issue – the Parkhead men found themselves only four points off the Premiership pace.

Swedish defender Starfelt, a £4.2million summer recruit from Russian cracks Rubin Kazan, is convinced that the line-up are starting to find a blend and understanding as the campaign develops and new Bhoys settle in to the Greek-Australian’s formation.

The international stopper said: “We had some injuries and some guys coming in late like myself, but now I feel we have most of our players back and some more who are really experienced are also coming back.

“So, it’s positive and so was the last game. It’s positive at Celtic right now. I think we will continue to grow and grow.

“It is nice as a defender to get a clean sheet, of course. Also for the whole team, but the most important thing is that we win.

“We had a very solid performance and I felt we dominated most parts of the game. To win 2-0 makes us very happy as it was away from home and it is not easy to go there, so I think we did a good job. 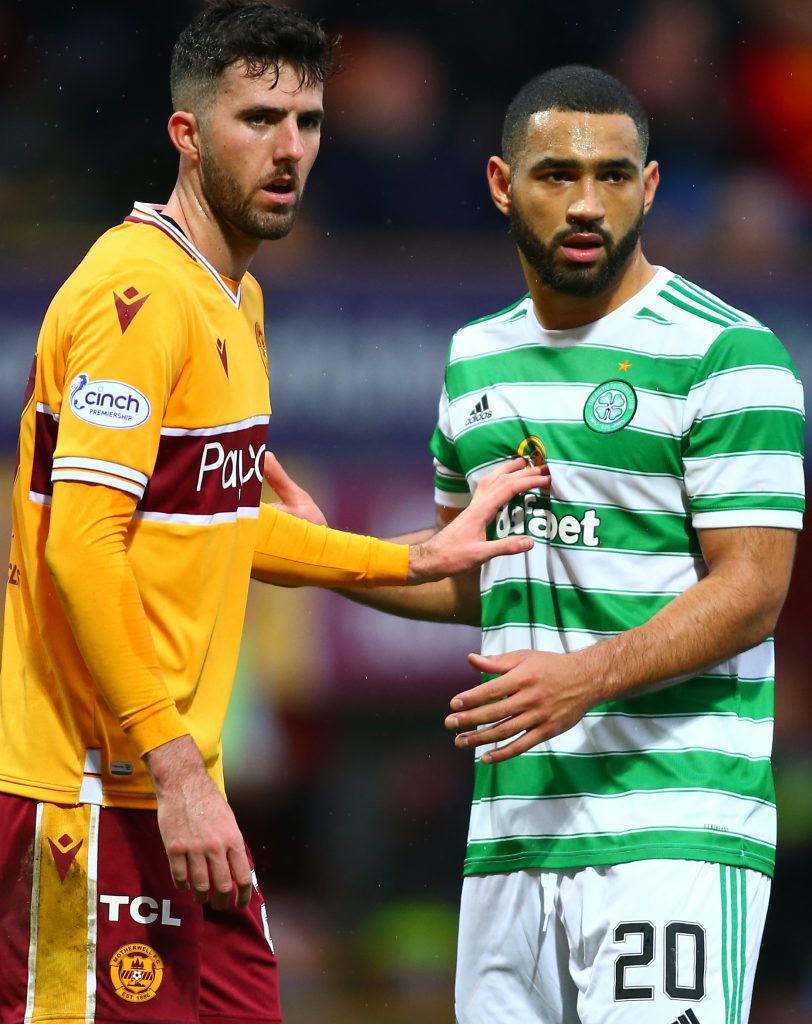 CLOSE MARKING…Cameron Carter-Vickers is held in check as he joins the attack at a set-play.

“But I feel we are getting more and more comfortable with each other and also just the way we are playing.

“I don’t think we have reached our maximum performance yet, but we are playing better and better and that is an important thing.

“We had a good performance and it started by keeping the ball well. That gives them little time to be able to attack us. It starts there.

“Then we got the ball, we had control over their strengths.

“We are happy with it, but it’s straight to another big game tomorrow, so we recharge the batteries and go again.

“We were good, but, as I said, it is just one game, so we should not think now everything is fine.” 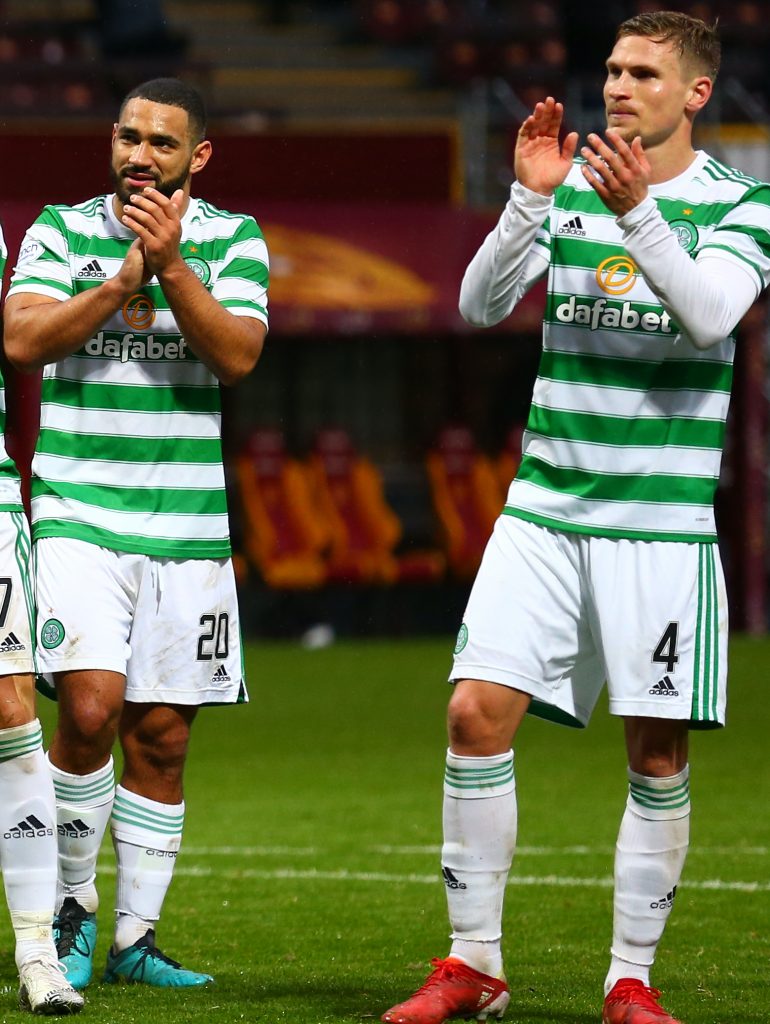 IT TAKES TWO…Cameron Carter-Vickers and Carl Starfelt applaud the Celtic fans after the win – and shut-out – at Fir Park.

Starfelt and Carter-Vickers, on loan from Spurs, dovetailed well and the Swede, speaking to the Daily Record, continued: “The more you play alongside someone, the more you begin to understand each other. But it’s not just about two players, it’s about the whole team and I think we have so many games that you have to change players.

“But it’s about having a strong core on the pitch. When you have that, you change players here and there and it will still be stable.

“I feel we are taking a step in the right direction.”

Christopher Jullien, the towering French defender who has not played this year after undergoing knee surgery following a collision with a goal post on December 30, is also edging towards a first-team return.

The £7million stopper has been training with his colleagues and Starfelt added: “I haven’t seen him play too much, but I think he’s a good player.

“He’s a great guy and I’ve trained with him in a couple of sessions. He is looking sharp and we hope to have him back soon.”