Celtic Quick News on News Now
You are at:Home»Football Matters»Statement from Celtic Supporters & the uncomfortable facts
By CQN Magazine on 28th May 2015 Football Matters

The Statement from Celtic Supporters which was published in Sunday Herald on 25th January 2015 was still in the news at the weekend as the MSM tried to link a feature by a freelance journalist on Rangers ”returning” to the top league after liquidation and relegation as being proof that such a august organization as Fifa had endorsed the same club myth.

On the excellent www.sfm.scot blog the poster itsalitany gave a fine response which we hope that he doesn’t mind us re-producing here. Here’s what itsalitany  had to say….

In response to Martin Williams’ piece in the Herald, The Rangers Football Club was formed in 1872 as an unincorporated association of individuals, each of whom had unlimited personal liability for the club’s debts and obligations.

The club consisted of the individuals who ran it. It had no separate legal personality.

The club was incorporated on 27th May 1899 as “The Rangers Football Club Limited”. Its details and the date of incorporation can be seen by entering the company number SC004276 on the webcheck section of the Companies House website.

The legal effect of a sports club incorporating as a limited company is neatly summarised on the Sportscotland website, which states:

“Converting your sports club to a Limited Company enables your club to become established as a legal entity in its own right, separate from the individual members.

Advantages – Limited Company
• Because the club is a distinct legal entity, it is easier for the club to enter into contractual arrangements e.g. to borrow money, own buildings, or stage very large events.
• The club itself, rather than the individual members, are responsible for the club’s obligations and debts (unless one of the officers has acted negligently or fraudulently, in which case the individual remains personally liable)
• And the individual members can only be held responsible for the debts and obligations of the club up to the nominal value of their guarantee.”

The key point is that, upon incorporation, a club becomes a limited company. The limited company (in Rangers’ case company SC004276) was the club. From 27th May 1899 onwards, the club and company were one and the same.

It entered administration on 14th February 2012 and compulsory liquidation on 31st October 2012. In the interim, its name was changed to R.F.C. 2012 PLC on 31st July 2012 and some of its assets were sold by its then administrators, Duff & Phelps, to Sevco Scotland Limited (Company Number SC425159), which had been incorporated on 25th May 2012 and changed its name (also on 31st July 2012) to “The Rangers Football Club Limited”.

At the time it agreed to purchase certain assets of the club, Sevco Scotland Limited (now called The Rangers Football Club Limited) was not itself a football club. It subsequently became a football club when it was granted conditional membership of the Scottish Football Association and a licence to operate as a football club under the auspices of the SFA.

The football club formed in 1899 still exists, but is no longer active as a football club. It is a corporate husk, kept alive temporarily while its liquidators seek to recover as large a portion as possible for its creditors of the money which the creditors are owed by it. It will remain in existence only until the liquidation process is complete, at which point it will be dissolved and removed from the Register of Companies. It played its final competitive football match on Sunday, 13th May 2012, twelve days before the club currently playing out of Ibrox came into existence. 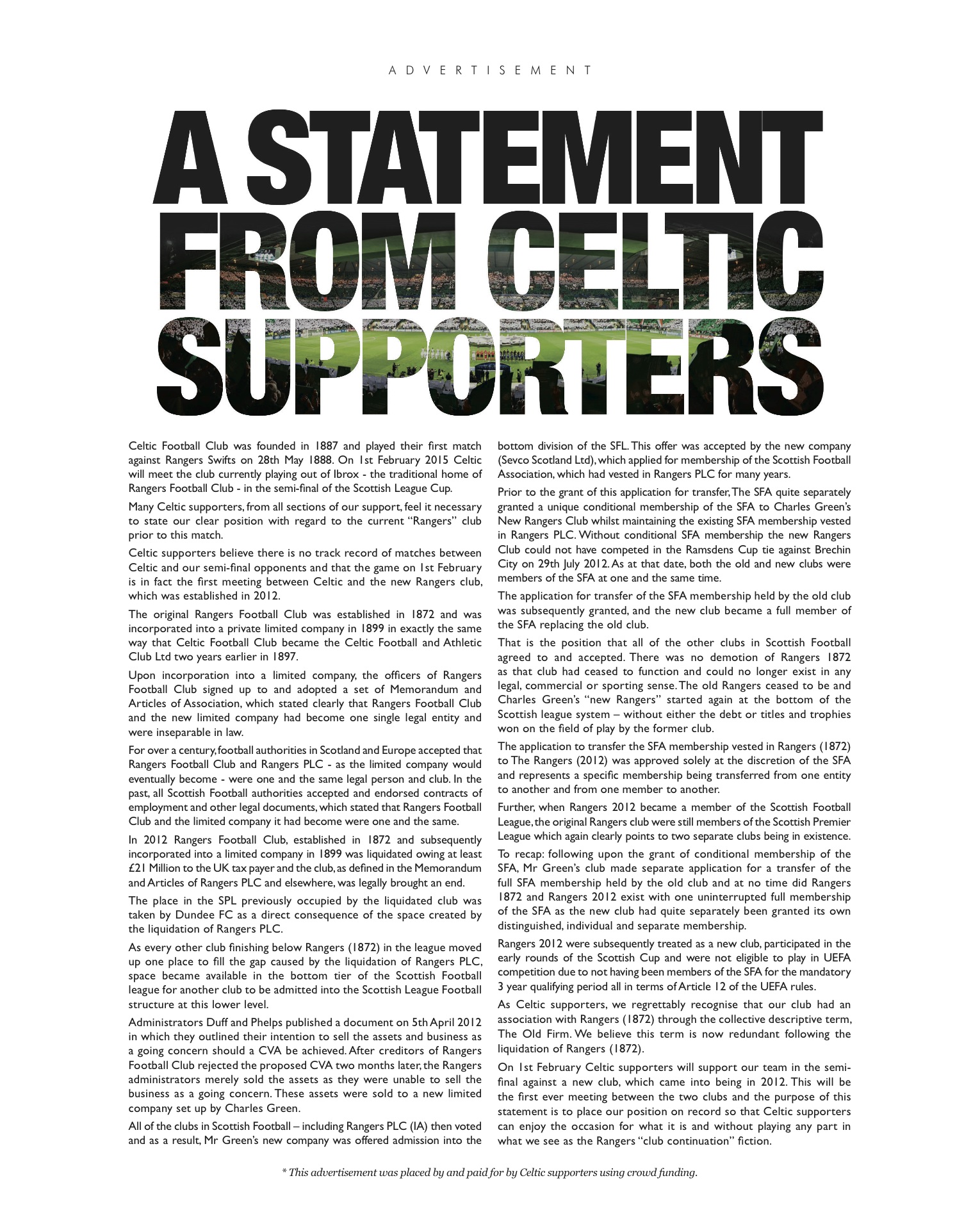