Celtic Quick News on News Now
You are at:Home»Lions & Legends»“STEIN ENCOURAGED US TO ENTERTAIN,” AULD
By CQN Magazine on 5th October 2016 Lions & Legends
“JOCK STEIN revolutionised things at Celtic Park and I was lucky enough to get in on the ground floor. I was 17-years-old when I signed for Celtic back in March, 1955 – just around the time Big Jock had picked up the injury that would end his playing career. He would have been in his early thirties when he was forced to give up, but, thankfully, someone at the club had the foresight to appoint him coach to the reserve team. And that’s where it all started. 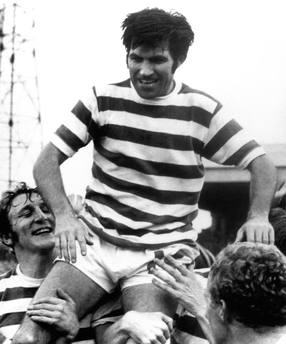 “I loved being in his company when he talked football. Other first team guys such as Bobby Evans, Bertie Peacock and Bobby Collins would meet at a place called Ferraris in Glasgow’s Sauchiehall Street and would chat about all things football. Jock would hold court and, even back then, it was obvious he knew what he was talking about. It was great being involved in the inner sanctum and, remember, Evans, Peacock and Collins were international players. When they talked, you listened.
“But no-one made a bigger impression than Jock Stein. I remember you had to chip in a shilling – five pence these days – as a tip, but sometimes I had to try to sneak out because I was skint!
“But Jock changed so many things with the reserves. Before he took over, we would turn about at 9.45 in the morning and then be told to go out and do laps for another two hours! Then someone would appear and throw a ball at us and tell us to organise a bounce game. There would be about 30 of us at the time and we were all scrambling for a kick at the thing. Jock wasn’t impressed and suddenly the chaos came to an end.
“He put the emphasis on pushing yourself to the absolute limit of your capabilities. He wanted to discover exactly what your ability could cope with. Mainly, though, he encouraged us to entertain. He wanted to win, but he wanted to win in a certain style. I left for Birmingham City and Big Jock w

as allowed to move to Dunfermline where he won the Scottish Cup in 1961, beating Celtic, of course.
“Around the turn of the year in 1965 I received a telephone call from someone asking: “Would you like to come back to Celtic?” “When? Tonight?” I replied. Honestly, I did not know if Big Jock was coming back a couple of months later, but I would still have returned. It was just such a massive boost when I did discover that The Boss was taking over. I dropped £5-per-week to come back. That was a lot of money back then, especially as I had a young family.
“I also had to find a house in Glasgow because I had been living in a Birmingham City club house at the time in Solihull. The wife might not have been exactly overjoyed at the time, but the upheaval was well worthwhile when Big Jock walked back in those front doors of Celtic Park.
“He should never have been allowed to leave in the first place.”
* Bertie Auld was speaking to Alex Gordon in 2007 for his best-selling book ‘Lisbons Lions: The 40th Anniversary’ – Alex’s new book ‘That Season in Paradise – Ten Months of Celtic Heaven’ is out now on CQN Books and is available from Celtic Stores and online from www.cqnbookstore.com