Celtic Quick News on News Now
You are at:Home»Latest News»STEVEN McLEAN ACCEPTS RESPONSIBILITY FOR ‘MISSED INCIDENT’
By CQN Magazine on 18th May 2016 Latest News
REFEREE STEVEN McLEAN has accepted responsibility for failing to award Celtic a penalty-kick in last season’s shock 3-2 Scottish Cup defeat against Caley Thistle.
The match official, who will be in charge of the Hampden showpiece encounter between Hibs and “Rangers” on Saturday, missed a blatant handball from Josh Meekings just before the interval. 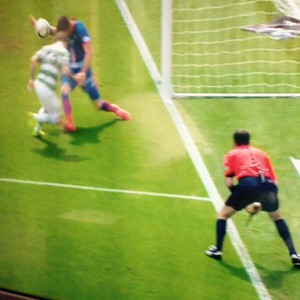 Ronny Deila’s team were already leading with a Virgil van Dijk free-kick and edging closer to a domestic Treble when the Highlanders’ defender illegally blocked a netbound header from Leigh Griffiths.
McLean, however, waved play on and Meekings also escaped what would have been a straight red card.
The incident was also overlooked by goalside assistant Alan Muir and linesman Frank Connor.

McLean admitted: “Of course, we learn from all experiences. Obviously that was an incident that was missed.

“It was disappointing on the day and I take ultimate responsibility for it. But we have a referee team and we share responsibility, so it’s important that we learn from those incidents. 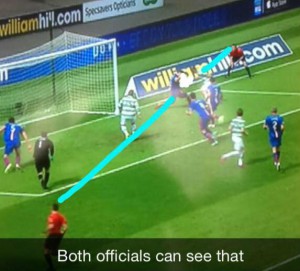 “But we use our experiences from both positive incidents and negative incidents just to move forward and use it as a learning opportunity and, hopefully, I have used that in the last season to perform well.
“I had a really consistent performance level this season and I think I have benefited from all my experiences in my career and that is what has enabled us to be in this position.”
McLean also sent off Celtic No.1 Craig Gordon in the 58th minute after the keeper hauled down Marley Watkins. Greg Tansey’s penalty-kick made it 1-1.
A goal three minutes from the end of extra-time by David Raven gave John Hughes’ side victory after Edward Ofere’s effort had been wiped out by John Guidetti’s deadball.
Celtic wrote to the SFA about this latest ‘honest mistake’ which could have cost the club a Treble.  Did they ever get a reply?
Meanwhile, the BBC reported this morning that Celtic’s youngest ever scorer, Jack Aitchison, is actually an Arsenal supporter.
No mention at all of the fact that ALL the match officials at the Scottish Cup Final this weekend support one of the clubs playing in the Final.
————————————-
CQN are planning to book advertising space in newspapers in England and Switzerland later this month in relation to Resolution 12. We are crowd funding this at the moment – thank you to everyone who has contributed so far.
The deadline this coming Friday and these advertisements are considerably more expensive that the Sunday Herald ad we booked last year. If you can contribute please do so HERE.
£5 from all books sold on CQNBookstore.com this week will be given to this Newspaper Statement fund. And if you order Charlie  Gallagher’s new book you will also receive a copy of The Winds of Change for FREE.