Celtic Quick News on News Now
You are at:Home»Latest News»STOKES VENTS HIS FRUSTRATION FROM INVERNESS
By CQN Magazine on 29th November 2015 Latest News

FROZEN OUT Celtic striker has taken to social media ahead of today’s match at Inverness to vent his frustration at his failure to be included in Ronny Deila’s current plans for the side.

Stokes posted on Twitter earlier today saying: ‘Buzzing to be brought all the way to Inverness with the team to sit in the stands today, lovely weather for it too…”

The response was quick from Celtic supporters, many of whom are currently making the same journey up the snow bound A9. The player was invited by PaultheTim to join the Bhoys behind the goal for a few songs while others were less friendly, reminding the player that he’s still happy to pick up the wages.

Stokes, who had also Tweeted that he was fit and ready to go having been putting in daily double sessions in an attempt to force his way back into the team, responded to the wages comments saying:

“Who gives a F***about wages when your (sic) not playing games! It’s all about playing and contributing not picking up a wage.”

Many Celtic supporters are already unhappy about Charlie Mulgrew walking away from the action just as Celtic went behind in the closing moments of the Europa League match with Ajax on Thursday evening.

Stokes’ outburst is likely to annoy elements of the support further.

Numerous players, including Craig Gordon, Gary Mackay Steven and Stuart Armstrong, have been vocal in their support for manager Ronny Deila, whose team has failed to win any of their last ten Europa League matches. Stokes’ Tweets ahead of the lunchtime league match is unlikely to go down well with the Norwegian.

Stokes may well have kicked his last ball for Celtic and could be first out the door when the window opens in January.

Screen shots below of Stokes’ Twitter page, apologies for the use of the F word. 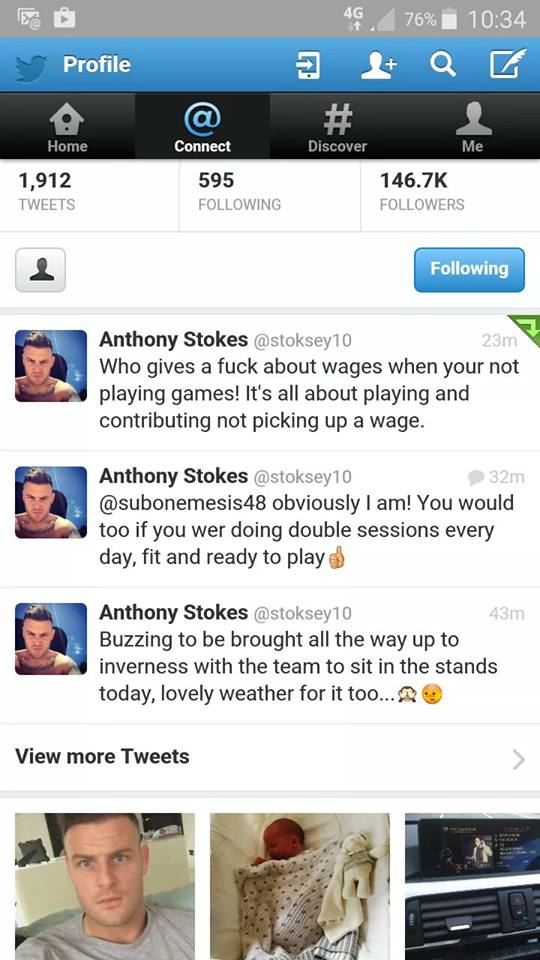