SCOTT BROWN insists Celtic were robbed of a penalty-kick in the 1-1 draw with Steven Gerrard’s Ibrox side at Parkhead this afternoon.

Borna Barisic was clearly reckless in a wayward challenge on Odsonne Edouard at the time the Hoops were leading through Mohamed Elyounoussi’s flying headed goal in the 23rd minute.

The Frenchman hit the deck, but, astonishingly referee Willie Collum stunned the home players by BOOKING the striker for diving.

It was a baffling decision from a match official who had a catalogue of them once more in a match concerning Celtic.

As well as Edouard, he yellow-carded Brown and Diego Laxalt while Alfredo Morelos, who claimed his side’s equaliser just before the interval, eventually had his name taken after a series of fouls on the Hoops captain. 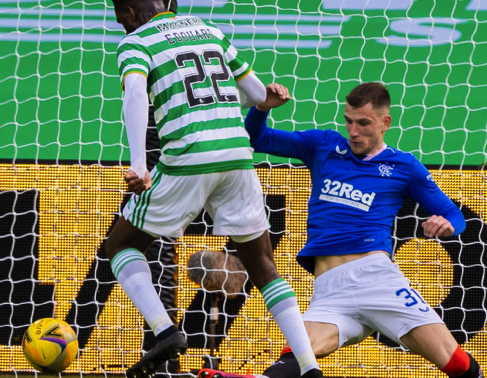 HEADING FOR A FALL…Borna Barisic cuts across Odsonne Edouard’s ankle, but ref decides it’s no penalty-kick.

But it was the denial of a spot-kick that proved to be a flashpoint in the third Glasgow derby of the campaign.

Brown said: “The first-half, we were exceptional. We could have had three or four and had a penalty denied, as well. It’s a stonewaller.

“There’s no need for Odsonne to go down as he chops inside. There’s contact – we saw it at half-time. It’s one of those ones if you go in 2-0 up at half-time, then it totally changes the game.

“They managed to get back in the game, but we had enough chances to win it. I thought we were very good today throughout the whole 90 minutes.

“I think today’s team performance was miles better than we’ve been this season – we probably deserved three points.”

The Hoops have dominated huge chunks of the last two encounters against the Govan outfit, but only have one goal and point to show for it. Gerrard’s side have scored four goals in the matches – three from set-plays, including an own goal winner from Callum McGregor in the previous outing at the turn of the year. 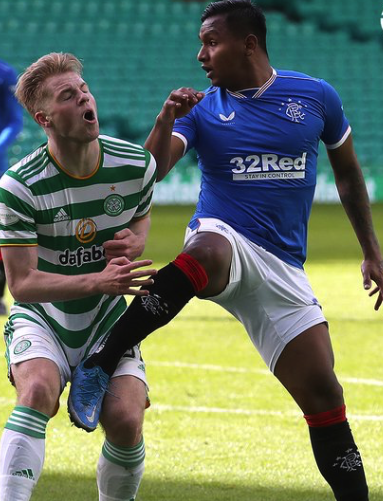 Brown, speaking to Sky Sports News, added: “I don’t think it’s just this fixture, it’s been a whole season for us. We’ve played some great football, but we just can’t get the ball in the back of the net.

“They have one shot on target and score one goal. It’s been a hard season for us. We’ve come back and been really good in the last three games. It shows the lads are still fighting, we’ve still got that pride in ourselves.

“We need to keep going, we’ve got a Scottish Cup to look forward to now. We’ve got a lot of games at home and the split, as well, so we need to make sure we finish the season as high as we possibly can and keep winning games and just push it on as far as we possibly can.

HONOURS EVEN IN STALEMATE