DARREN O’DEA, Celtic’s League Cup-winning hero a decade ago, has recalled the three words from Gordon Strachan before his historic goal against Rangers.

The Republic of Ireland international defender didn’t even expect to be in the line-up that memorable afternoon at the national stadium.

O’Dea, speaking to the Daily Record, said: “I’d played the week before, but Lee Naylor was coming back and I thought he’d make it.

“I didn’t find out until the team was announced before the game that he hadn’t and I was in.

“At Hampden, you walk through the manager’s bit to get to the toilet. I went through, but all he (Strachan) said to me was: ‘Better than Burnley eh?’. 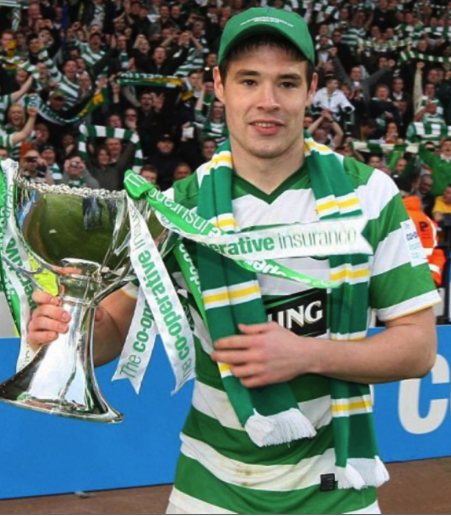 CAP THAT…Darren O’Dea, with suitable headgear, holds the League Cup after 2-0 win over Rangers a decade ago.

“I was meant to go on loan there in January and I really wanted to go. They were in the semi-final of the Carling Cup against Tottenham and in the running for promotion in the Championship under Owen Coyle.

“I really fancied it, but we had a couple of injuries and Gordon didn’t allow it. I think he knew I was a little bit hurt by it, but he didn’t say anything until that day at Hampden.

“Better than Burnley – he wasn’t wrong!”

Following a 90-minute stalemate, O’Dea propelled the Hoops towards the silverware with a soaring header that raged high into the net for the opener and Aiden McGeady made certain when he finished off in expert fashion after a superb solo run.

O’Dea continued: “It was bizarre how it all clicked in to place for me. I know it’s sounds daft, but it really was fairytale stuff.

“I was so desperate to go to Burnley and they ended up having a remarkable season. But I wouldn’t trade anything for what happened that day at Hampden.

“People laugh when I say I don’t remember much about the goal. All I recall was feeling absolutely exhausted.

“I hadn’t played a lot that season, but I always kept myself really fit and the 90 minutes were fine. But when we got to extra-time, I was really struggling.

“I was stretching after cramping up and Gordon told me in no uncertain terms to get up.

“I was physically gone, so when we got the free-kick I wasn’t thinking about scoring. I was so tired I was more worried about getting back afterwards.

“I was on autopilot and all I remember was the celebrations rather than the goal.

“I am quite realistic and straight after it my head was right back in the game. It wasn’t until much later on I could reflect on it. It was a great day for the club.” 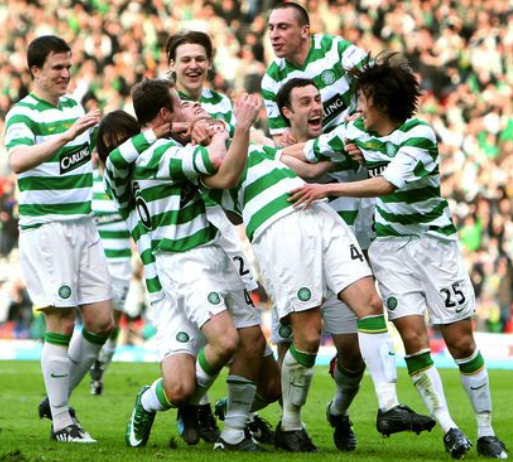 IRISH EYES ARE SMILING…Darren O’Dea is deluged by happy Celtic team-mates after his daramatic extra-time header.

It was Celtic’s first win over their Ibrox rivals in 20 years and O’Dea added: “I can’t lie, it is all the more special because it was against Rangers in the Final.

“It was weird, I was Celtic born and bred, but my mindset afterwards was I hoped I’d done enough to get a game the next week. That’s all I cared about.

“I didn’t take it in at the time and it’s only now looking back I know how special it was.

“Honestly, every day, whether I am at the garage or the supermarket, someone will mention that goal.

“I am not embarrassed to admit I was a fairly average player when you look at the talent that’s come through the club, but to have a small part in its history is magnificent.”

O’Dea’s job is now to bring through the next generation of Hoops first-teamers and he added: “It’s incredible. I think you only really appreciate the scale of the club when you do a job like this.

“The Cup Final back in 2009 is a great example to the young players here. Myself and Aiden both came through the academy and managed to score the goals that won the Cup.

“There’s the motivation right there for them. They can also see the like of James Forrest and Callum McGregor – Kieran Tierney,  as well.

“Celtic have always managed to produce great players and one of them could be the hero this time around.”