Celtic Quick News on News Now
You are at:Home»Latest News»‘STRANGE AND HARD TO TAKE,’ TURNBULL’S COMEBACK AIM
By CQN Magazine on 5th May 2022 Latest News

DAVID TURNBULL wants to make up for lost time as he focuses on Celtic’s three-game title run-in.

The skilful playmaker was sidelined for three months after sustaining a hamstring injury in the first-half of the Premier Sports League Cup Final against Hibs six days before Christmas.

Turnbull limped off and missed Kyogo Furuhashi’s double salvo after the break that brought the first piece of silverware for Ange Postecoglou and his new-look Hoops side following the club’s wretched previous campaign when they limped in without a trophy for the first time in 11 years.

Now the Big Prize – the Premiership title – is within the club’s grasp with the side sitting at the league summit six points ahead with three games to play in what has been a truly stupendous about-turn in the team’s fortunes. 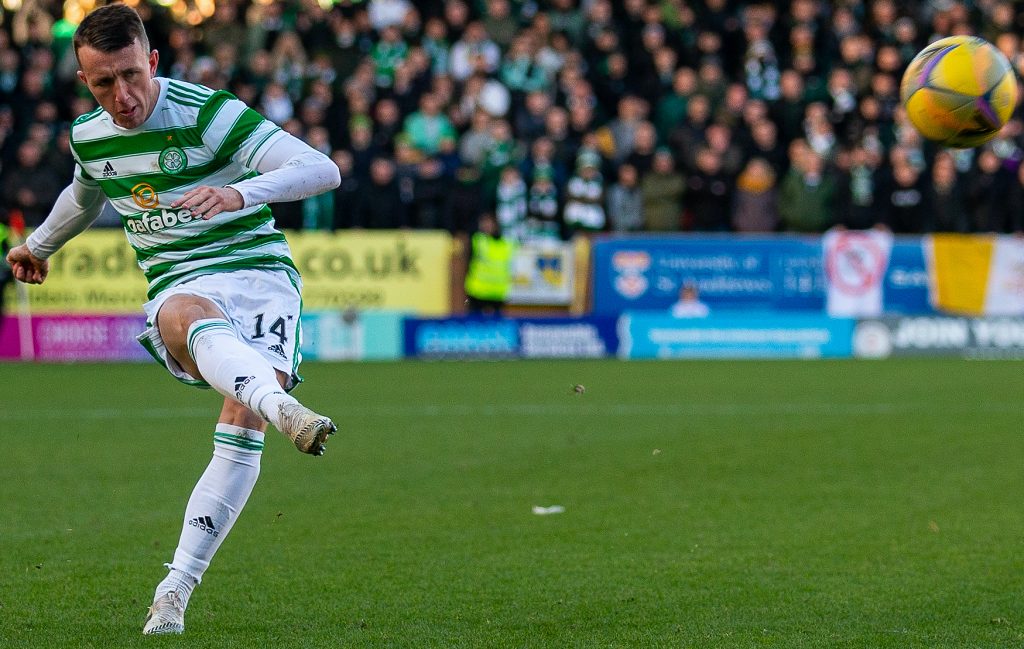 TAKING THE FREEWAY…David Turnbull fires in a free-kick.

Hearts are next up at Parkhead on Saturday with a trip to Tannadice – where Turnbull scored in a 3-0 victory earlier in the season – against Dundee United and then the final curtain three days later when the 22-year-old midfielder’s former Motherwell team visit the east end of Glasgow.

The Scotland international is determined to play his part and said: “It’s a good time to come back, I wish it was a bit sooner.

“But the first half of the season I really enjoyed. I felt the fittest I have ever been and I was just enjoying my football trying to help the team out.

“I just hope there is more of that to come. I’ve loved it – up until the injury. That was a bit of a strange one and hard to take.

“There are a lot of big games coming up, so, hopefully, I’ll be involved with them.” 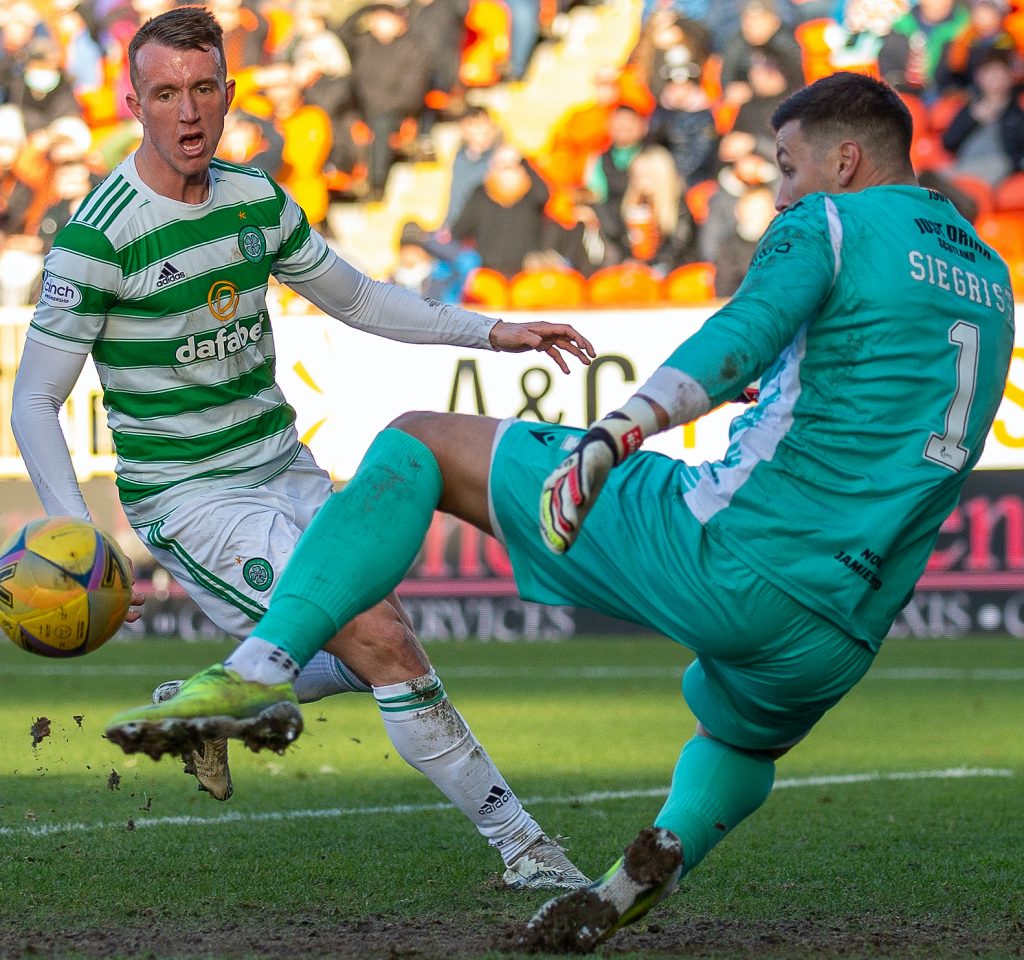 Turnbull, speaking to the Daily Record, continued: “I’m feeling good and it could have helped me in the long run.

“Maybe not at the time, but I’m looking forward to the rest of the season.”

On boss Ange Postecoglou, Turnbull, who claimed a hat-trick in the 6-0 trouncing of St Mirren at Parkhead in August, reflected: “He’s been a breath of fresh air since he came in and you’re always happy to hear him saying good stuff about you.”

Once the dust has settled on the domestic campaign – and the club’s tenth crown in 11 years is safely in the Parkhead trophy cabinet – Turnbull can switch his focus to the international scene.

Steve Clarke’s Scotland side will take on Ukraine in the World Cup play-off semi-final at Hampden at the start of next month and a victory will see them face Wales in the Final in Cardiff for the right to play in the winter spectacle in Qatar. 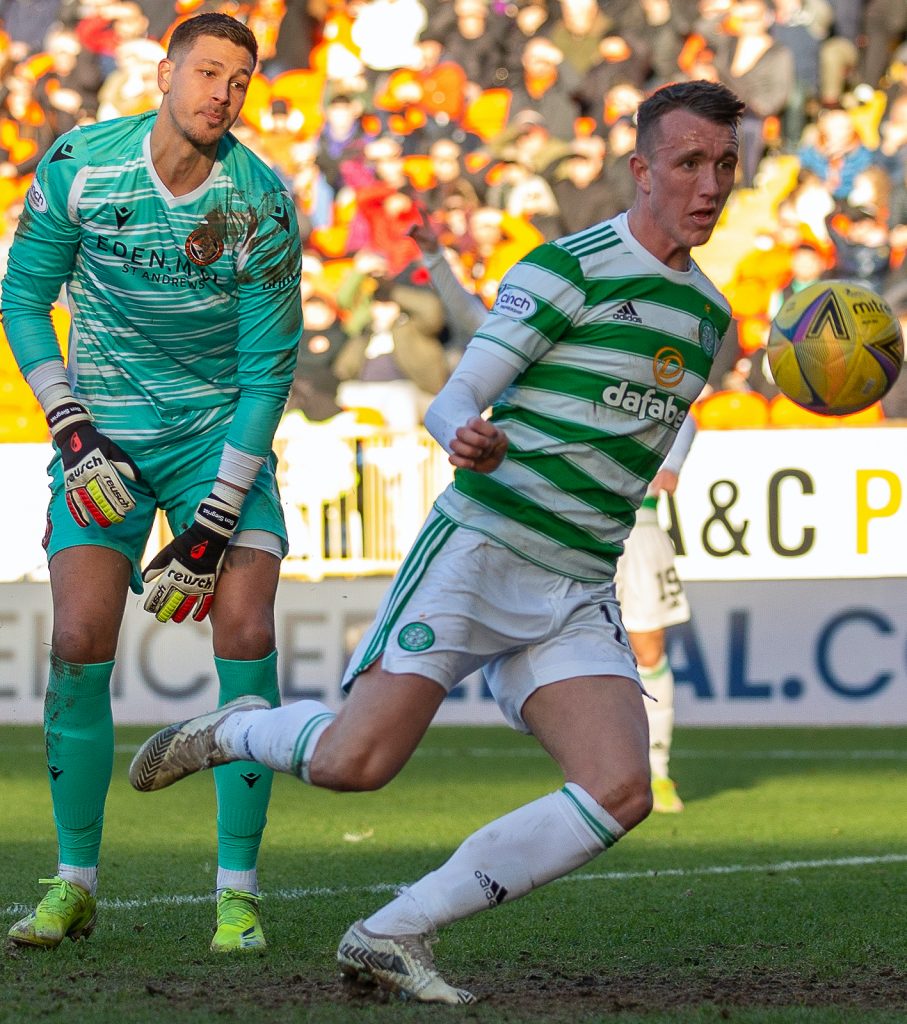 MISSION ACCOMPLISHED…David Turnbull leaves Benjamin Siegrist looking on helplessly as he prepares to score Celtic’s second goal in the 3-0 win over Dundee United at Tannadice in December.

Turnbull added: “Ukraine is one of the biggest games the country has had for a good number of years now, so just to be involved in that would be exciting.

“You don’t get much holidays these days, especially with internationals. There are plenty of games in the summer and I am hoping for that chance to go there feeling fit.”

The classy middle of the park performer could be joined in the global extravaganza – which is due from November 21 to December 18 – by team-mates Callum McGregor, Anthony Ralston, Greg Taylor and James Forrest.

But there is the little matter of getting past Ukraine and then Wales before anyone can plan for Qatar.

And, of course, there is the climax to Postecoglou’s amazing debut season at Parkhead to be addressed before a summer of celebration.