We have two hugely important away games coming up, which will hopefully go a long way to determining the title, but I get the sense there is a subplot beyond that.  Too many stories involving the words: Scott Brown, red card and dangerous tackle, have crept into the lexicon this week, all on the back of a ball-winning, non-dangerous tackle.

If I was a cynic I’d suggest the scene was being set for Scott Brown to be the focus of outrage and demands for his dismissal at every challenge during a cup tie coming your way soon.

Once we have the important games out of the way we’ll talk more about red cards, and the likelihood of Celtic picking one up at Hampden.

After 5-0 and 6-0 defeats to Celtic in their previous two games, Dundee took a clean sheet from Celtic Park last month, and had chances to take more than a point from the game.  They have only won one game since, Saturday’s 5-2 demolition of Ross County, who they are nip-and-tuck with for the final top six place before the split.

Before that draw at Celtic Park, Dundee were on a seven game unbeaten run.  Their form is nowhere near as good now, so I don’t expect them to be as adventurous as they were last month.  They will sit-in and play us on the counterattack.  The aforementioned Scott Brown and however partners him in central-mid have important defensive duties ahead.

After scoring 16 in his 15 appearances since the turn of the year, Leigh Griffiths hasn’t scored in two games – the first time he’s failed to score in consecutive domestic games since last season.  Do not bet against him tonight.

“Confidential documents leaked from a secretive Charlotte Fakes expose how the grasping mega-rich elite hide untold wealth to avoid paying their fair share of tax, a plea to the poor and working class across the globe….

Wake up world and smell the corruption”

Concerns about how the leaked documents came into the possession of over 100 journalists didn’t get in the way of thousands of media outlets reporting the contents.

Ever wondered how the Cameron family could afford the very best education money can buy for their son, David? Now you know. Or have you considered that Leonel Messi and Michel Platini might one day be bunkbed mates?

You are free to ponder these questions without some poor sod having to pester the life out of police, prosecutors, football authorities and the Scottish media (at not insignificant personal risk), because most of the western world reacts differently to news of corruption than we do here in Scotland.

Congratulations to the Celtic Development Squad, who won the league after 25 undefeated games this season.  Take a look at their league table: 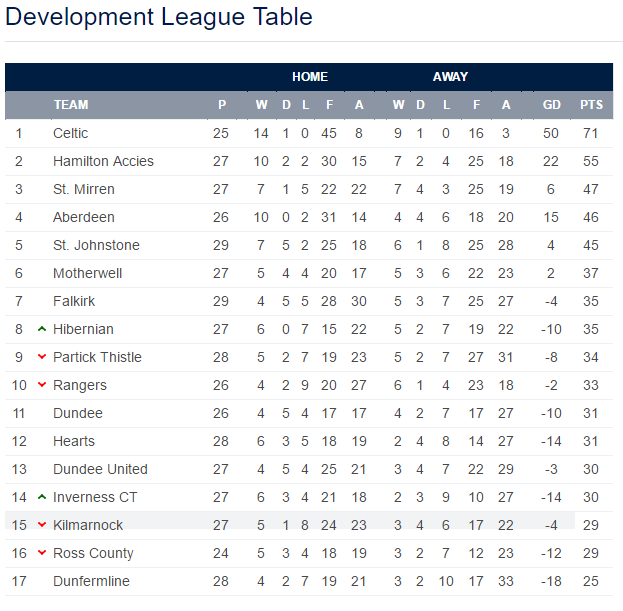