NEIL LENNON pointedly refused to enter any conversation about the possibility of him replacing Ronny Deila as Celtic manager, unlike other so-called potential candidates including David Moyes and Malky Mackay.

Lennon was left cash crisis Bolton Wanderers last week is keen to get back into management and has hinted that one day he’d love another crack at taking on Europe’s elite clubs managing Celtic in the Champions League. 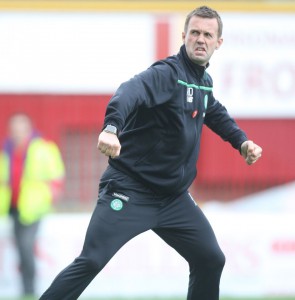 But having experienced highs and lows as the Celtic boss, Neil understands the need for the manager to have the backing of the Celtic support. Asked by a journalist if he’d be up for a quick fire management by taking up his old job in Paradise, Neil was having none of that chat.

“So if you are asking me am I going to replace Ronny you are not respecting the man in charge,” Neil barked. In a clear message to the Celtic support as the club heads into a crucial period aiming for a League and Scottish Cup double the former Celtic captain said:

“There is a manager in charge and you should support him the best you can.

“There will be times that he will disappoint you, just like I disappointed you, but just enjoy the ride and get behind him because he has the chance of winning the double this season.”

Certainly he seems to have regrets about his decision to leave Celtic, albeit on the very best of terms, in the summer of 2014, and once again pointed to the diminishing prospects for Celtic in the Champions League as a principal reason for his decision at that time.

Results in Europe for Celtic since since Lennon’s departure have been hugely disappointing, and given that is how Neil saw things pan out anyway, maybe Ronny Deila was dealt a pretty lousy hand in trying to take the club forward in Europe over the past two season. Lennon explained his decision after 4 years in the hot seat.

“By 2014 I’d had a taste of the Champions League and I wanted it again and again.

“I’d played in the Champions League and I’d managed in the competition and I couldn’t see it happening in the near future back then.

“It had been four years. I thought that it was a good time to take a break.

“You leave in the best possible terms in the hope that you can have a go again sometime later.”