The former Celtic striker believes the title winners require a midfield enforcer to take the weight of responsibility off skipper Callum McGregor.

Sutton highlights the fact his old club have suffered at the highest level without the presence of a ball winner who isn’t afraid to get involved in the ugly side of the game.

The one-time England international hitman said: “In my Celtic days it was Neil Lennon.

“Subsequently, it was the likes of Scott Brown and Victor Wanyama who did the job. 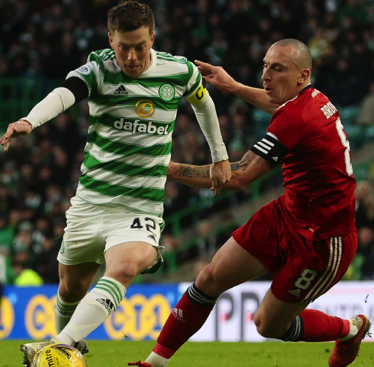 MIDFIELD BATTLE…Callum McGregor races away from former skipper Scott Brown in the 2-1 win over Aberdeen at Parkhead in November.

“It takes different pieces to fit a puzzle and, for all Celtic’s attacking quality, Ange Postecoglou will be aware you need balance.

“And I’m convinced the Hoops could do with getting an enforcer in the door. Not just for stepping up the levels to enter the heights of the Champions League group stages but to help on the home front, too.

“It was pretty difficult to pick holes in the way Celtic went about their business last season. There were so many good aspects, so many exciting sights.

“However, if there was one thing that I wondered about, it was physicality. I felt that, in certain circumstances, it would have helped them.

“Postecoglou wants to play a certain way and I think we all admire that.

“Get on the front foot and play the game you want. Don’t take a backward step.

“However, there are times in games when you don’t intend to take a backward step, it just happens.

“You get pushed back and you need people to hold firm.” 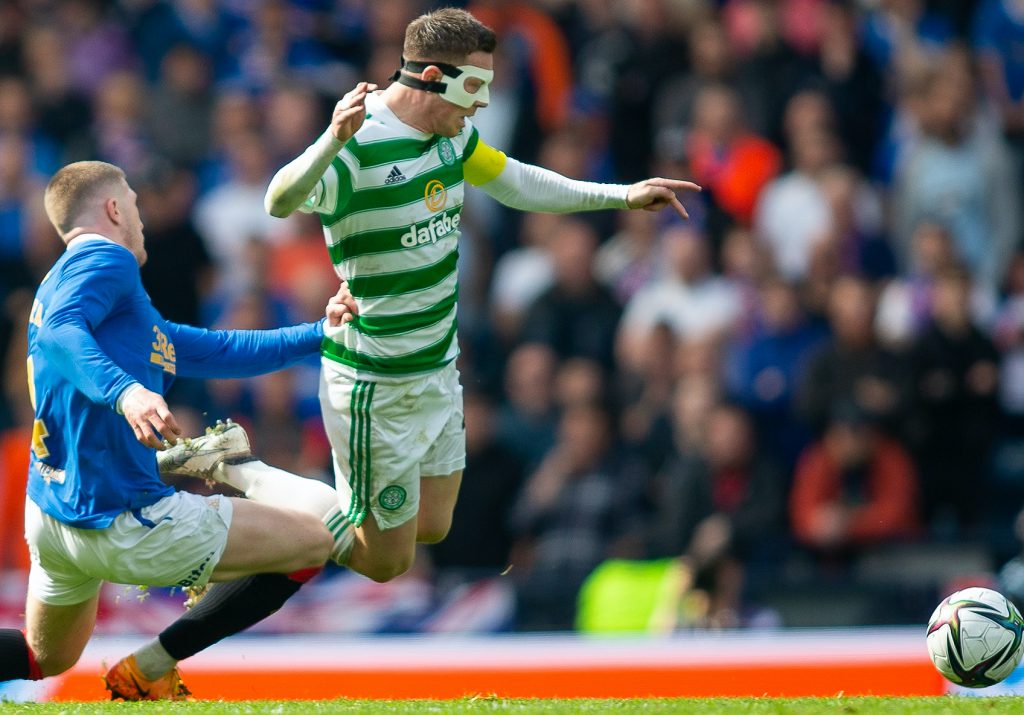 GOING DOWN…Callum McGregor is sent flying after a lunge from John Lundstram.

The point Sutton is making was evident in the Scottish Cup semi-final extra-time loss to Giovanni van Bronckhorst’s Ibrox side at Hampden in April.

The tie was settled when the unfortunate Carl Starfelt deflected a left-wing cross past the helpless Joe Hart after the Parkhead men had taken the lead with a rare goal from Greg Taylor.

However, the Hoops, bidding for a silverware clean sweep, were pushed back and Scott Arfield netted 12 minutes from time to take the game to an extra half-hour.

Postecoglou’s men toiled to put their stamp on the contest as they had done in the 3-0 win at Parkhead in February and the 2-1 victory at Ibrox in April.

However, with referee Bobby Madden adopting a remarkably lenient attitude, John Lundstram was allowed to throw himself into tackles that saw Celtic players knocked over like skittles. Amazingly, after five such assaults, the Englishman hadn’t even received a finger-wagging from the match official. 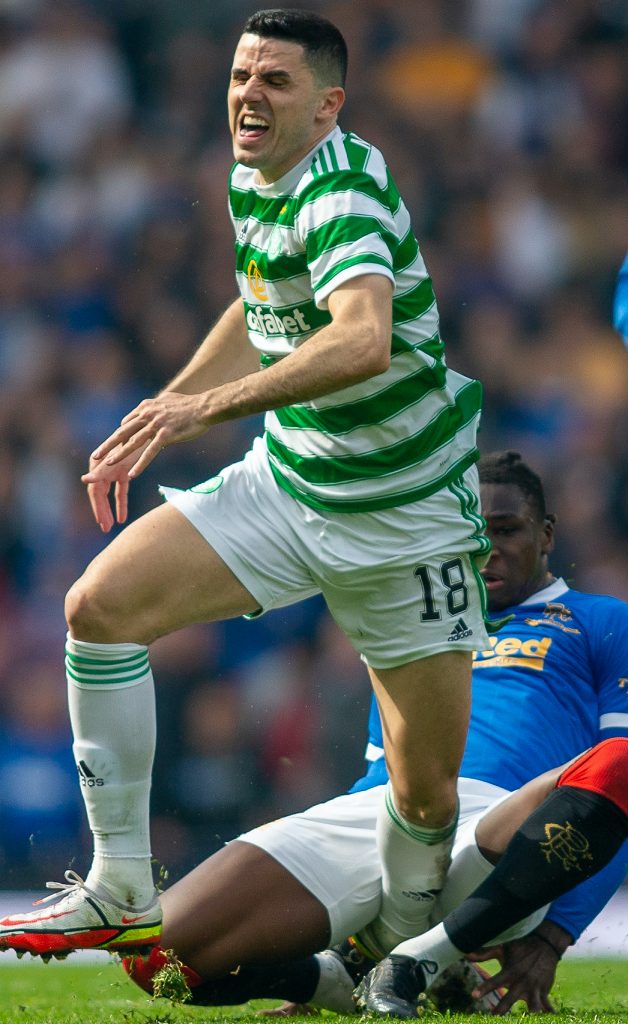 OUCH…Tom Rogic winces following a tackle from behind by Calvin Bassey.

Similarly, Calvin Bassey was practically wearing the same shirt as Tom Rogic and it was no surprise when the Australian was withdrawn before the hour mark with Matt O’Riley taking his place.

“Most of the time, you can cope with that, but not in Europe. In the Europa League, Postecoglou’s team were picked off time and again in the groups and lost five goals over two legs to Bodo/Glimt in the Conference League.

“There were times when it seemed Callum McGregor, as well as trying to make passes and keep the game ticking in one direction, was having to try and cover in front of his central backline by himself as waves crashed against him in the other.

“Nir Bitton has now gone and, when I think of Celtic going into the group stages of the Champions League, they are going to need someone to help hold the fort in the middle of the park.

“Given the way Postecoglou wants the game to be played, that’s a challenge for him and his recruitment staff.

“The Aussie isn’t just going to want a bruiser in there who just kicks people, makes tackles, covers runners but can’t pass the ball. 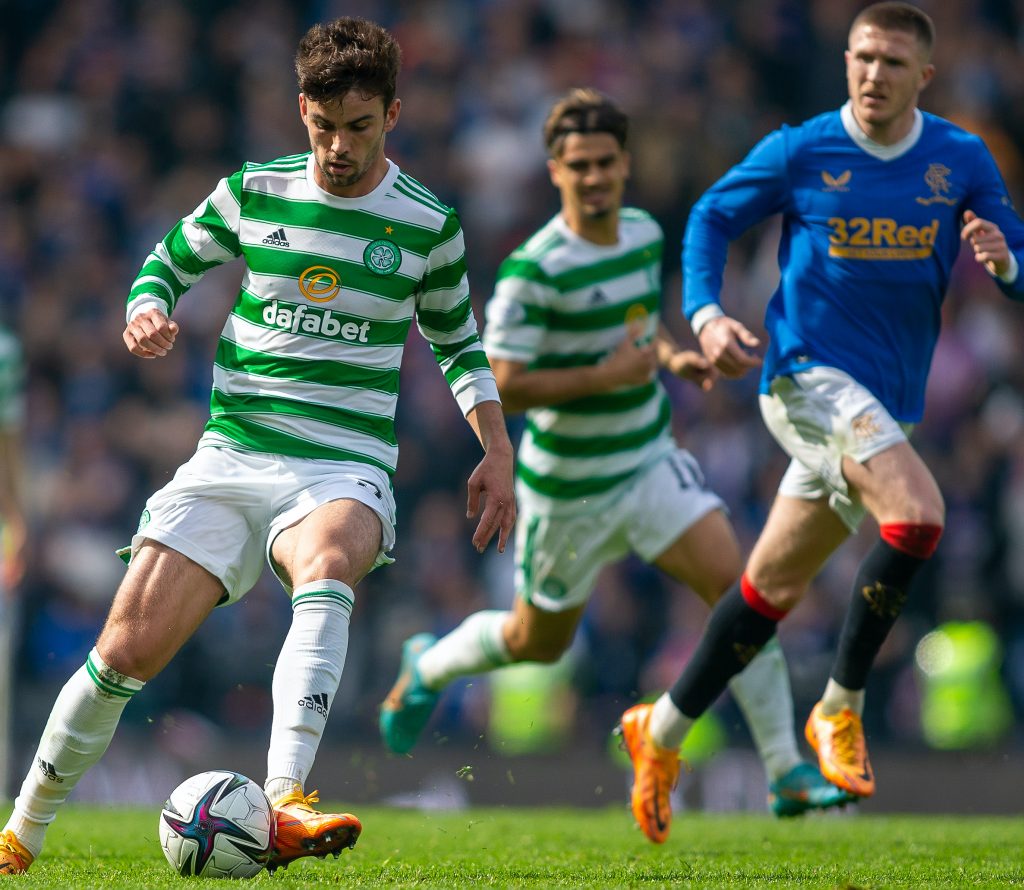 ON THE BALL…Matt O’Riley is watched closely by Ibrox enforcer John Lundstram.

“He’ll want someone who can play as well as do the ugly side to a high level and, in the modern game, prices for these fellas can range up to around £50million.

“Finding that diamond in the rough, as they did with Wanyama, is the task. I see Brazilian Vinicius Souza is one name mentioned for the role, so it seems they are looking.

“I feel it’s a must. Bitton did an admirable job playing that position and there is no-one else like him in there with his stature and presence.

“Ismaila Soro isn’t the answer and you wonder if Yosuke Ideguchi might be able to.

“He’s not yet had a chance to flourish and, although he’s not the same as Bitton physically, neither was Lennon or Brown and they still managed to scavenge around putting out fires and dealing with danger to protect their centre-halves.

“Nonetheless, whether it is to anchor alongside McGregor and push him one up, Celtic need to source one because the rest of the midfielders are the same, if not in shape or size, but in style.

“David Turnbull, Matt O’Riley, Reo Hatate. All look to create, get on the ball and make passes. Be offensive and make things happen.

“In actual fact, they might need a couple in there because you can not rely on McGregor to play over 60 games every single season surely.” 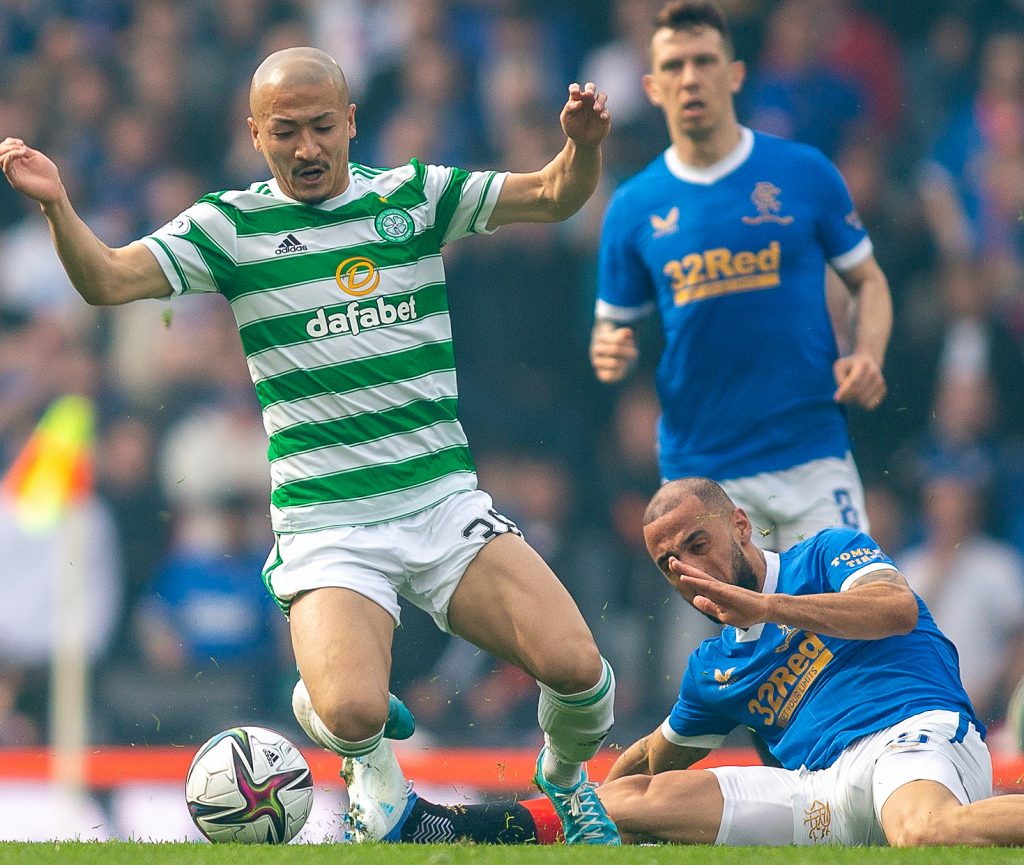 CRASH…Daizen Maeda is going down after a slide tackle from Kemar Roofe.

Sutton added: “Postecoglou is a smart manager. I’m not saying anything he won’t know himself and it will be interesting to see how he approaches it.

“Being aggressive and full of intent is one thing. Being gung-ho and leaving yourself wide open against the elite of the game is quite another.

“You can still be attacking and positive even with that insurance policy of a midfield enforcer. It’s about getting the right one.

“That’ll be down to the skills of the boss and the recruitment staff in the market.

“Their track record in the past year tells you they’ll probably find the answer.”