CHRIS SUTTON believes under-fire Neil Lennon seems “very, very lonely” during a testing time for the manager and the team.

The boss has been the target for some verbal assaults from raging fans in recent weeks and the situation took a nasty turn at Parkhead on Sunday night after the holders were knocked out of the Betfred League Cup by Ross County.

A baying mob gathered outside Parkhead and there were clashes with police amid chaotic scenes as violence threatened.

Lennon has just witnessed the club losing their first domestic Cup-tie in their 36th tie in a run that has seen them win only two of their last 10 games.

However, former goal hero Sutton insists his old team-mate deserves better support from his dug-out partners and has accused his No.2 John Kennedy and first-team coach Gavin Strachan of “running for the hills”.

The one-time England international striker, speaking to the Daily Record Celtic podcast, said: “I do have the utmost sympathy for Neil.

“Something which I’ve noticed – and I think other people have talked about – is he does seem very, very lonely at this moment in time when he’s standing in the technical area.

“I think I’ve always associated his good spells in management – and there have been ups and downs – he’s always had a team with him. 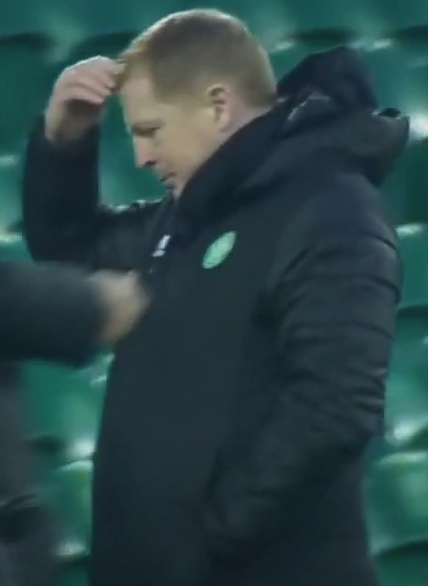 STRANGER IN PARADISE…Neil Lennon looks dismayed at Parkhead on Sunday.

“He’s always had a closeness with an assistant and I don’t think that he’s necessarily being helped enough by John Kennedy and Gavin Strachan.

“They seem to want to be aloof and distance themselves when they should be standing right up alongside him.

“I think that’s been an issue for a while.”

Sutton added: “I don’t know the situation with regards to appointments, but I do know that when the likes of Johan Mjallby was alongside Neil, Johan Mjallby would tell Neil what he actually thought and what he should be doing.

“He’s a friend of Neil’s, he has Neil’s best interests at heart.

“Now I’m not suggesting that John Kennedy and Gavin Strachan don’t, but I do think it’s been very, very noticeable that Neil seems to be carrying this burden on his own.

“I know people will be saying: ‘Well, John Kennedy’s a defensive coach and Gavin Strachan is a coach and the manager is responsible for everything’.

“But what I would would want to have seen is to see them be visible, whatever it is to show him more support than they have done.

“They seem to be running for the hills.”

Lennon and Celtic go back into action tomorrow night against AC Milan at the San Siro in their second last meaningless Europa League Group H encounter before facing St Johnstone in the Premiership on Sunday.