The on-loan West Brom forward was forced to lead the line again with Odsonne Edouard still not 100 per cent fit and expected to last 90 minutes against La Liga opposition.

Brendan Rodgers had little striking options with £2million Ivorian international Vakoun Issouf Bayo left out of his European squad because of the lack of match sharpness with his last competitive outing coming on December 8.

Scotland frontman Leigh Griffiths, of course, is still missing due to personal issues.

Burke, 21, who is normally a winger, had scored three goals in his previous seven outings for the team, but didn’t get a sniff against the Spanish outfit.

Former striker Sutton, Martin O’Neill’s first buy for the club following a £6million switch from Chelsea in the summer of 2000, said: “I’ve got nothing but praise for the willingness of Oliver Burke. He grafts and does a shift.

“But are you telling me that a boy who is a winger and having to mould him into a striker for major European ties is a really acceptable way to advance?

“It’s not his fault, but he doesn’t know the position properly yet. 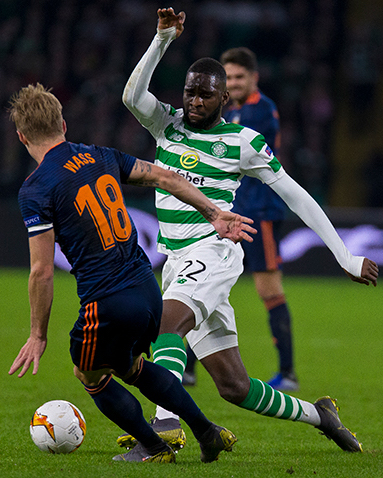 ON THE CHARGE…Odsonne Edouard takes on the Valencia defence.

“There were times when Burke needed to show or spin – or offer an outlet to help Celtic get up the pitch, but it just didn’t come naturally.

“He just wasn’t sure. You can’t blame him, he’s not an out-and-out striker.”

Sutton added: “It’s the same with Odsonne Edouard. He’s not an out-and-out No.9, either. And, anyway, where is he?

“This is the record signing. Bought for games like Valencia. He was fit enough for the bench, so why’s he not starting? Is it because he’s a work in progress, as well?

“It’s fine for boys to learn the trade against St Mirren and Hamilton Accies and get away it, but you won’t against top-level European defenders.”