ERIK SVIATCHENKO’S life has been turned upside down since he joined Celtic a year ago.

The Danish international centre-half cost £1,5million when arrived from Midtjylland as one of Ronny Deila’s last signings for the Hoops.

He left Denmark as their top-flight’s Player of the Year and has now settled into an excellent partnership at the Hoops alongside Croatian Under-21 international Jozo Simunovic.

Sviatchenko, who has six caps, can look back with some pride at his 12 months at the champions who are heading for six Premiership crowns in a row. 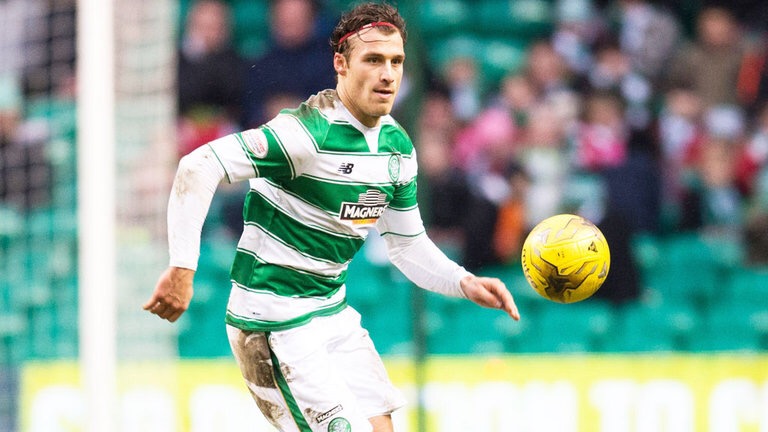 He said: “It has been a positive ride forward so far.

“There have been some bumps on the way, but they are bumps I’ve been able to overcome with the help of my team-mates and the staff.

“I’m really pleased with my development as a human being and as a footballer because it’s important to divide the two.

“When you go on the pitch you put on the Celtic shirt and perform as a footballer.

“But you need to live well outside the pitch and that’s why I’m able to perform at a high level because I feel comfortable and I feel like I can improve.

“It’s a good environment at Celtic.”

His son William was born at the end of last season and then his fiancee Anne joined him by signing at Parkhead – for Celtic Women.

His family have followed him to Glasgow. Twin sister Alexandra works for Celtic Foundation and her partner Emil is employed by a bakery in the city.

There’s nothing like keeping it in the Celtic Family!

*This week we have been running a very popular offer on CQN Bookstore – when you buy THAT SEASON IN PARADISE – TEN MONTHS OF CELTIC HEAVEN, not only is your copy personally signed by Lisbon Lion BERTIE AULD but you also receive a FREE copy of The Winds of Change – signed by ex-Celtic manager DAVIE HAY and a great Celtic DVD from 2012-13 season.
We only have EIGHT left though and this offer  can’t be repeated so hurry! You get all of the above for just £15.99 plus p&p so it’s an outstanding deal.
All orders this week have been posted except those from last night which will be going this morning.
If you want one of the last 8 available order HERE or click on the ad below.