Celtic Quick News on News Now
You are at:Home»Latest News»SWITCH IN TIME FOR CALMAC
By CQN Magazine on 6th February 2020 Latest News

CALLUM McGREGOR has applauded Neil Lennon for changing the Celtic formation that has sparked six victories since the champions returned from the mid-winter break.

The midfielder played his part in the 4-0 win over Motherwell at Fir Park last night with a spectacular third goal as the Hoops maintained their progress towards a ninth successive crown.

Odsonne Edouard, with another double following his duo against Hamilton Accies on Sunday, and comeback striker Leigh Griffiths, with his fourth since his return, also made certain the Parkhead men maintained their seven-point advantage at the top of the Premiership.

Boss Lennon again set up his side in a 3-5-2 system that saw the French ace partnered by the 29-year-old Scotland international to lead the attack.

The switch in tactics has brought 19 goals in six games and McGregor, speaking to the club website, insisted: “The change of shape has given us a continuity with the two boys up front firing.

“It’s a good system to play in and that’s why the attacking players are flourishing. 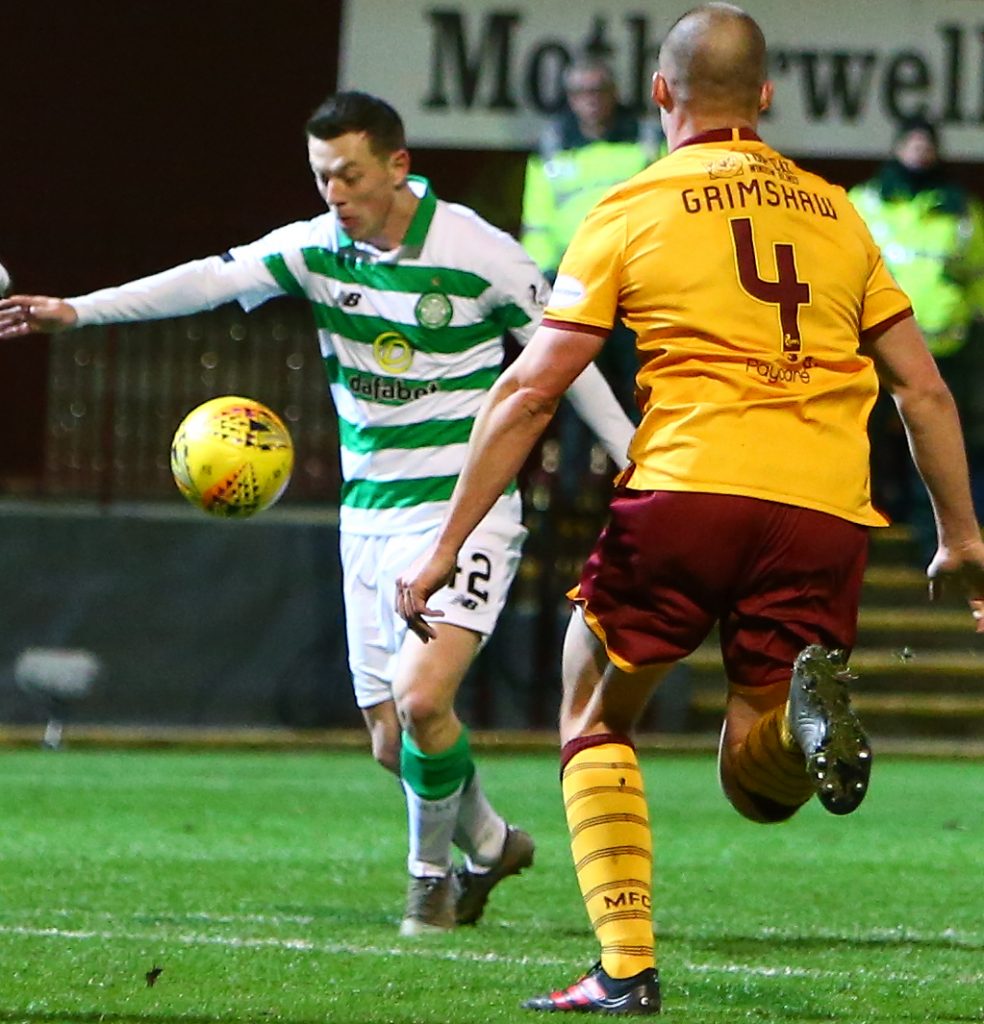 READY FOR TAKE-OFF…Callum McGregor is poised to fire in a left-foot drive. 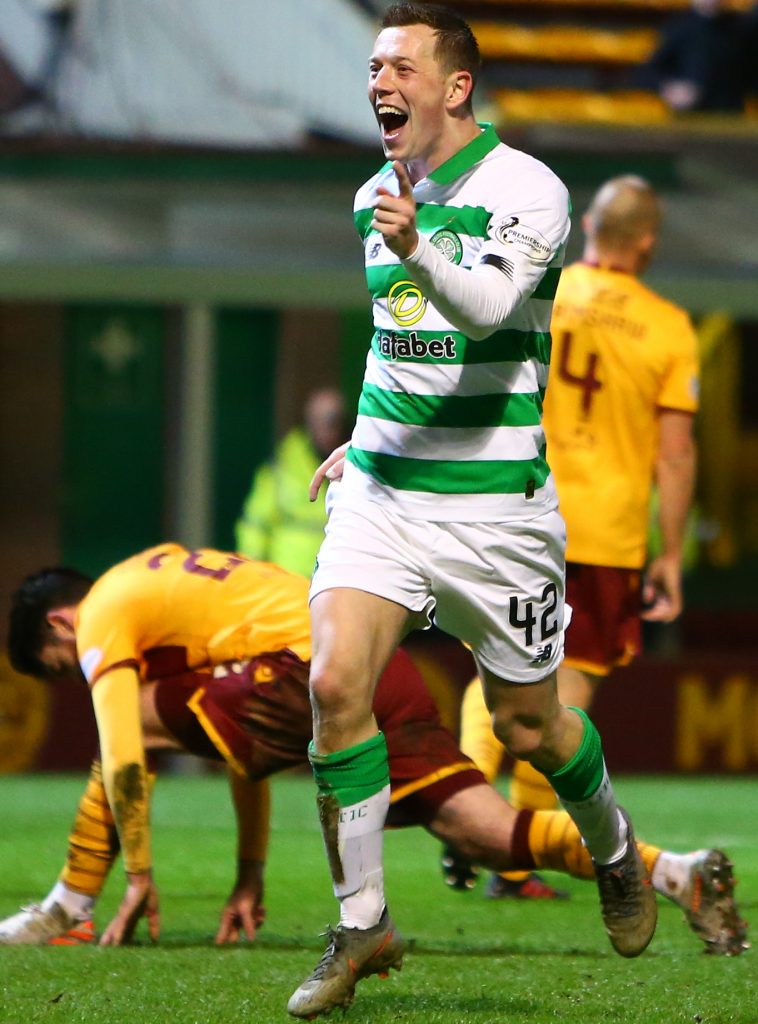 BACK OF THE NET…Callum McGregor races away in glee. 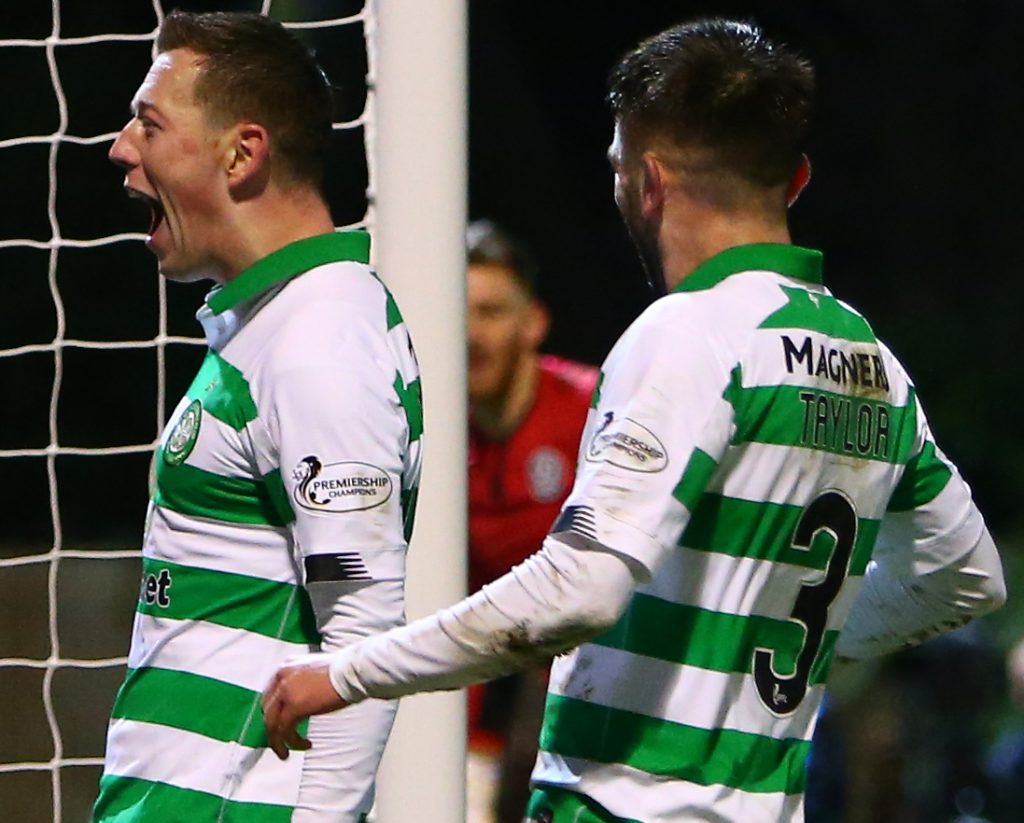 CHEERS…Callum McGregor is about to be congratulated by Greg Taylor.

“It gives us numbers. The way we’ve tweaked the system gives us more freedom to join in, as well. It’s more difficult for teams to pick up every player on the pitch with the way we’re working it. It’s good and it allows us to break forward more and try to contribute.

“It’s just about fine-tuning the system game after game and we’re learning to play even better. Griff and Odsonne have been on excellent form in terms of goals and assists. That’s given us a real platform to play well.”

Looking about the performances since the team returned from Dubai, McGregor continued: “We’ve started really well, but we know how quickly it can turn again, so it’s important we stay on it, remain humble and put in the good performances to keep winning games.

“When we come back we knew we really had to go foot to the floor. This is the point of the season where you really have to be ruthless with the performances and you see that with the chances that we get.”

On his own superb striker against the Fir Parkers, McGregor added: “It took a wee bobble which invited me to hit it and it was one of those nights where you see it flying into the top corner.

“It’s up there with the Scottish Cup final one against Motherwell with the half-volley. It’s nice to see them go in, but it’s very much about the team. The boys are really clicking into gear and it’s important we stay on it and keep working hard.”