Yesterday’s referee Craig Thomson is getting it from all quarters but I have some sympathy for him.  He saw the Scott Brown tackle and took no action.  The challenge was executed with extreme force but also with laser-like accuracy.  It didn’t injure or foul anyone.

Aiden Connolly dived to win Dundee United’s penalty.  Thomson could not have seen an infraction, because there wasn’t one, but when a player attempts to con a referee like this, it’s impossible for the ref to get it right all the time.

Virgil got involved with Butcher, both players on the ground, carelessly kicking away.  Both should have been cautioned.  Fifa guidelines entitle the referee to interpret this behaviour as a sending off offence, if he deems it appropriate- however, Thomson didn’t see it and took no action until his assistant, Graham Chambers, got involved.

It was evident from the length of time Thomson spoke to Chambers that the assistant was getting the third degree on what he claimed to have seen.  The ref asked several questions of his assistant to verify how sure he was of what he saw.  It was clear this was not corroborated by the Thomson’s own account.

Neither of them saw Nadir Ciftci kick Scott Brown on the head.  I didn’t see it either until I watched the incident a couple of times.

Chambers got things spectacularly wrong.  Like most others he missed the worst incident (Ciftci), advised the referee into red carding two players who should have been cautioned, and, to demonstrate how flustered he was, failed to notice which United player he put his arm on and led away from the action.

When a referee has an assistant, and a player like Connolly, to work with, he’s going to have a bad day.

As far as retrospective action is concerned: Scott Brown is in the clear, the referee saw what he did and was happy with it.  Ciftci presumably will be banned for violent conduct.  Connolly should be banned for simulation, unless Ronny is right that this rule applies only when players wear green and white hoops.  Paton should have his red card rescinded.

Virgil van Dijk has a case to have his red card reduced to a yellow – however – this being the SFA, I don’t think that will happen, as he is tied to Calum Butcher’s situation, and that is more complex.  If Virgil has his card reduced to a yellow, so too should Butcher, but Butcher was later booked – which would have been his second yellow.

A player who the assistant referee intended to remove from the field would not have been on to receive his booking had the assistant not nabbed the wrong player.  He also didn’t have the benefit of taking his caution into account.

The SFA will stick their fingers in their ears and insist the assistant’s initial interpretation was right, just to avoid the unholy mess of banning Butcher for two yellow cards while not banning the Celtic player, or deciding that Butcher’s (actual) yellow card should be ignored due to the player unfairly missing out on a caution.

Countdown is on to Friday night’s CQN11 St Patrick’s Dinner at the Kerrydale Suite, tickets will be in the post today.

Between now and then you can win a Celtic jersey signed by the 2008 squad, who won one of the most remarkable titles in our history.  All proceeds go towards building a fourth CQN school kitchen in Malawi for Mary’s Meals.

It’s been humbling watching people come forward and do their bit in recent weeks.  Tickets cost £5 each, you know how valuable this is to those kids and families in Malawi.  Buy your ticket here, or click the link at the bottom of that page to buy a book of tickets.

Friday’s programme is about to go to press…  The wee guy with the spoon is not from a stock photo, he’s been served at a kitchen YOU PAID FOR last year.  Stunning stuff. 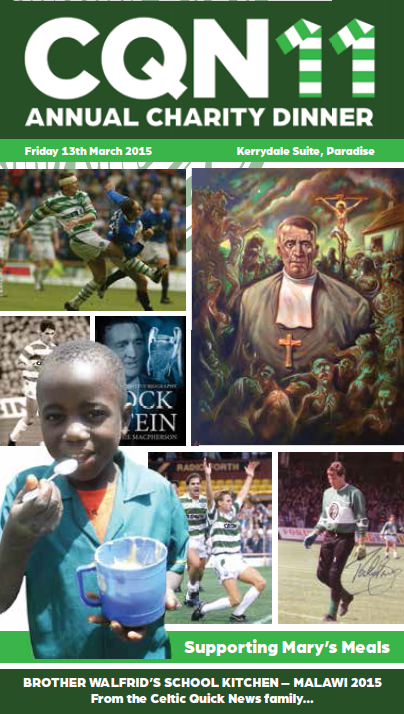