Celtic Quick News on News Now
You are at:Home»Football Matters»‘TACTICS? THEY GO OUT THE WINDOW WHEN MARTIN’S AROUND,’ REVEALS BELLAMY
By CQN Magazine on 11th October 2017 Football Matters

The eccentric ex-Hoops gaffer led the Republic of Ireland to a World Cup play-off place with their dramatic 1-0 win over Wales in Cardiff on Monday night.

And Bellamy, who had a loan spell at Parkhead in 2005, revealed O’Neill simply did it his way in pursuit of success.

The former Welsh international striker said: “As we go through coaching and managing and a lot of stuff we get taught, you can just throw it out the window.

“Martin O’Neill does the complete opposite. 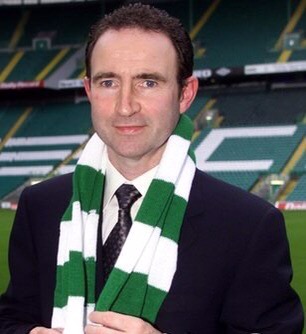 “There were times you would turn up on a Friday and you wouldn’t know what formation you’re playing on a Saturday.

“He would just read a list and I would have to look at Neil Lennon and ask: ‘What formation are we playing?’ There was no information whatsoever.

“But I tell you, he knew his players, you knew where you stood with him.

“If you played well for him, the confidence he would give you, the way he could make you feel, you would just want to run even more for him afterwards.

“If you didn’t, he was brilliant at being able to tell you.

“But there was no rocket science. For set-pieces, for instance, his teams are always brilliant.

“I never worked on one set-piece with him. Never.

“He just expects you to attack the ball in their box and your box. I can’t’ tell you why he does well, but it’s just something about the guy, he’s just an incredible, incredible man.

“I’ve said it before about Martin. I think he’s a manager who has the Midas touch.

“If it’s luck, motivational team talks, tweaking things at half-time, he just has a knack.

“This group of players just buys into what he does and normally it works.”

O’Neill won seven trophies, including three league titles, in his five seasons at Parkhead to become the club’s most successful manager since the legendary Jock Stein.

The two championships he didn’t win – both going to an EBT fueled Rangers – were on goal difference and by a single point. The Ibrox side dodged tax to field players that their then chairman David Murray later admitted under oath in the High Court in Glasgow could not have otherwise afforded.

Side letters were concealed from the football governing body whose president in the subsequent period also received a £95,000 EBT payment from the crooked club. But the SFA don’t want to rake over these old coals.

He was announced as Aston Villa’s new gaffer in August the following year.