Celtic Quick News on News Now
You are at:Home»Latest News»‘TALK TO ME IN APRIL’ SAYS DEFIANT DEILA
By CQN Magazine on 17th September 2015 Latest News
RONNY DEILA has assured the Celtic support that his side will be 5 In A Row Champions  and admitted he should be sacked if Celtic fail to retain their SPFL title.
The Hoops now trail Aberdeen by five points after the disappointment of failing to reach the Champions League group stages for the second successive year.
Tonight’s Europa League opener against Ajax in Amsterdam is a daunting prospect as the Norwegian seeks to get his side back to winning ways.
Deila insisted: “Please, I’m very confident in my team. I’m so confident in what we are doing. 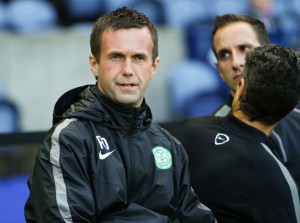 “We are going to prove that in the coming matches. Slaughter me if we don’t win the league.

“But we have a clear goal. There are 31 matches left. Talk to me in April and we will see where we are.

“We are very confident we are going to be top of the table when we come to the end of the season.