Celtic Quick News on News Now
You are at:Home»Latest News»TANNADICE AND BROONY’S STARTER FOR TEN
By CQN Magazine on 11th May 2022 Latest News

SCOTT BROWN won an extraordinary twenty-two honours during his glittering career at Celtic.

His starter for TEN title triumphs arrived at Tannadice on May 22 2008 – and Ange Postecoglou’s side get the opportunity to enjoy a championship-winning success at the same venue this evening.

Hopefully, it will be the beginning something extra special for the Greek-Australian gaffer and his determined squad of players who have refused to accept second best in a compelling campaign.

Fourteen years ago, a young Broony, now 36, was embarking on a thrilling adventure after joining up at Parkhead in the summer of 2007 following Gordon Strachan’s £4.4million bid that Hibs couldn’t refuse.

The Hoops boss, who was eyeing his third successive crown to emulate the achievements of club great Willie Maley and Jock Stein, had been busy during the pre-season and had also brought in strikers Scott McDonald, from Motherwell, and Chris Killen, who had come out of contract at the Easter Road outfit.

Italian Massimo Donati, a silky midfielder, also arrived in the east end of Glasgow after agreeing a £3million switch from AC Milan.

The title went all the way to the wire that nerve-shredding season, but it was settled on Tayside when Dutch hitman Jan Vennegoor of Hesselink towered above the home defence to thump a header beyond future Celt Lukasz Zaluska in the 72nd minute. 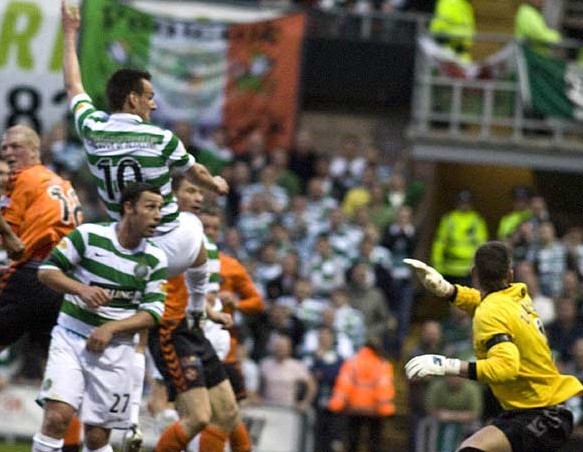 RISE AND SHINE…Jan Vennegoor of Hesselink leaps high above team-mate Scott McDonald to power in the title winner past Lukasz Zaluska. 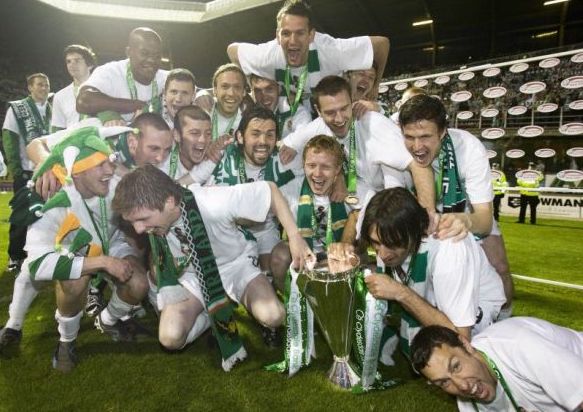 TANNADICE TITLE TRIUMPH…Celtic celebrate the club’s 42nd crown – with Scott McDonald (bottom right) just managing to get into the picture.

It was Celtic’s 42nd championship and they had to wait another four years before they won the flag again.

And that was the start of something good, too, for Scott Brown – another eight successive crowns were on their way to add to his silverware collection.