GREG TAYLOR is looking forward to getting the nod to play at Ibrox for the first time as a Celtic player on Sunday.

And the Scotland international left-back has told the Hoops fans that things can only get better as he learns his new role in Neil Lennon’s system.

Taylor, who arrived in a £2.25million September 2 transfer deadline day deal from Kilmarnock, is zeroing in on his first winner’s medal, a Scottish Cup semi-final meeting with Aberdeen next month and is certain to be involved in Steve Clarke’s Scotland international plans for the Euro 2020 play-off semi-final against Israel at Hampden a fortnight on Thursday.

The champions go into the Govan confrontation against Steven Gerrard’s outfit with a monumental 13-point advantage as they head for nine in a row and the defender is determined to make it a memorable derby debut.

Taylor, speaking to the Daily Record, said: “You can’t afford to take your foot off the pedal at a club this size. You have to put on a performance every week.

“We beat St Mirren on Saturday and now we want to get a positive result at Rangers.

“It doesn’t matter what the lead is. It’s the next game and that means it’s the most important.

“We are aware there is added impetus because of the size of the fixture, but that’s a challenge we are all looking forward to. 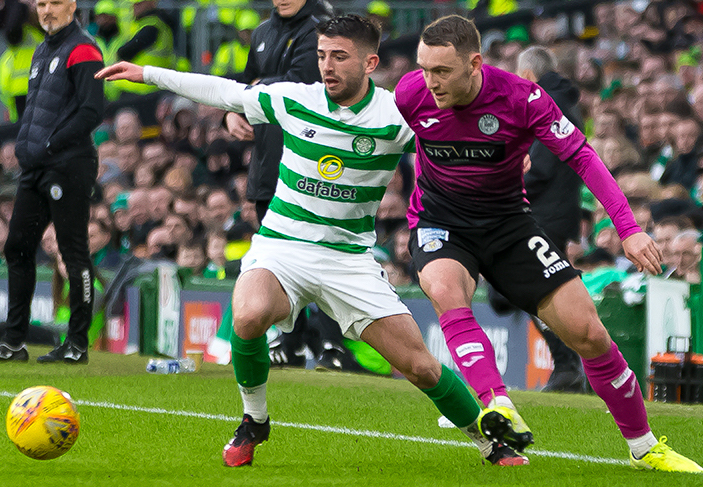 “I am at Celtic and this is a massive game, but we want to get a positive result.

“I signed the day after the first one this season and I was in the stand in December.

“It’s a massive game and one I am looking forward to.”

Gerrard and Co face a Europa League last-16 clash with Bayer Leverkusen on the Thursday before the Hoops arrive three days later while Lennon’s men have a week to prepare.

However, Taylor insisted: “We’d rather be playing in every competition, but it has been a long time since we had a free midweek.

“It has been constant since the start of the season with games every few days. So, this is a chance to get a rest and then build into Sunday’s game.”

Taylor has been involved in his manager’s recent change of system and added: “I am enjoying the role. It’s a position that is fairly new to me, but I am enjoying learning. It’s a chance for me to be further up the pitch and try to create goals.

“I didn’t get any assists against St Mirren, but, hopefully, there will be more as the games go on.

“It is different to what I was asked to do at Kilmarnock, but I’ve been at Celtic for seven months now.

“Gradually, you try to learn the role and I want to keep doing that. There are improvements to be made and I am under no illusions about that.

“But as the weeks and months go on, I will keep working at it.

“I listen to the coaches and the gaffer and ask what they want.

“If there is a game on the TV, it’s also natural you will look at guys playing in your position.

“You can only benefit from that, but the most important thing is to listen to the pointers from the coaching staff.

“I have four assists in the league and I want to keep improving on that side of things.”