KYOGO FURUHASHI revealed he was close to tears at the reception he received from the Celtic fans when he made his first appearance of 2022 against St Johnstone earlier this month.

The Parkhead crowd gave the Japanese striker a rousing welcome back after he had missed 17 consecutive games with a hamstring injury after hirpling off against the same opponents at McDiarmid Park on Boxing Day.

Kyogo, who claimed 16 goals in the first half of the campaign including the double salvo that won the Premier Sports League Cup against Hibs in December, admitted he was overwhelmed by the reaction from the followers.

However, he also said he had a regret as Ange Postecoglou’s side romped to a 7-0 triumph over the Perth club – he failed to cement the comeback with a goal.

JOY BHOY…Kyogo Furuhashi celebrates his winner against Hearts at Parkhead on December 2.

An emotional Kyogo told Celtic TV: “When I returned to the game, it was a very, very nice atmosphere.

“Home game, full stadium, that made me really happy.

“I was happy warming up and before going on the pitch the fans and supporters received me with a big applause.

“I felt the love of everybody. I was almost crying because I felt really happy.

“The team was really good in that game and I just wish I could have got a goal!” 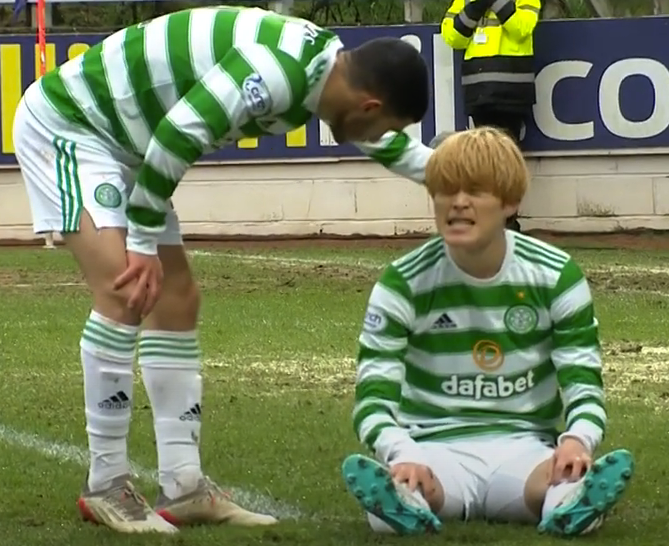 DOWN AND OUT…Kyogo Furuhashi is comforted by concerned team-mate Liel Abada before departing the action in Perth on Boxing Day.

Kyogo marked his first start at the weekend when he headed in the opener in the crucial 2-0 victory over Ross County in Dingwall for goal No.17 since his £4.6million arrival from J-League outfit Vissel Kobe in late July.

“Goals contribute to the victory of the team and make everybody happy ansd smile.”

Kyogo will almost certainly get the opportunity to add to his tally when the Hoops take on Giovanni van Bronckhorst’s Ibrox visitors in the High Noon shoot-out on Sunday.

A win for Postecoglou’s men will propel them nine points clear at the Premiership pinnacle with only three games to play.