CELTIC hero John Hartson insists Brendan Rodgers WILL remain at Parkhead and play a major role in the Hoops’ historic bid for 10 titles in a row.

The champions took a giant step towards the club’s eighth successive crown with the hard-fought 1-0 triumph over Kilmarnock at Rugby Park on Sunday.

The victory moved Rodgers men eight points clear at the top of the table with their main rivals toiling in what could be a definitive weekend.

Speculations persists in some quarters the 46-year-old Irishman could leave at the end of the season, but former striker Hartson dismisses such tales.

He said: “I don’t go along with the idea Brendan will leave Celtic in the summer.

“He loves his job and if he wins 10 in a row he could walk on water – and I think Brendan would quite like to walk on water!

“Brendan’s living the dream as it is. 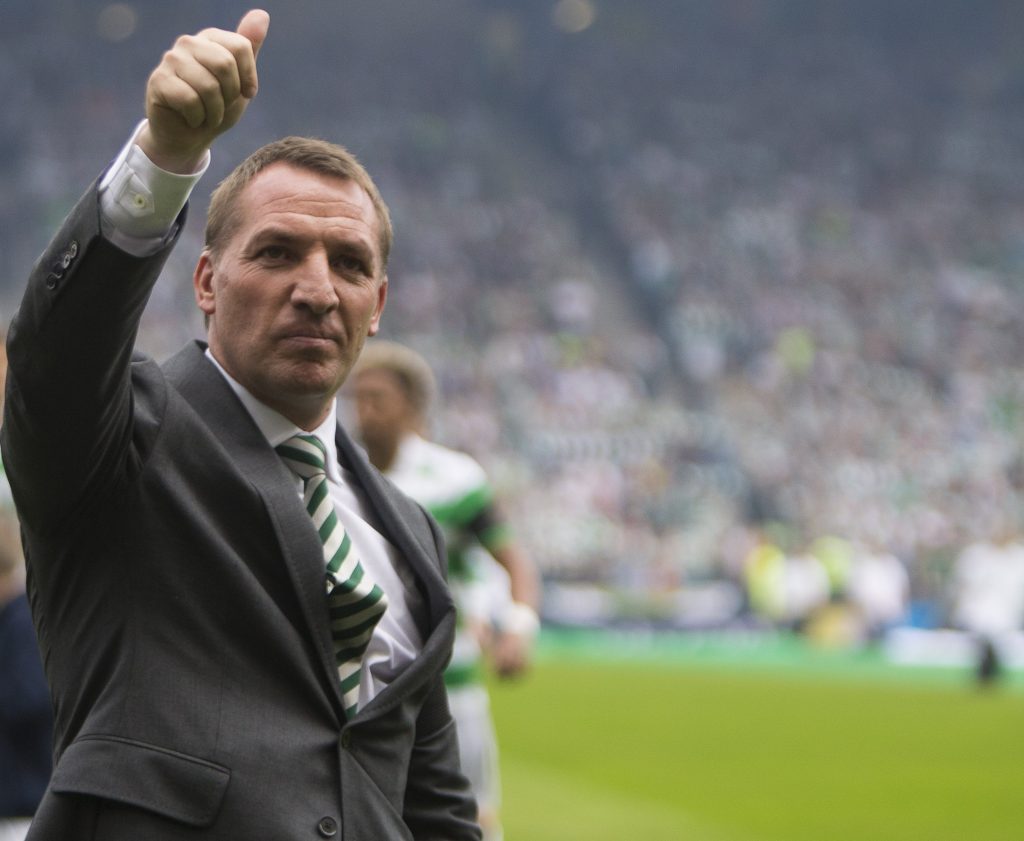 THUMBS UP…Brendan Rodgers signals to the Celtic fans at Hampden.

“It’s not about money for him, Brendan is very wealthy and he’s still very young in terms of management.

“As things are, he’s very well thought of and could probably pick his next job, whether that’s abroad or back in the Premier League.

“For now, though, I like to believe he’s at Celtic for the long haul.

“I said on TV the other night during the Europa League tie against Valencia it looked like some of the Celtic players had their eyes on a different prize.

“For me they want that treble again. That would be a monumental feat, if they were to go and do the triple treble.

“Right now, they’re favourites to do it, so Brendan will want to get that out of the way.

“He thinks game by game and the next trophy.

“I believe he’s here to stay. His contract tells you he has another few years left, so I don’t think there is any issue on that front.

“I don’t think there is any offer out there at the minute that would tempt Brendan away. He has managed big clubs, so it’s not about the money.

“No disrespect, but him being offered a big-money job elsewhere isn’t like someone at Livingston getting the chance to go to Celtic.

“I just think Brendan will want to create history.” 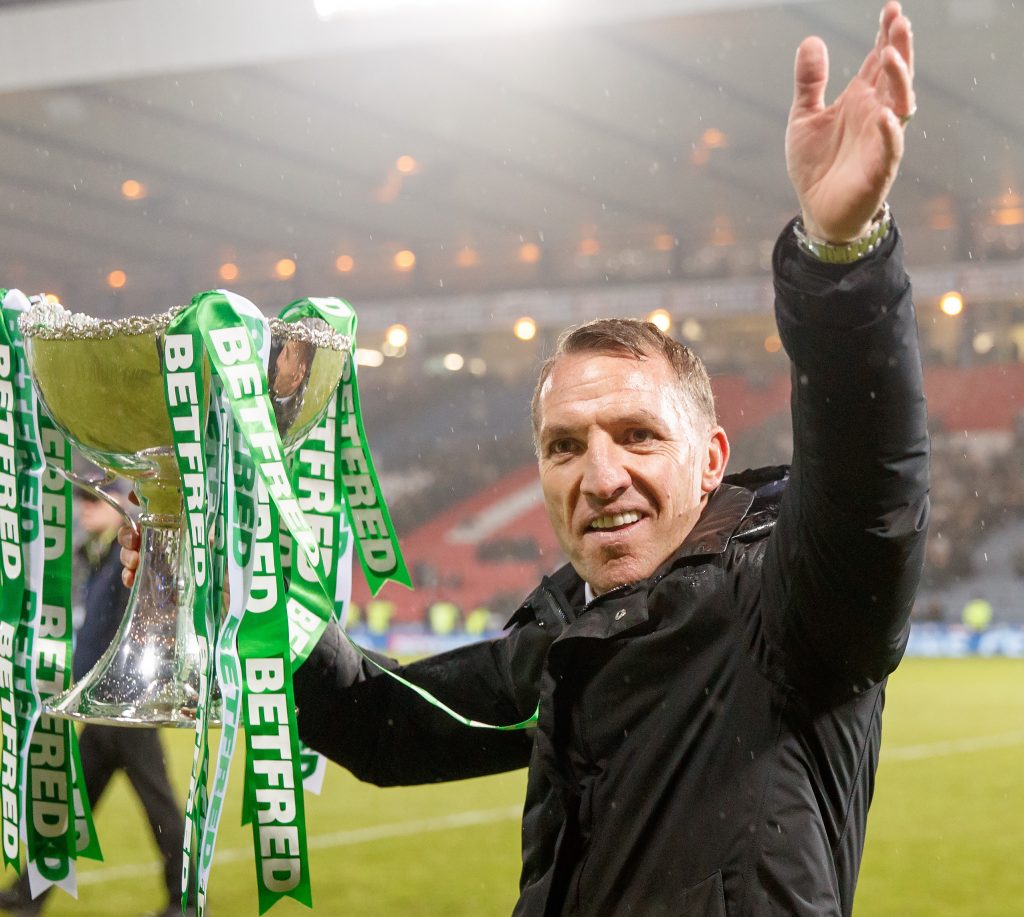 CUP THAT CHEERS…Brendan Rodgers with the League Cup this season.

Hartson, 43, added: “If it goes to eight – after Rangers had a go in the summer by appointing Steven Gerrard and bringing in 19 players – then, for me, the next two will be inevitable because Celtic will strengthen.

“If Celtic win the league this year it will Brendan’s most satisfying one.

“For the reason that Rangers got a bit closer and stronger and Aberdeen got stronger, too.

“Celtic had their problems during the summer when they didn’t get all their targets in and there were a few disgruntled people around the place.

“Celtic have lost four league games this season which is a lot for them.

“So, given the way the season has gone – and don’t forget Rangers were level on points with them when they beat them on December 29 – should Celtic go on to clinch the title it’d be the most pleasing one for Brendan.

“To have taken them over the line and make it eight in a row with everything else which has been going on will be a big thing for him.

“Celtic rode their luck with the goal against Kilmarnock as the ball was going over and it deflects in.

“It is a huge result for them, a momentum shifter.

“It is a huge blow to Rangers and Aberdeen in terms of the title race with Celtic winning so late.

“You can imagine the Rangers and Aberdeen fans thinking they had got away with their respective results at the weekend and then Broony’s late goal goes in.” 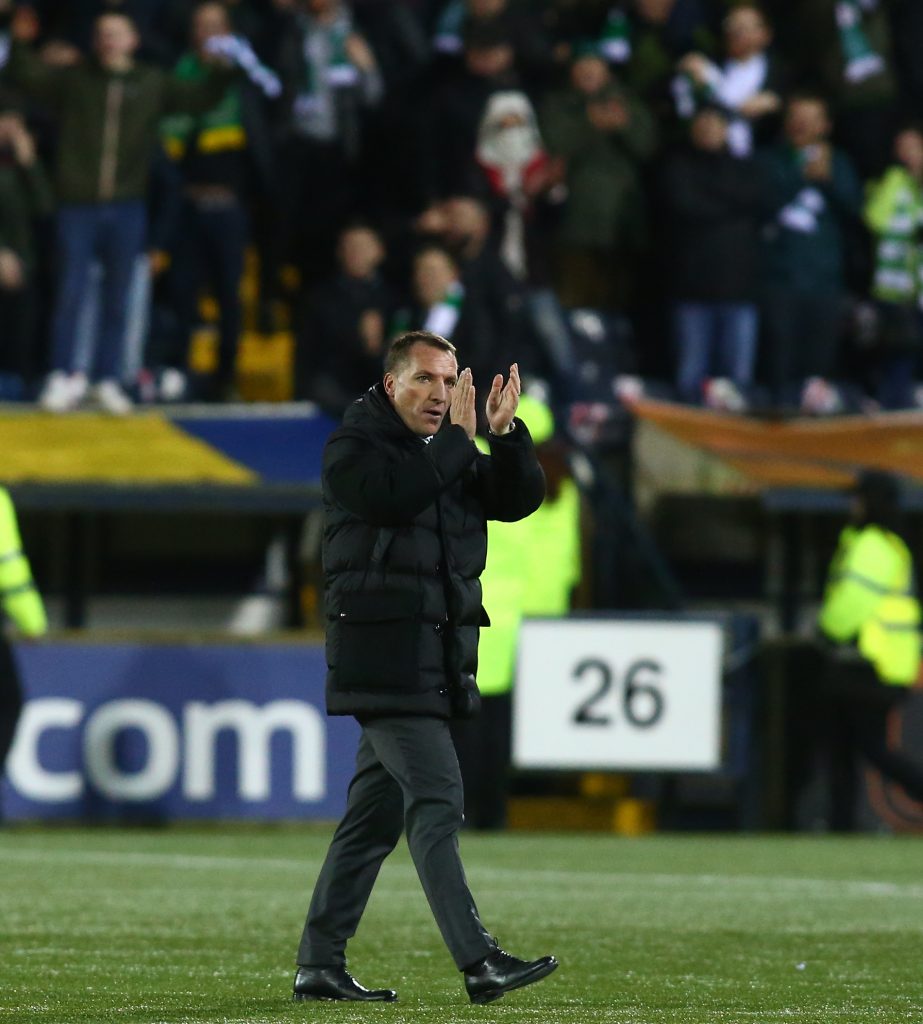 KILLIE CHEERS…Brendan Rodgers salutes the support after the dramatic win at Rugby Park on Sunday.

Celtic’s hopes of making progress in Europe are in jeopardy after last week’s disappointing 2-0 loss to Valencia in Glasgow and it will take a miracle to turn things around in the Mestalla on Thursday night.

However, Rodgers’ men get back to the business of collecting Premiership points on Sunday when Motherwell are the visitors.

The Hoops then visit Tynecastle to take on Hearts three days later and return to Edinburgh on the Saturday to face Hibs in the Scottish Cup quarter-final at Easter Road.

Success in all three encounters will edge the team to the brink of an unprecedented treble treble.

Hartson clearly believes it is not an achievement that is outwith the capabilities of Rodgers or his players.