Celtic Quick News on News Now
You are at:Home»Latest News»‘TERMINADO. GONE. MY JOB IS DONE.’ RODGERS TALKS ABOUT WHEN HE KNOWS IT’S OVER AT CELTIC
By CQN Magazine on 9th August 2018 Latest News

BRENDAN RODGERS has talked about the moment he will realise his days of managing his boyhood idols Celtic are at an end.

The champions’ boss denied there is a rift with the Parkhead board, but clearly there has been frustration at the lack of investment in the playing squad during the summer.

Rodgers missed out on top target John McGinn who quit Hibs for Aston Villa in a £2.75million deal earlier this week.

Asked if it would be over at Celtic if he stopped pushing to take the team forward, the Irishman replied: “Yeah. My job is done then. Terminado. Gone.

“It’s a joy to work here. I love my life here and enjoy being the manager here.

“But it’s no good if I just sit back and get comfortable. Being comfortable is the enemy of progress.

“I never allow it in my own life or professional life. You see it in sports and in industry. The minute you think you’re doing okay, it can quickly disappear – and that’s the greatest institutions.

“You have to be mindful of that and keep getting stronger and stronger.” 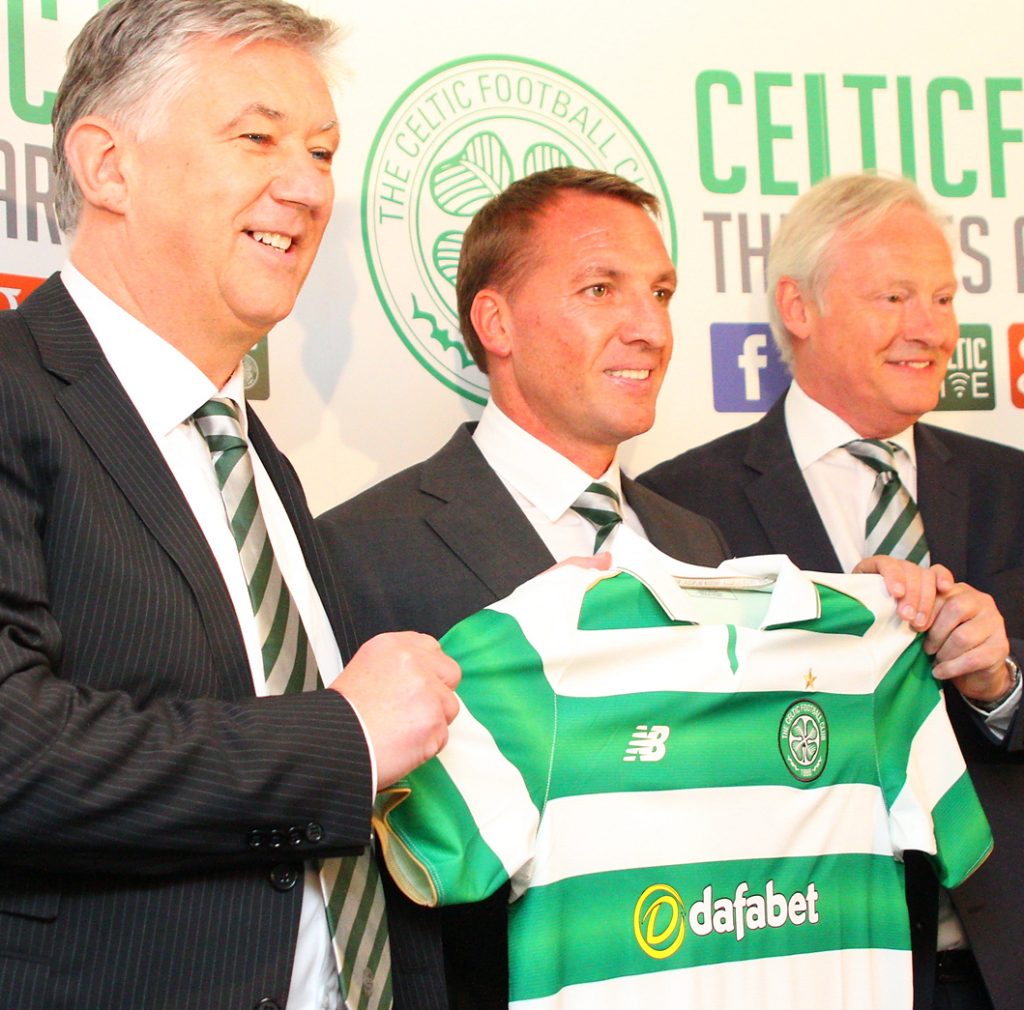 WELCOME TO CELTIC…Brendan Rodgers is greeted by chief executive Peter Lawwell and chairman Ian Bankier after his appointment in May 2016.

Rodgers insisted there had been no fall-out behind the scenes and added: “Dermott (Desmond ), Peter (Lawwell) and Ian (Bankier) all want what is best for Celtic. Critically, they are major shareholders and run the club. I have to respect that, and I do.

“My ambition is for Celtic. Every manger is ambitious, but, for me, it’s inherently about the club. We’ve done a double treble, been invincible in one of those seasons, set a British record for unbeaten games.

“We don’t want to stand still. How do we improve? We improve in Europe and in order to do that, it’s simple, is quality players.

“The minute I start thinking otherwise and get comfortable, then progress stops. In football you can’t afford to do that.

“It’s too late once the rot sets in. It’s too late. I’ve always tried to guard against it.

“Especially after our first season, we built on it last year. We want to keep building on it.

CELTIC FAN…Brendan Rodgers proudly holds aloft a green and white scarf to the fans on day one.

“I totally respect how difficult it can be, the financial side is tough at times.

“I have a huge respect for the board here – absolutely. They have run the club strategically very, very well.

“Me coming into here and what I have seen in the past couple of years, I have real good relations with every one of them.

“There is not an issue there at all. My focus is on doing the best for Celtic.

“Deep down I am a supporter, but I am also a professional manager. I also look for the help that is needed to take the team to the next level if that is what the demand is.

“I will always push for that.”