EUPHORIA will never fade from the recollection of Fraser Forster’s majestic and triumphant goalkeeping exhibition at Hampden on Sunday, December 8.

The awesome shotstopper was simply unbeatable as he stubbornly refused to yield a solitary goal in the victory that earned Celtic their tenth successive domestic honour.

Forster dived, twisted, blocked, parried and held a variety of efforts throughout a breathtaking Betfred League Cup Final confrontation that was settled by Christopher Jullien’s winner on the hour mark as the £7million French central defender turned a Ryan Christie left-wing free-kick beyond the static Allan McGregor.

Three minutes later, Alfredo Morelos had the ideal opportunity to score from a penalty-kick with the holders now down to 10 men following the expulsion of Jeremie Frimpong, the 18-year-old playing only his eighth first-team game and settling into the difficult duel with Steven Gerrard’s side with remarkable ease. The much-vaunted Colombian striker steered the ball towards Forster’s right-hand corner, but the towering netminder anticipated the direction of the attempt and sprawled magnificently to beat the ball to safety.

SPOT ON…Fraser Forster moves swiftly to his right as he prepares to save Alfredo Morelos’ penalty-kick.

There was only one destination for the silverware after that most recent act of defiance from the England international. In a couple of heartbeats, Celtic’s advantage had been maintained and, despite the burden of being a man short, they played with spirit and vigour for more than a third of the encounter to grind out the sort of result and performance that are the required hallmarks of winners.

Author Alex Gordon, whose fifteenth book on Celtic will be published early next year, had little doubts about the merits of Foster’s display as he told CQN: “I have never seen a better all-round and sustained performance from a Celtic keeper in my life.

“I have been watching Celtic since the early sixties when the regular No.1 was a flamboyant chap by the name of Frank Haffey. The trouble with this individual is you never knew which Frank Haffey would turn up. There was the wonderful Haffey. Unfortunately, there was also the woeful Haffey.

IN WITH A SHOUT…a jubilant Fraser Forster with the League Cup after his heroics at Hampden.

“For me, as a kid watching the game from the old Jungle with my dad John and uncles Hughie and George, he was the first in a long line of eccentric custodians. Anything could happen with Frank between the sticks.

“He had his moments, though. There was a memorable occasion when he denied an exceptional Rangers team for lengthy spells in a 1-1 Scottish Cup Final stalemate in May 1963.  It was known, quite rightly, as ‘The Haffey Final’ by the Celtic support.

“I recall being excited as I went to the replay with my best pal John Paterson. I was eleven years old and smack in the middle of a swaying Celtic end at Hampden. It was by far the biggest sporting occasion in my young life. No-one knew what to expect. Big Frank was slow to react to two moments of danger early in the first-half and it was virtually game over. He misjudged another long-range shot after the interval and my pal and I joined the serene exodus from the stadium, half of it in eerie silence while the other half danced and sang with joy. A surreal moment.”

Former best-selling national newspaper sports editor Gordon, who has penned the autobiographies of such club greats as Lisbon Lions Tommy Gemmell, Bertie Auld and John Hughes and also the legendary Davie Hay, continued: “John Fallon came in and for awhile it was a straight fight between him and Frank for the top spot. 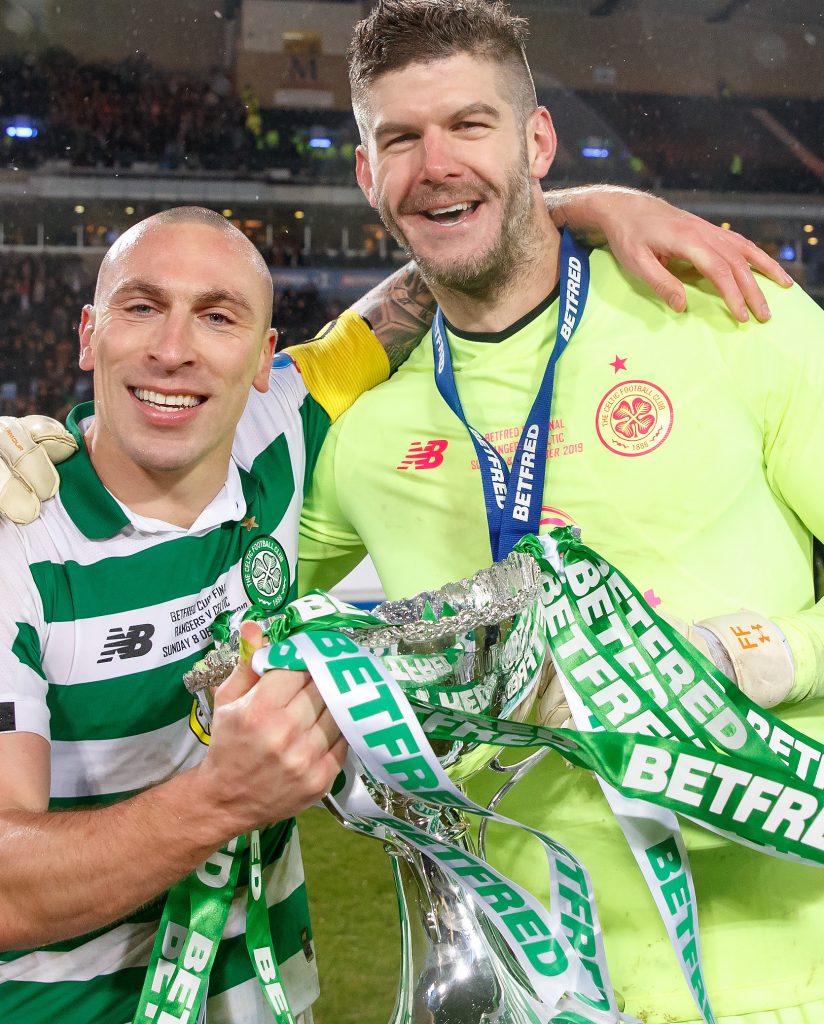 PRIZE GUYS…skipper Scott Brown and Fraser Forster with the silverware.

“Fallon was a steady sort of last line of defence who was not quite as colourful as his rival. Sifting around in my memory bank, I recall a save Fallon made for which he hardly received credit, but it went a long way to Celtic beating Dunfermline 3-2 in the Scottish Cup Final in April 1965 to lift their first trophy in eight years. It was the first piece of silverware I could recollect the team winning.

“Of course, it will always be remembered for immaculate captain Billy McNeill’s flashing header from Charlie Gallagher’s left-wing corner-kick near the end of a rollicking grand finale. The ball thudded into the net and, for the briefest of moments, Hampden was silent before the most glorious roar erupted that shook the famous old stadium to its foundations.

“Celtic had come back twice from a goal down with Bertie Auld equalising on both occasions and that was the first time a club had managed that particular feat in this fixture. Could they have come back a third time? At 2-2, tricky little Fife winger Alex Edwards had the opportunity to swing the Final back in favour of the East End Park club. Deftly, he tried to lift the ball over Fallon’s head from 16 yards and, from my viewpoint, it looked as though the ball was arcing towards the keeper’s top right-hand corner of the net.

“As the Celtic fans held their collective breath, Fallon managed to take off on an athletic leap and not only get both hands to the ball, but hold onto it, too. It was a blinding save now lost in the mists of time, but, trust me, that magical moment provided the launching pad for Big Billy’s soaring winner. 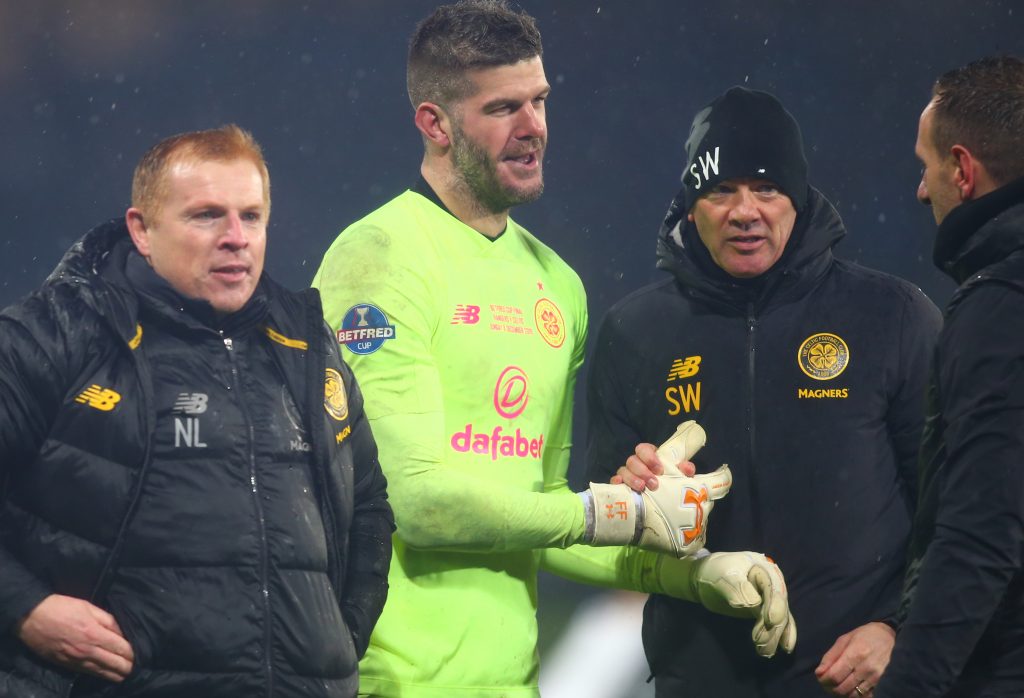 “Bertie Auld has always insisted that triumph was the most important turning point in Celtic’s resurgence under Jock Stein and led to the wonderful sequence of success that fell into place afterwards. Who am I to argue with such an icon?

“Ronnie Simpson came in, of course, and the sprightly veteran made the position his own until a shoulder injury forced his retirement at the age of 39. He was reliable and rarely showy. Like the best of keepers, he relied on his concentration rather than his ability to catapult across his penalty box.

“I recall one save he made against Rangers which I still rate as the best I have ever seen from a Celtic keeper. No-one remembers it as it was buried amid the debris of an upset 4-2 league loss at Parkhead in September 1968. In two previous League Cup-ties, Celtic had won 2-0 at Ibrox and 1-0 in the east end of Glasgow – Willie Wallace providing all three goals – and were expected to triumph in this one, as well.

“Let’s not dwell on mystifying proceedings that bizarre afternoon, but Ronnie produced a save of such stunning quality I had to make sure I watched the TV highlights later to see if it looked as good as it did in actual time. It didn’t – it was even more spectacular.

“Willie Johnston fired a low ball over from the left wing and Swedish forward Orjan Persson – or ‘Orange Person’, as he was wittily known among the Ibrox support – first-timed a ferocious shot from the six-yard line. It arrowed low towards Ronnie’s left and he had no right to even attempt to go for it. In a flash, though, he got down to stun the ball with his left hand and gather it in with his right. It was a moment that defied logic, physics and anything else you want to come up with.”

Gordon, who wrote the acclaimed tribute book to Billy McNeill, entitled ‘In Praise of Caesar’, which was published last year, also interviewed the existing European Cup-winning heroes for the ‘Lisbon Lions: The 40th Anniversary’, which was printed in 2007. He can rattle through his recollections of goalies performing miracles as they guarded the the Hoops’ goal.

He said: “Evan Williams was immense in the San Siro Stadium in the European Cup Final in 1970, but was an unsung hero with the team losing 2-1 to Feyenoord in extra-time. Similarly, Pat Bonner put in a marvellous showing in a European tie against Juventus in Turin in 1981, but Celtic again went down, this time 2-0, and the performance was largely overlooked. Billy McNeill had taken his team to Italy with a 1-0 advantage courtesy of a whizzbang effort from Murdo MacLeod in the first leg and they faced an almighty onslaught in the return leg with, ironically, future manager Liam Brady playing a key role for Juve.

“Peter Latchford was always a favourite and he was a real safe pair of hands in the 1-0 Scottish Cup Final of 1980 which will be remembered for George McCluskey’s clever back-heel beyond Rangers’ Peter McCloy and, for all the wrong reasons, the rioting fans who took the headlines the following day.

“A young David Marshall against Barcelona in the Nou Camp in 2003 was sensational. Pitched into such an important confrontation against an array of some of the world’s biggest names, he was unflappable and helped Martin O’Neill’s side claim a well-merited 1-0 aggregate victory courtesy of Alan Thompson’s goal at Parkhead.

“Artur Boruc? So many excellent, eye-catching saves from the Polish showman. It’s a case of take your pick, but one everyone remembers was his penalty-kick block from Louis Saha in the Champions League victory over Manchester United at Parkhead in 2006. 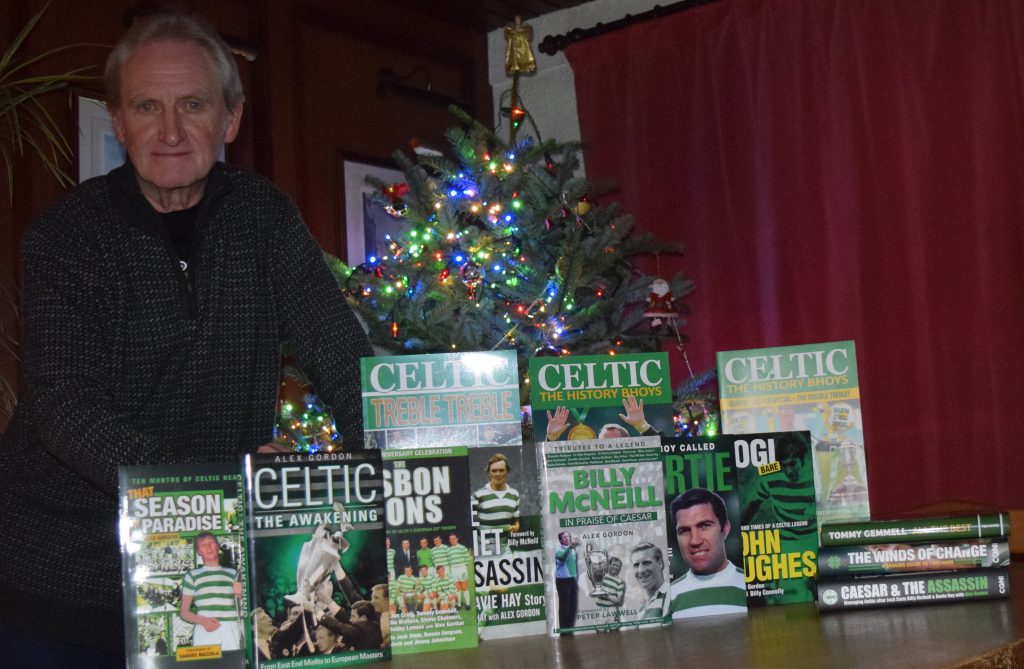 READ ALL ABOUT…author Alex Gordon with a collection of his Celtic books.

“Shunsuke Nakamura had Gordon Strachan’s side one goal ahead following one of his trademark free-kicks that flew straight and true from about 35 yards high into the left-hand corner of Edwin van der Sar’s net. A combination of two very different talents from two geniuses had fused to overcome Fergie’s men. Happy days.

“It’s worthwhile also noting a mesmerising reflex save from Craig Gordon in the Betfred League Cup Final only two years ago. A goal from James Forrest had Celtic ahead against Motherwell, but only four minutes after his clever, curling strike, Louis Moult was given a free header from six yards after a left-wing delivery from Andy Rose. The Fir Park dangerman threw him at the ball and must.have thought his effort was destined for the back of the net.

“The keeper, with the most acute of reflexes, threw up an arm and deflected the header onto the crossbar and Kieran Tierney booted the rebound clear. Shortly after that, Moussa Dembele stroked in a penalty-kick and the second successive League Cup was heading for the Parkhead trophy room.”

Gordon sighs and smiles: “It’s a veritable treasure trove of recollections. You could also add Fraser Forster’s display against Barcelona that earned him ‘The Great Wall’ moniker. Utterly deserved, too, and fabulous memories of displays of defying Messi and Co.

“However, it has taken me over half-a-century to witness the greatest-ever performance of a Celtic goalkeeper and Fraser Forster provided that at Hampden on Sunday. In my eyes, nothing will surpass that heroic accomplishment.

“It’s not often you instinctively know your goalkeeper is going to save a penalty-kick. I had that feeling at the weekend and I mean that as no disrespect to the kicker. It’s merely a tribute to the yellow-clad giant standing on the line who confronted him.

“I am not being wise after the event, either. I actually turned to my wife, Gerda, and said: ‘This guy is not going to lose a goal today’. In a blinding flash, he proved me right. The words, I hasten to add, were not said in desperation or even hope. I was convinced Forster would save that spot-kick. And, wonderfully, so it proved. The keeper had an aura of invincibility at the national stadium, a sheen most custodians seek to project, but only an exclusive band can actually achieve. He had it well under control on this showing.

“I’m sure legendary Hollywood funnyman and actor Bob Hope would not mind me borrowing his signature theme song as I convey one last message to Fraser Forster.

“Thanks for the memory.”

* HAPPY New Year when it arrives, folks! The CQN team wishes all our readers a healthy and prosperous 2020. Have a good one and we’ll seee you tomorrow!