SCOTT SINCLAIR thumped in his second hat-trick of the season – and immediately thanked Oliver Burke for setting up two on a plate.

The 29-year-old Englishman, who claimed three in the 4-3 win over Aberdeen at Pittodrie on Boxing Day, repeated the feat in the 5-0 Scottish Cup destruction of St Johnstone at Parkhead at the weekend.

Some fabulous work from on-loan Burke presented Sinclair with the first two of his trio and the left-sided raider was quick to acknowledge the service from the Scotland international.

He said: “Oli has been great and he showed that again with his two assists for me. 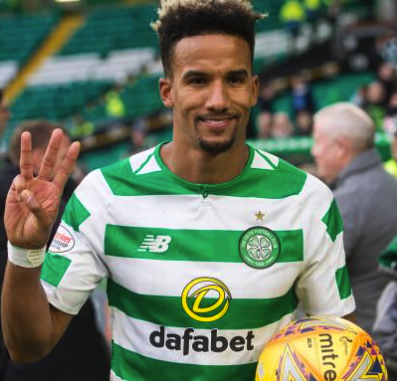 “He’s playing so well with his pace and his power. I am thankful for the assists.

“As I said, he has been great since he arrived at the club.

“Of course, it’s always good to score goals and to hit a hat-trick, but it was another great team performance and I think we played really well as a team.

“Now we have to keep going and keep winning.”

On a personal note, Sinclair, who was one of Brendan Rodgers’ first buys for the club when he agreed a £4.5million switch from Aston Villa in August 2016, added: “Yeah, I’m back, confident and scoring goals.

“I feel like I’m back in form and I just have to keep playing well and getting goals.”

Sinclair took his season’s tally to 16 with his three-goal salvo against the Perth outfit and has claimed 59 in total since arriving at Parkhead.

He will aim to continue his recent excellent chance-snapping into the Europa League ties against Valencia with the first encounter due at Parkhead on Thursday and the return at the Mestalla a week later.

* Sinclair was speaking to Celtic TV.