Today, the author looks at the aftermath of the team’s glorious triumph over Inter Milan in the European Cup Final on May 25 1967 in Lisbon. In this chapter, Alex turns the spotlight on the unforgettable encounter against Real Madrid when Jimmy Johnstone stole the show.

‘DONDE ESTA JOHNSTONE?’ Alfredo di Stefano was clearly perplexed. ‘Donde esta Johnstone?’ he repeated, raising the decibel level slightly. The iconic Real Madrid forward, once rated by Pele as ‘the most complete footballer in the history of the game’, was in a bit of a tizzy.

Di Stefano had assembled a spectacular line-up of legends following the banquet to celebrate his years with the team that conquered Europe five years in succession. Ferenc Puskas, Francisco Gento, Luis del Sol and Jose Santamaria were among a glittering collection of superstars from yesteryear – Cristiano Ronaldo would have struggled for a place on the substitute’s bench – who were booted and suited while the official club photographer checked once again to make sure there was film in his Pentax.

But there was no sign of Jimmy Johnstone. And Alfredo di Stefano was determined the Celtic winger would take pride of place in the photograph. He insisted the Wee Man’s presence was urgently required to grace the image. ‘Donde esta Johnstone?’ There was a crisp edge to Di Stefano’s tone now. Puskas and his exalted former team-mates were beginning to get a bit fidgety. Di Stefano instructed them to calm down; the picture would go ahead as soon as the Celtic player had been located.

At that precise moment, Jimmy Johnstone was propping up the bar in the players’ lounge at the Bernabeu Stadium, sipping his favourite tipple of vodka and Coke only an hour or so after spectacularly entertaining an audience of 120,000 in the Testimonial Match for Di Stefano, the sporting artiste who had been a boyhood hero of the football-crazy kid with the explosion of red curls who perfected his art of driving defenders towards a nervous breakdown by dancing round milk bottles on the streets of Uddingston with a ball seemingly glued to his toes.

As he relaxed, he knew his work for the season was done; the following day he and his wife Agnes would be heading for a relaxing fortnight on the beaches of Benidorm. 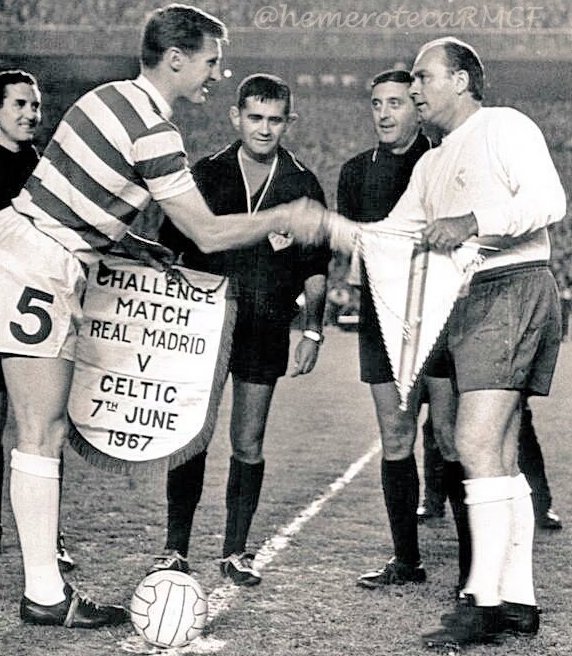 After wandering around the labyrinthine corridors of the famous old ground, Di Stefano was eventually pointed in the direction of Johnstone and persuaded him to join him and his former Real Madrid colleagues for the historic snap. Tommy Gemmell recalled, ‘At first, Jinky thought it was a wind-up. I think he said something to Alfredo like, “Ach, away ye go.” Can you imagine it? An assembled company of some of the greatest players the world has ever seen, players who had ruled football for years, and there was Wee Jinky telling the great Alfredo di Stefano to leave him alone?

‘When Alfredo managed to convince Wee Jinky he was deadly serious only then did he agree to go and join in for the snap. He was walking on air when he came back to the bar some fifteen minutes later. “I’ve just got ma picture taken with Alfredo and his mates,” he said. Then he laughed, “That’ll be something for them to tell their grandweans!”

‘But that was Jinky and nothing fazed him. He had just turned in the performance of a lifetime, had the Real Madrid fans yelling “Ole!” every time he touched the ball and had stolen the spotlight from the fabulous Di Stefano on his big night. Basically, he gate-crashed a legend’s party.’

Jimmy Johnstone’s illuminating display in the Spanish capital on the evening of June 7 bordered on the magical, eclipsing everyone else on show. Di Stefano, a month before his forty-first birthday, chose the newly-crowned European champions as his preferred opponents for the grand occasion. He had travelled to Lisbon to witness the European Cup Final and turned up at Celtic’s hotel in Estoril to ask them to play for him. Thankfully, the Celtic Board accepted his request.

The players arrived back in Glasgow twenty-fours hours after the historic victory in Lisbon and were given five days off before returning to Parkhead on June 1 for training as they prepared for Madrid. However, this was to be no friendly encounter. As Bertie Auld recalled, ‘Alfredo kicked off and was on the pitch for about fifteen minutes and the tempo was hardly above strolling pace. But when he departed, it was a case of, “Let battle commence!” I should know – I was sent off.’ 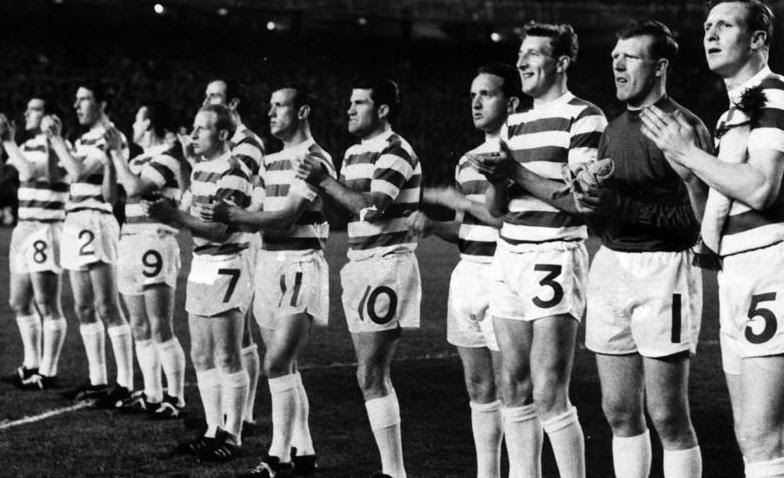 Jim Craig recalled, ‘Jinky could do no wrong that night. I well remember a Real Madrid player, Grosso, I think, racing out of defence in an effort to clatter the Wee Man. Clearly, he had had enough of Jinky’s one-man show and it was his intention to sort him out. Yes, he did wallop Jinky, but if he thought that was the end of my wee pal’s meanderings for the night, he was so wrong.

‘I remember the Real player trotting back into defence, probably thinking to himself, “That takes care of that.” His face was a picture, though, when he looked over his shoulder to see the Wee Man bouncing back to his feet to take the free-kick. I suppose he thought his opponent would fold under such treatment, but he didn’t know our Jimmy Johnstone. He was unstoppable that evening.’

Gemmell added, ‘Jinky was really excited at playing in the Bernabeu for Di Stefano. As soon as the game was announced after Lisbon, it was all he could talk about. I had the feeling the Wee Man might put on something special. Something special? That’s a massive understatement. Big Jock sensed it, too. Before the kick-off, he told us, “Get the ball to Jinky. We’re here to entertain and win. We want to show these fans that Celtic are worthy European champions. Jinky will be the main man tonight. Make sure he gets that ball.”

‘And, if you ever see footage of that game, you’ll see that we carried out his instructions. Jinky was given a roving commission for the evening and he was popping up everywhere. There were a couple of occasions when he came deep into our own half just to receive a pass and then take off in the general direction of enemy territory.

‘Aye, they tried to kick him, but that never bothered the Wee Man. I never once saw him take a dive. If he went down, you knew he had taken a sore one. But he was always quickly back to his feet. I’ve said this before and no doubt I’ll say it again, but Jinky was incredibly brave. When we talk about Jinky, inevitably we discuss his special talents, his mazy runs that would leave defender after defender in his wake. Rarely, though, does his bravery crop up in these conversations.

‘And with that, he would continue to take the ball right up to his opponent, swivel those mesmerising hips and take off, either on the outside down the wing or inside into the traffic. I couldn’t help but admire that wee chap.’

TOMORROW: ‘They were frightened to come near me,’ Wee Jinky.