Celtic Quick News on News Now
You are at:Home»Exclusive Series»THAT SEASON IN PARADISE: MAY: ‘THE WEE MAN WAS DIFFERENT CLASS’
By CQN Magazine on 14th April 2020 Exclusive Series

Today, the author continues his look at the unselfish role played by Jimmy Johnstone in the glorious triumph over Inter Milan in the European Cup Final on May 25 1967 in Lisbon.

BERTIE AULD recalled, ‘I could hardly believe my ears when I heard Jinky apologising to us. There was so much going on around me that I thought I had picked up the Wee Man wrong. “What are you saying, Jinky?” I asked. He was an emotional guy and was close to tears as he repeated, “Ah’m really sorry. Ah let youse doon.”

Celtic had just beaten the famed Inter Milan 2-1 to win the European Cup, the biggest club football prize of them all, and there was Jinky saying he was sorry. I knew him better than most and I realised he wasn’t joking, that this was no act. He really meant it. He thought he had failed his colleagues on the day we turned on an illuminating, devastating ninety minutes that blew away the defensive-minded Italians.

‘I should have been whooping it up, celebrating with my team-mates and here I was consoling Jinky. “What are you talking about?” I said. “You were one of the best players on the pitch. You and Bobby Murdoch were just brilliant.’ ” Jinky looked up, “Do ye really mean that, Bert? Ye’re no’ just sayin’ that?” I assured him I meant every word and, even years later, when Jinky and I were on our own, he would still ask, “Me and Bobby, best men on the pitch in Lisbon, Bert? Ye huvnae changed yer mind?” For goodness sake, we had both been out of football for decades and he was still seeking reassurance!

‘I’ll always remember the laugh we had in the tunnel before the game. There we were lining up and these guys from Inter Milan looked like gods, never mind footballers. I recall they were all immaculate, there wasn’t a hair out of place. They oozed glamour. Their blue-and-black tops had been hand-pressed by an expert. A lot of us were standing there minus our false teeth. It didn’t look like a fair fight. I looked at Giacinto Facchetti, their world-famous left-back. He was about 6ft 3in and was such an imposing figure. He looked as though he had stepped straight out of a sportswear catalogue.

‘I turned to Wee Jinky and motioned towards one of their players with my head at one of their players. “Hey, wee man did I not see that bloke in that movie with Marcello Mastroianni? Did he not get off with Anita Ekberg in La Dolce Vita?” Wee Jinky looked back, puzzled. I indicated another of their players, “Did he not used to go out with that Sophia Loren?” We were all having a good laugh and the Italians simply looked bemused. I heard mutterings of ‘loco, loco’ among their ranks. They really didn’t know what they were up against. “Hail! Hail! The Celts are here,” bounced around the walls of the tunnel. We kept it up all the way until we got the okay to, at last, walk out onto the track.

‘Big Billy, of course, was first out, chest proudly expanded to its maximum. In order, our captain was followed by Ronnie Simpson, Tommy Gemmell, John Clark, yours truly, Bobby Lennox, Stevie Chalmers, Jimmy Johnstone, Willie Wallace, Jim Craig and Bobby Murdoch. Reserve keeper John Fallon came next with his lucky teddy bear and then out strode Jock Stein alongside Neilly Mochan, our trainer, with assistant boss Sean Fallon and physiotherapist Bob Rooney following on. If you get the opportunity to watch footage of the teams strolling out onto the track and then onto the playing surface have a look at the Italians. A lot of them are actually eyeing us up and down and shaking their heads. They were just a tad bemused. They were going to get a lot more bemused by time-up, that was certain! 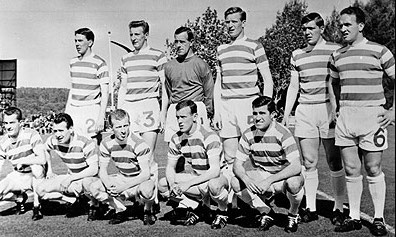 ‘Okay, Wee Jinky thought he under-performed against Inter. Frankly, I knew the Wee Man could be a humble bloke, but I found it simply unbelievable that he would genuinely reckon this was the case. I heard not that long ago that my old team-mate Davie Hay had named me as Celtic’s top player that day. Thanks, Davie, but you’ve got the wrong man; Wee Jinky was streets ahead of anything I conjured up against Inter.

‘That Wee Man was different class, on and off the field. That day in Lisbon will be forever remembered for my big pal Tommy Gemmell’s spectacular equaliser and Stevie Chalmers’ winner five minutes from time, but I thought Jinky was immense in a thoroughly unselfish, totally professional performance. We were all aware of what he could do with a ball. He could take it for a stroll in his early years at the club and no-one else would get a kick for about five minutes. Then he would lose possession and leave everyone sucking out their fillings.

‘Against Inter Milan, he put in a wonderfully-disciplined display against one of the toughest defenders in the world, Burgnich, who was also an experienced international. Big Jock had told Jinky to take Burgnich for a walk and drag him all over the place. That would unsettle their defence because he was undoubtedly the rock in their backline. Giacinto Facchetti was supposed to be the greatest attacking left-back on earth back then, but I think we all knew who was the real deal, the genuine article after Lisbon – Big TG, Tommy Gemmell. What a game he had; simply mind-blowing. 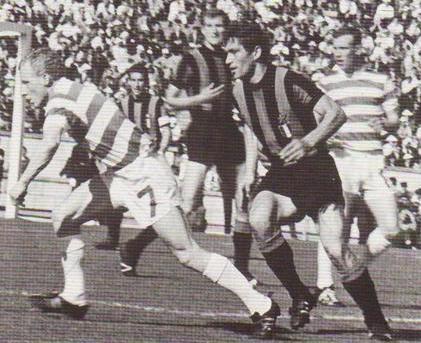 ON THE RUN…Jimmy Johnstone darts past an Inter Milan defender.

‘Cairney, Jim Craig, was like TG, a complete athlete and he was getting up and down that right wing as often as possible as we pounded the Italians. Jinky deserved every accolade and so, too, did my mate Bobby Murdoch. He was a big guy, with that barrel chest of his, but he had the touch of an angel. He didn’t kick the ball, he caressed it. He was immense, but, to be honest, we won and lost as a team and we all played our part that day.’

Jim Craig chipped in, ‘I don’t think Jinky ever received the credit he deserved for his performance against Inter. He didn’t appear to be involved in the key points of the game, but, believe me, he pulled their player, Burgnich, all around the pitch to make openings for others. I’m sure if Jinky had hopped on a bus to take him into Lisbon town centre, the Italian would have gone with him!

‘We, the players, knew what he contributed against Inter. Wee Jinky was discipline personified and we all realised he was at his happiest skipping down the wing on one of those unbelievable, hip-swerving runs, leaving distraught defenders tackling fresh air.

‘The European Cup Final was his stage, it was his platform to produce another glorious performance of stunning variety that would have undoubtedly mesmerised watching millions on the many TV sets tuned into the game throughout the globe. Without any debate, he possessed the individual skills to take the spotlight in the biggest game of his life. However, he sacrificed all that in Lisbon for the cause of the team. No-one will ever forget that. Nor will we ever forget him.’

Jock Stein once famously said, ‘People might say I will be best remembered for being in charge of the first British club to win the European Cup or leading Celtic to nine league championships in a row, but I would like to be remembered for keeping the Wee Man, Jimmy Johnstone, in the game five years longer than he might have been. That is my greatest achievement.’

Jimmy Johnstone, rightly, was voted Celtic’s Greatest-Ever Player by the supporters in 2002. With typical humility, he said, ‘I thought the honour would go to Henrik Larsson.’