Celtic Quick News on News Now
You are at:Home»Latest News»‘THAT’S HOW IT IS TO BE AT CELTIC,’ AJER
By CQN Magazine on 26th December 2017 Latest News

CELTIC’S teenage defender Kristoffer Ajer believes that the imminent arrival of experienced German defender Marvin Compper at Celtic can help him develop as a player and in doing so establish himself as a first choice pick in the side.

The 19 year old Norwegian has been outstanding in Celtic two wins at Parkhead this week and with a trip to Dundee this lunchtime and then the visit from Sevco Rangers on Saturday, Ajer will be looking to start, keep two more clean sheets and help the team pick up six more valuable points which will go a long way to securing seven in a row.

Then he will be looking to welcome Compper and learn from him.

“Marvin’s a great player who has done brilliant things in the Bundesliga. It will only help me a lot to see how he plays and learn from him,” Ajer said.

“I think there are fantastic centre-halves here and that’s why I’m developing here. I’m learning every single day from all of them in training and listening to what they tell me.

“It’s really good to play beside them now. That’s how it is to be at Celtic. It’s a great squad where everyone wants to play and that pushes you to play your best every game.

His progress is there for all to see and his two outstanding performances has had manager Brendan Rodgers raving about the Norwegian.

“It’s a great feeling keeping clean sheets in two games. We’re performing well now so we just have to keep it going,” he said. 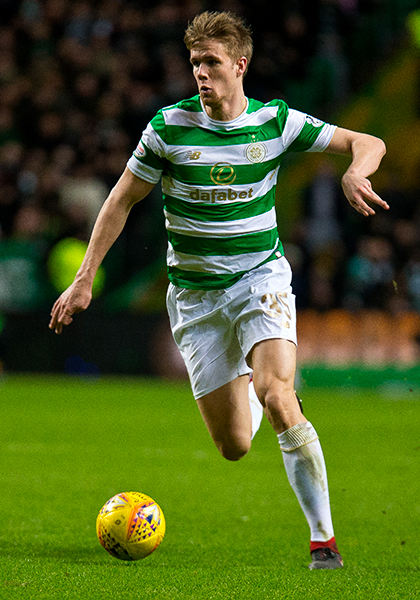 “We really bounced back at home to Partick too and against Aberdeen we had a great game.

“When you play for Celtic there is pressure in every game. Everyone wants you to win and we expect to win as well.

“The players, the staff and the gaffer have done an amazing job for me.

“Since I came in I developed so much this year. I understood I was coming to one of the biggest clubs in the world.

“When you’re 17, when you sign there’s a massive step to break into the team.

“It was really good for me to go out on loan to Kilmarnock to get game-time there.

I know there are fantastic centre-halves at this club who want to play too so it’s difficult to break into the team.

When you get into the team you have to perform.”