Celtic Quick News on News Now
You are at:Home»Latest News»‘THAT’S ME UP AND RUNNING,’ GRIFF
By CQN Magazine on 25th July 2019 Latest News

The comeback striker went a long way to banishing seven months of torment with one swish of his left boot as the minutes ticked down to half-time with Celtic leading 2-0 against the Estonians of Nomme Kalju in the first leg of their Champions League second round qualifier last night.

In a wonderful and emotional instant, Parkhead was magically transformed into Paradise once more as Griffith’s 25-yard free-kick flew unerringly into the top left-hand corner of the keeper’s net as the forward claimed his first goal since another deadball strike against Hamilton Accies on November 24 last year.

Last time out, the 28-year-old Scotland international completed a difficult campaign with a mere six goals to his name. However, his soaring effort on the Hoops’ way to a commanding 5-0 advantage will undoubtedly provide the springboard for better things to come for the popular frontman.

It was the player’s first start in competitive action in 2019 and only his second appearance in a game of importance since his 13-minute cameo against FK Sarajevo in the 2-1 triumph the previous week.

An elated Griffiths, speaking to the club website, admitted: “You can tell by my reaction how much I enjoyed it. 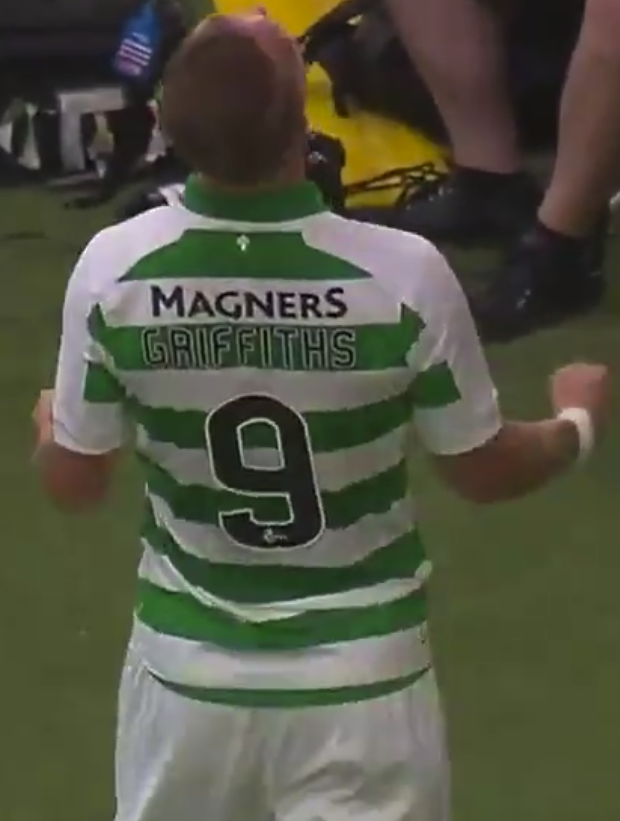 “Words can’t describe how good a feeling that was when the ball hit the back of the net. I had a great feeling as soon as it left my foot and got over the wall. Scott Bain said that from his view behind me, he just knew it was in. I’m absolutely delighted.

“It was emotional. My last goal for Celtic was a free-kick away to Hamilton, so it was nice to get another one. I would have taken a one-yard tap in, if I’m honest.

“It’s nice to be up and running and I was delighted to get back on the scoresheet.”

Griffiths, referring to his double deadball salvo in the 2-2 draw World Cup qualifier in June 2017, added: “It’s up there with the England goals, right at the very top.

“I tried a free-kick earlier in the game and it didn’t quite come off, but Broony almost scored from the rebound. Big Jozo said to me just before I hit it, as soon as I get it over the wall, it’s going in. Sure enough after it goes in, I celebrated with him and he said: ‘I told you’.

“So much hard work’s been put in, not just by me, but the backroom staff and everybody connected with me who have worked so hard to get me back on the pitch.

“I can’t score goals without my team-mates, so the biggest thank you goes to them. Hopefully that’s just the start.

“That’s me up and running now in the season and, hopefully, there’s more to come.”